Streaming video services invest heavily in technology to improve their ability to show users a set of personalized recommendations about what to watch next. But according to a new research study released today by UserTesting, it seems that consumers aren’t watching much recommended content — in fact, only 29 percent of the study’s participants said they actually watched something the service recommended.

On some services, those figures were extremely low — for example, only 6 percent of HBO NOW users said they watched recommended content.

That’s probably because consumers found it difficult to locate HBO NOW’s recommendations in the first place. The service was given a low 16.8 “customer experience” score on this front, the study says. That’s a much lower score than all other services analyzed, including Netflix, Amazon Prime Video, Hulu and YouTube TV — all of which had scores in the 80s. (See first chart, below). 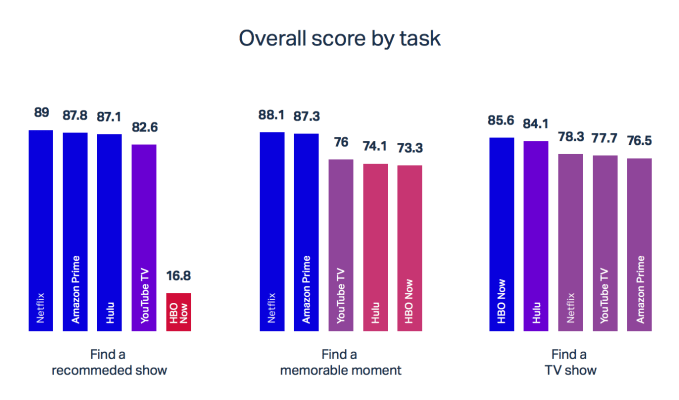 To be fair, HBO NOW doesn’t really do recommendations in the same way as the others.

Its app offers a “Featured” selection of content for all users, and, if you scroll down there are a couple of editorial collections, like “Essential HBO” or “14 Hidden Gems You Missed the First Time.” A separate “Collections” section includes more of these suggestions, like “New Movies,” “Just Added,” “Last Chance” and others.

The lack of personalized, easily located recommendations also impacted HBO NOW’s overall score in the UserTesting study, which rated the services across a variety of metrics, including availability of content, friction-free viewing, ease of scrubbing and episode scanning and other factors. HBO NOW was also dinged by survey respondents for lagging, freezing and buffering issues, though they said they appreciated its clean design.

Netflix’s overall score was 89.5, making it the highest-rated streaming service among those analyzed due to having the most relevant recommendations, overall high ease-of-use and a speedy service. It was followed by Hulu (86.8), Amazon Prime (85), YouTube TV (80.7) and then HBO NOW (71.8).

Coincidentally, Netflix also just beat HBO in a survey related to consumer appreciation for original programming, put out by Morgan Stanley. Indeed, 39 percent of respondents in that survey said Netflix had the “best original programming” compared with HBO’s second place rank of 14 percent. 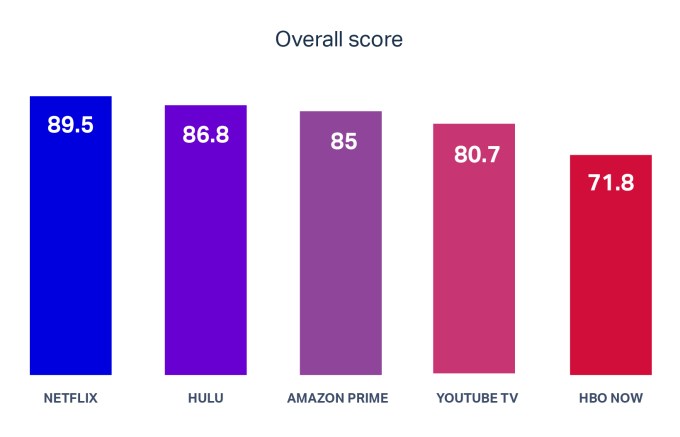 UserTesting’s study also backed up earlier research from Deloitte, as it found that subscription video customers are having to subscribe to more than one service to find all the content they want to watch.

More than half said they subscribe to at least two apps. For example, 90 percent of HBO NOW customers also subscribed to Netflix, while 80 percent subscribed to Amazon Prime.

The study additionally found that much of viewing (45 percent) takes place on TV or via streaming media devices like Roku, Apple TV or Amazon Fire TV. Thirty-seven percent preferred laptops, and 11 percent said their smartphone or tablet was their primary streaming device. For some services, TV viewing is even higher — Hulu recently said that the majority — 78 percent — takes place on TVs.