Without a chronological feed, it can be tough to tell if you’ve seen all the posts Instagram will show you. That can lead to more of the compulsive, passive, zombie browsing that research suggests is unhealthy as users endlessly scroll through stale content hoping for a hit of dopamine-inducing novelty.

But with Instagram’s newest feature, at least users know when they’ve seen everything and can stop scrolling without FOMO. Instagram is showing some users a mid-feed alert after a bunch of browsing that says “You’re All Caught Up – You’ve seen all new post from the past 48 hours.” When asked about it, Instagram confirmed to TechCrunch that it’s testing this feature. It declined to give details about how it works, including whether the announcement means you’ve seen literally every post from people you follow from the last two days, or just the best ones that the algorithm has decided are worth showing you.

[Update 7/22018: Instagram is now officially rolling out the “You’re all caught up” warnings to all iOS and Android users.]

The feature could help out Instagram completists who want to be sure they never miss a selfie, sunset or supper pic. Before Instagram rolled out its algorithm in the summer of 2016, they could just scroll to the last post they’d seen or when they knew they’d last visited. Warning them they’ve seen everything could quiet some of the backlash to the algorithm, which has centered around people missing content they wanted to see because the algorithm mixed up the chronology.

But perhaps more importantly, it’s one of the app’s first publicly tested features that’s clearly designed with the “time well spent” movement in mind. Facebook CEO Mark Zuckerberg has been vocal about prioritizing well-being over profits, to the point that the network reduced the prevalence of viral videos in the feed so much that that app lost 1 million users in the U.S. and Canada in Q4 2017. “I expect the time people spend on Facebook and some measures of engagement will go down . . . If we do the right thing, I believe that will be good for our community and our business over the long term too,” he wrote.

Instagram’s Do Not Disturb and “Caught Up” deter overgramming

But Instagram’s leadership had been quiet on the issue until last week, when TechCrunch broke news that buried inside Instagram was an unlaunched “Usage Insights” feature that would show users their “time spent.” That prompted Instagram CEO Kevin Systrom to tweet our article, noting “It’s true . . . We’re building tools that will help the IG community know more about the time they spend on Instagram – any time should be positive and intentional . . . Understanding how time online impacts people is important, and it’s the responsibility of all companies to be honest about this. We want to be part of the solution. I take that responsibility seriously.” 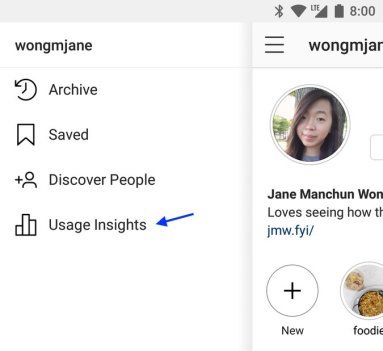 Instagram is preparing a “Usage Insights” feature that will show how long you spend in the app. Image via Jane Manchun Wong

It’s reassuring to hear that one of the world’s most popular, but also overused, social media apps is going to put user health over engagement and revenue. Usage Insights has yet to launch. But the “You’re All Caught Up” alerts show Instagram is being earnest about its commitment. Those warnings almost surely prompt people to close the app and therefore see fewer ads, hurting Instagram’s bottom line.

Perhaps it’s a product of Facebook and Instagram’s dominance that they can afford to trade short-term engagement for long-term sustainability of the product. Some companies like Twitter have been criticized for not doing more to kick abusers off their platforms because it could hurt their user count.

But with Android now offering time management tools and many urging Apple to do the same, the time-well-spent reckoning may be dawning upon the mobile app ecosystem. Apps that continue to exploit users by doing whatever it takes to maximize total time spent may find themselves labeled the enemy, plus may actually be burning out their most loyal users. Urging them to scroll responsibly could not only win their favor, but keep them browsing in shorter, healthier sessions for years to come.