Twitter is giving developers more time to adjust to its API platform overhaul, which has affected some apps‘ ability to continue operating in the same fashion. The company clarified this morning, along with news of the general availability of its Account Activity API, that it will be delaying the shutdown of some of its legacy APIs. That is, APIs originally slated for a June 19, 2018 shutdown – including Site Streams, User Streams, and legacy Direct Message Endpoints – will now be deprecated on Wednesday, August 16, 2018.

The news follows an announcement from Favstar that said it will end its business when the older APIs are shut down for good. And it follows the relaunched Mac app from Tweetbot, which includes a list of changes as to how the app will work when the API changes go into effect.

Twitter had said back in April that it would delay the scheduled June 19th deprecation date, but didn’t announce a new date at that time. That may have led some developers to believe that a longer reprieve was in order while Twitter rethought its plans.

With the public launch of the Account Activity API, developers can transition to the new API platform.

Plus, the beta that only offered Direct Messages is being shut down on August 16th, 2018, Twitter says. (Migration details on that are here.) 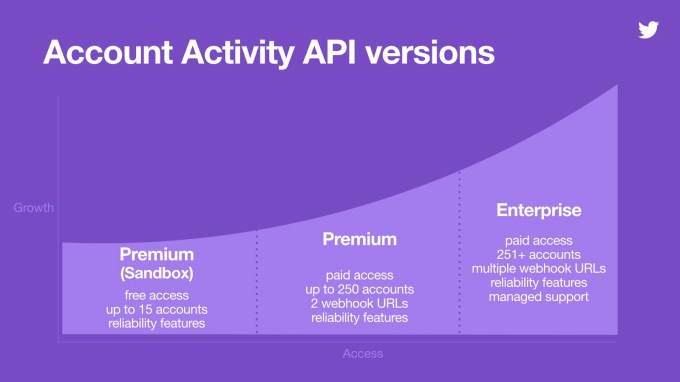 Twitter is also reducing the number of subscriptions from the 35 accounts allowed during the beta to 15 free subscriptions for its Premium Sandbox of the API – the free tier meant as way for developers to experiment. The paid Premium tier offers up to 250 accounts, and Enterprise pricing is available, too. (See chart below).

But developers will have to reach out to Twitter directly to receive enterprise pricing details. 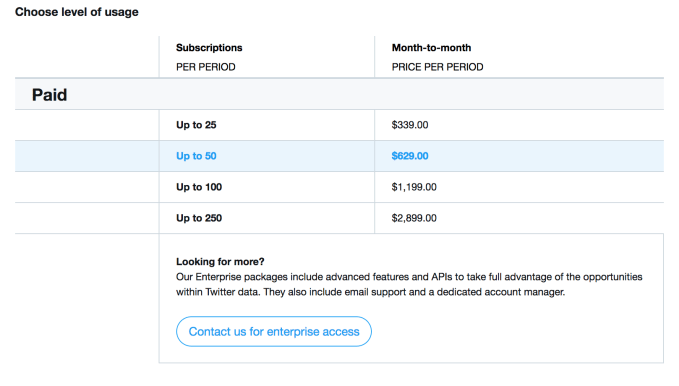 In addition, Twitter makes it clear that any apps that rely on the older Site Streams and User Streams APIs, will have to live without that functionality after August 16th. It claims this won’t affect most apps – only a small percentage.

“As a few developers have noticed, there’s no streaming connection capability or home timeline data, which are only used by a small amount of developers (roughly 1% of monthly active apps),” writes Twitter Senior Product Manager, Kyle Weiss, in a blog post. “As we retire aging APIs, we have no plans to add these capabilities to Account Activity API or create a new streaming service for related use cases.”

Well, at least the announcement addresses developers’ complaints about a lack of information from Twitter regarding the pricing of the new APIs, and how long before all the changes kick in, given the news of a delay.

As Favstar’s creator Tim Haines explained when announcing the app’s shutdown, the lack of information made running its business too difficult.

““Twitter… [has] not been forthcoming with the details or pricing. Favstar can’t continue to operate in this environment of uncertainty,” he told TechCrunch earlier this week.

As for those 1 percent of apps that use the soon-to-be-depracated APIs – like Talon, Tweetbot, Tweetings or Twitterific – the plan was to switch over to the Enterprise Account Activity API. But they were frustrated that Twitter wasn’t saying how much it would cost; so they didn’t know if it would be an affordable option to sustain their business. It looks like they’ll now get those details.

But as those developers pointed out recently, there were broader concerns that the API changes were meant to actively discourage “client apps that mimic or reproduce the mainstream consumer client experience,” as Twitter had once said. Unfortunately for end users, the company’s decision is especially frustrating, given that Twitter shut down its native Mac app.

It does appear that Twitter is looking to impact the functionality of these “1 percent” of apps, given that it will no longer let them stream in tweets as they’re posted (it’s making the statuses/home_timeline endpoint available instead – which is not streaming). And other notifications will be delayed by a couple of minutes, in some cases, as Tweetbot’s creator, Paul Haddad, explained yesterday.

Along with the news today, Twitter shared links to resources to help developers migrate to new APIs and learn more – including the developer portal, a migration guide, a resources page that outlines these changes, and Twitter’s community forums.