As Twitter develops an ever-closer hold on how it manages services around its real-time news and social networking service, a pioneer in Twitter analytics is calling it quits. Favstar, an early leader in developing a way to track and review how your and other people’s Tweets were getting liked and retweeted by others on the network, has announced that it will be shutting down on June 19 — a direct result, its creator Tim Haines notes, of changes that Twitter will be making to its own APIs, specifically around its Account Activity API, which is coming online at the same time that another set of APIs, which include User Streams and Site Streams, is being depreciated.

Favstar and others rely on the older set of APIs to power their services (Favstar specifically uses Site Streams). “Twitter… [has] not been forthcoming with the details or pricing,” Favstar’s creator Tim Haines said of the newer API. “Favstar can’t continue to operate in this environment of uncertainty.”

Favstar’s announcement was made over the weekend, but the issue for it and other developers has actually been brewing for a year.

Twitter announced back in December that, as part of the launch of the Account Activity API (originally announced April 2017), it would be shutting down User Streams and the others on June 19.

User Streams and Site Streams are what Favstar, and a number of other apps such as Talon, Tweetbot, Tweetings, and Twitterrific (as pointed out in this blog post signed by all four on “Apps of a Feather”), are built on. Introduced as the Twitter Streaming API for developers, the aim was to provide a way for developers to get continuous updates from a number of Twitter accounts — needed for services that either provided alternative Twitter interfaces or a way of parsing the many Tweets on the platform — in a way that did not slow the whole service down.

The newer Account Activity API provides a number of features to developers to help facilitate tracking Twitter and using services like direct messaging for business purposes: 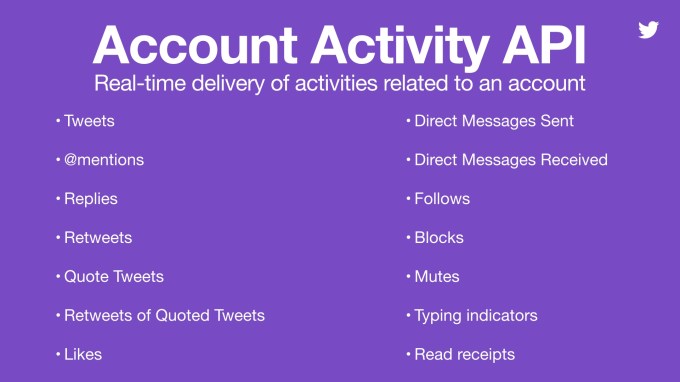 As you can see, some of the features that the newer API covers are directly linked to functionality you get via Favstar. The crux of the problem, writes Haines, is that Twitter hadn’t given Favstar and other developers that had been working with the older APIs (and other depreciating functionality) answers about pricing and other details so that they could see if a retooling of their services would be possible. (Twitter has provided a guide, it seems, but it doesn’t appear to address these points.)

The post on Apps of a Feather further spells out the technical issues:

“The new Account Activity API is currently in beta testing, but third-party developers have not been given access and time is running out,” the developers write. “With access we might be able to implement some push notifications, but they would be limited at the standard level to 35 Twitter accounts – our products must deliver notifications to hundreds of thousands of customers. No pricing has been given for Enterprise level service with unlimited accounts – we have no idea if this will be an affordable option for us and our users.”

One of the consequences is that “automatic refresh of your timeline just won’t work,” they continue. “There is no web server on your mobile device or desktop computer that Twitter can contact with updates. Since updating your timeline with other methods is rate-limited by Twitter, you will see delays in real-time updates during sporting events and breaking news.”

Favstar has been around since 2009 — its name a tip of the hat to the original “like” on Twitter, which was a star, not a heart. Haines writes that at its peak, it had some 50 million users and was a “huge hit” with those who realised how the network could be leveraged to build up audiences outside of Twitter — including comedians and celebrities, tech people, journalists, and so on. It’s also tinkered with its service over time, and added in a Pro tier, to make it more user-friendly.

Somewhat unusual for a popular app, Favstar appears to have always been bootstrapped.

But there have been two trends at play for years now, one specific to Twitter and another a more general shift in the wider industry of apps:

The first, regarding Twitter, is that the company has been sharpening its business focus for years to find viable, diverse and recurring sources of revenue, while at the same time putting a tighter grip around how its platform is appropriated by others. This has led the company to significantly shift its relationship with developers and third parties. In some cases, it has ceased to support and work with third-party apps that it feels effectively overlap with features and functions that Twitter offers directly.

In the case of Favstar, the service rose in prominence at a time when Twitter appeared to completely ignore the star feature. MG once described the Favorite as “the unwanted step child feature of Twitter. Though it has been around since the early days of the service, they have never really done anything to promote its use.”

Fast forward to today, and Twitter has not only revamped the feature replacing the star with a heart (I still prefer the star, for what it’s worth), but Twitter uses those endorsements to help tune its algorithm, and populate your notifications tab, and to provide analytics to users on how their Tweets are doing. In other words, it’s doing quite a bit of what Favstar does.

And if you think of how Twitter has developed its own business model in recent years, with a push for video and working with news organisations and other media brands, the same early users of Favstar as detailed by Haines (celebs, news and other media organizations, etc.) are exactly the targets that Twitter has been trying to connect with, too.

The other, more general, trend that this latest turn has teased out is the one that we’ve heard come up many times before. Building services dependent on another platform can be a precarious state of affairs for a developer. You never know when the platform owner might simply decide to pull the plug on you. Your success could lead to many users, business growth, and even an acquisition by the platform itself — but it could nearly as quickly lead to your downfall if the platform views you as a threat, and decides to cut you off instead.

Interestingly, there could be some life left in Favstar in another galaxy far, far away. We’ve reached out both to Haines and to Twitter for further comment and will update this post as and when we learn more.

Update: two days after we published this article, Twitter confirmed that a delay it had hinted it would work into the depreciation was now in place. The older set of APIs will now stay up until August 16, three months longer, to allow for developers to migrate or come up with alternative solutions. Twitter also released a basic set of prices for the new Account Activity API. Developers will still have to apply to Twitter if they are looking to cover more than 250 accounts. Judging by the pricing for the smaller tiers — $2,899/month for up to 250 accounts — this may prove to to be too cost-prohibitive for many to use.

Updated with more developments from Twitter, and a small correction: Favstar is currently using Site Streams, not User Streams (both are part of the older stream APIs)