Amazon’s made a slew of acquisitions in the area of smart home services, and now it’s offering a product that brings them together under one roof — your roof.

Amazon has quietly launched a portal offering home security services — which include all the equipment you would need and in-person visits from Amazon consultants to advise and install the kit. The packages are being sold in five price tiers, at a flat fee — no monthly service contracts, a significant disruption of how many home security services are sold today.

The least expensive, $240 for Outdoor Base, gives you an Echo Dot plus indoor and outdoor lighting designed “to make it look like you’re home.” The most expensive tier, $840 for Smartest, includes an alarm siren, motion sensors, safety sensors, a camera, and Echo Dot, the lighting and a video doorbell — potentially rolling in previous security launches from the company like Amazon Key and Cloud Cam. All include two visits from Amazon employees to consult you and help with the installation. 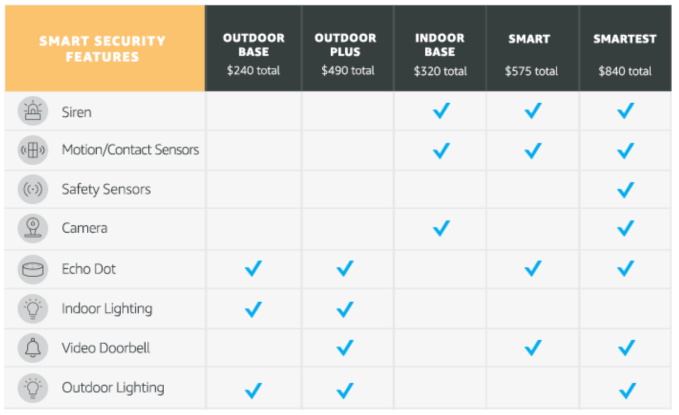 Last July it emerged that Amazon was quietly working on its own answer to Best Buy’s Geek Squad — offering repairs and installations of home WiFi, smart home devices, Alexa installations, and other hardware-related services.

Amazon never appeared to confirm it at the time, but that service now officially seems to be called “Smart Home Services” and it has expanded to Washington, Oregon, California, Arizona, Texas, Nevada, North Carolina, Georgia, Illinois, New Jersey, Washington D.C. and Florida.

The security offering we are describing here — which was initially flagged to us by a reader — falls under that general banner, and it is being promoted at the top of the Smart Home Services homepage. Judging by the user reviews of the consultants, it appears to have been around since at least December.

Giving consumers the option of a more full-service security offering, beyond selling alarms and other devices a la carte, makes sense for a couple of reasons.

The first is that while there are some early adopters who might like the challenge of installing these services themselves, there will be many middle and later adopters who will not be interested in facing that learning curve.

The second is that most often, home security systems are coupled with service installations in your home that include maintenance contracts. So if Amazon hopes to eat up some of that market, it needs to offer something comparable.

It’s an interesting development also of the company’s wider strategy to move into selling services, beyond physical products. Services is one of Amazon’s various efforts to diversify its business by targeting different categories of commerce and different demographics.

Another foray into human-powered services was its Thumbtack-style competitor Amazon Home Services, a marketplace it launched back in 2015 for finding tradespeople and other freelance service providers like masseurs and language tutors. (Notably, Amazon makes a big deal on its security pages of using Amazon employees to install its security systems.)

Earlier this month, it also emerged that Amazon was stealing a march on Apple in smart homes, specifically by inking deals with smart home builders, who were opting for Amazon as their preferred supplier for consulting and installing such services for their home buyers.

A report in The Information noted that one such home builder, Lennar, was “prioritizing Amazon” in its recommendations, while still working with Apple, in part because of the former company’s stronger efforts to integrate with more third-party products, giving buyers a wider range of choices.

Ramping up into security services fits with this, too. Lennar, as it happens, is directly linked now on Amazon’s security homepage, but to be clear, the offering is not exclusive to Lennar homeowners.

We’ve asked Amazon about the security service pages, and the company has acknowledged the question but still has not replied. We’ll update this post as and if we learn more.