When Apple launched its new App Store in iOS 11 back in September, it aimed to offer app developers better exposure, as well as a better app discovery experience for consumers. A new study from Sensor Tower out today takes a look at how well that’s been working in the months since. According to its findings, getting a featured spot on the new App Store can increase downloads by as much as 800 percent, with the “App of the Day” or “Game of the Day” spots offering the most impact.

The app store intelligence firm examined data from September 2017 to present day to come to its conclusions, it says.

During this time, median U.S. iPhone downloads for apps that snagged the “Game of the Day” spot increased by 802 percent for the week following the feature, compared to the week prior to being featured.

Being featured in other ways — like in one of the new App Store Stories or in an App List — also drove downloads higher, by 222 percent and 240 percent, respectively. 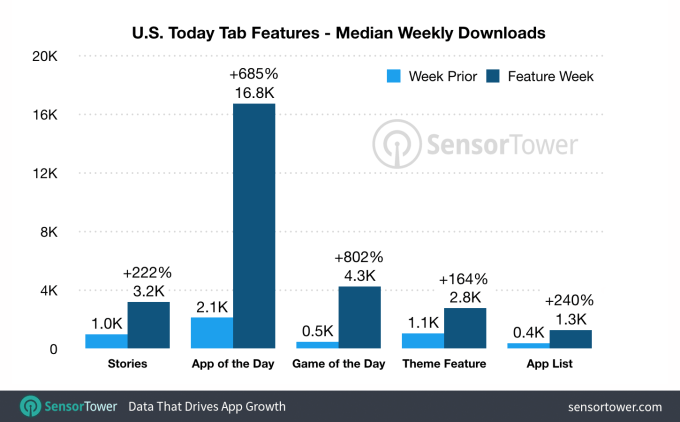 The numbers seem to indicate that Apple is achieving the results it wanted with the release of its redesigned App Store.

Over the years, Apple’s app marketplace had grown so large that finding new apps had become challenging. And developers sometimes found ways to bump their apps higher in the top charts for exposure, leaving iPhone owners wondering if a new app was really that popular, or if it was some sort of paid promotion.

The iOS 11 App Store, on the other hand, has taken more of an editorial viewpoint to its app recommendations. While the top charts haven’t gone away, the focus these days is on what Apple thinks is best — not the wisdom of the masses. Apple has applied its editorial eye to things like timely round-ups of apps; curated, thematic collections; as well as articles about apps and interviews with developers. Apple also picks an app and game to feature daily, so the App Store always has fresh content and a reason for users to return.

The end result is something that’s more akin to a publication about apps, instead of a just an app marketplace.

What’s most interesting, then, in Sensor Tower’s report, are what sort of app publishers Apple has chosen to feature.

Apple had touted the App Store changes would be a way to give smaller developers more exposure. But if you’ve popped into the App Store from time to time, you may have noticed that big publishers — not indies — were having their apps featured. 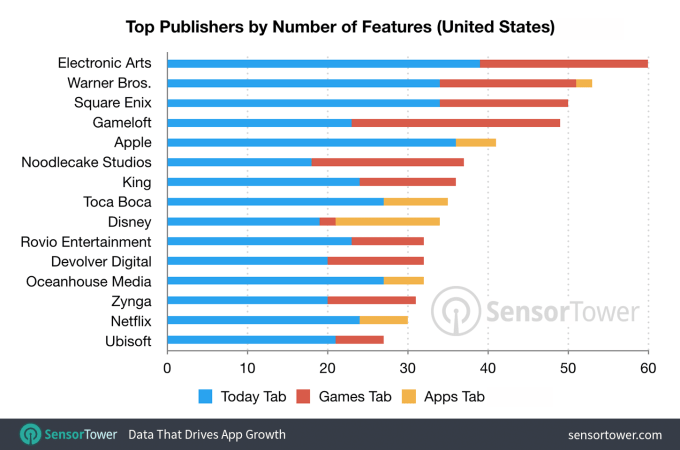 In fact, an early report about the App Store revamp criticized Apple for giving big publishers too much attention. It said that apps from brands like Starbucks and CBS, or game makers like EA and Glu, weren’t exactly hurting for downloads.

But Apple’s favoring of big publishers is only true to a point, says Sensor Tower.

It found that 13 of the top 15 featured publishers (by number of features) had at least one million U.S. iPhone downloads since the launch of the new App Store last September. It’s not surprising that Apple wants to highlight these publishers. Many of them, and particularly the game publishers, have multiple popular apps. So when their apps get an update or they have a new release, consumers pay attention.

Apple, of course, wants to capitalize on that consumer interest because it shares in the revenue app publishers generate through things like paid downloads, in-app purchases and subscriptions.

However, Apple isn’t only giving the limelight to large publishers, says Sensor Tower.

It also found that 29 percent of the apps it has featured since the launch of the revamped App Store were from publishers who had fewer than 10,000 downloads during that time.

“While it’s clearly the case that big publishers are more likely to receive the largest number of features, small publishers still very much have their chance to benefit from a feature on the App Store,” said Sensor Tower’s Mobile Insights Analyst, Jonathan Briskman.

Though Sensor Tower’s published report focused only on the iOS App Store, it’s worth noting how it compares with Google Play.

Getting a featured spot on Google’s app store isn’t as impactful, the firm tells TechCrunch. The largest week-over-week increase to the median it saw there was only around 200 percent.