New research from Apptopia, out today, takes a look at the impact getting featured as the App or Game of the Day on the new iOS App Store has on app downloads. This data is still fairly early, as the revamped App Store only arrived publicly with iOS 11’s release in September. Not surprisingly, the report finds that snagging one of these featured spots can lead to a big boost in app sales, with some days being better than others.

On average, apps received a 1747 percent download boost if featured, and games saw a 792 percent bump.

As a reminder, the daily feature called “App of the Day” and “Game of the Day” arrived in the revamped iOS App Store in iOS 11 as a part of Apple’s new editorial strategy to improve app discovery. Instead of just offering app collections and top charts, the new App Store includes articles about apps, interviews with creators, curated lists, how to guides, and more. 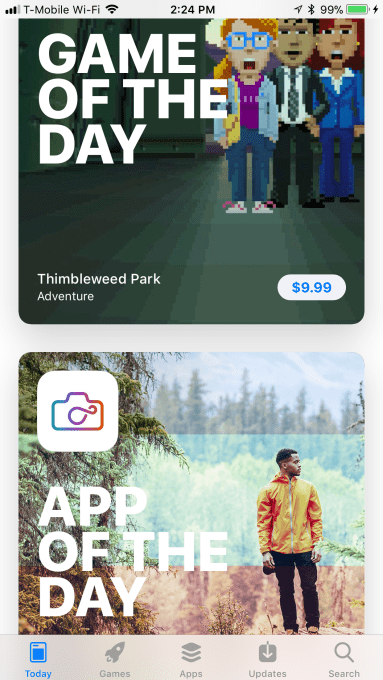 Apple’s larger goal with the App Store makeover is to make it easier for users to find apps to try, and increase downloads for app developers – including, in theory, notable newcomers who may not have the marketing resources to promote their apps through paid advertising and other cash-intensive user acquisition strategies.

With “App of the Day” and “Game of the Day,” Apple’s editorial team picks two iOS apps to recommend to users.

These haven’t consistently been newly launched or indie apps, however, though that can be the case –  like when Apple suggested the recently launched Enlight Quickshot photo editor, for example. But they’re often well-received apps or games, or those that are timely to point to – like when Apple featured The CW’s streaming app just in time for fall premieres.

Apptopia’s COO Jonathan Kay has criticized Apple’s selection, noting that many of the recommendations so far have not been from smaller developers, but rather bigger brands not in need of the extra promotion. For instance, Apple has featured Starbucks, TV apps from The CW, NBC and CBS, EA’s The Simpsons: Tapped Out and NBA 2K18, Microsoft’s Minecraft, Glu Mobile’s Deer Hunter 2017, and others.

In addition, he points out that at least half the apps featured were making $10,000 or more in revenue per day – meaning Apple was also filling its own coffers by featuring these apps, thanks to its cut of app sales and in-app purchases. 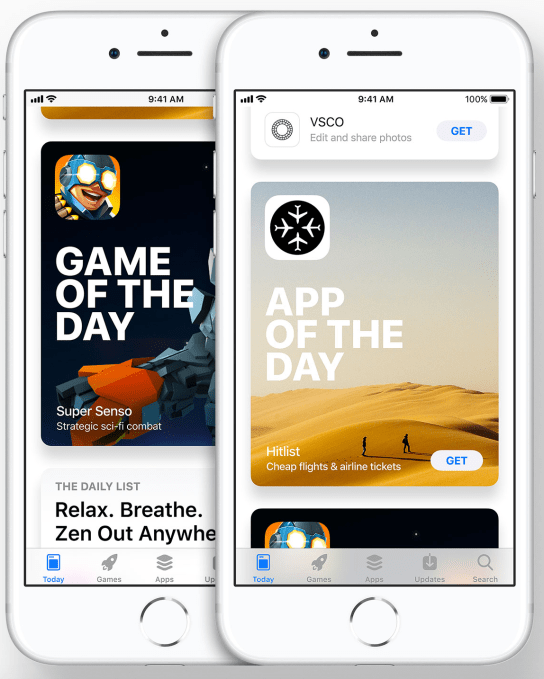 That’s fair, but the daily features aren’t necessarily about promoting new or small-time devs – they’re also about suggesting the must-have apps Apple knows are popular and proven. Meanwhile, smaller developers are often rounded up in Apple’s new collections and daily lists, which likely also bump up their downloads at least a bit.

Plus, some of the developers featured in the articles are smaller – literally – like 13-year-old Donovan Romero-Brathwaite, creator of Gunman Taco Truck, who was recently interviewed for an App Store article.

Download bumps benefit apps over games, are better on weekdays

In any event, getting the featured spot is a big boost for developers, if one is lucky enough to land the position.

Apptopia says it studied 30 days of featured apps and games, and found that, on average, apps saw a 1,747 percent boost in downloads, while games received a 792 percent boost.

We should note that looking at the downloads the day before then after the featuring, as Apptopia is doing here, may not show a full picture of the lasting impact of being highlighted.

After all, you can still scroll down to see past ‘App of the Day’ suggestions, and it could introduce artificial bias. For instance, if an app tends to be most downloaded on Saturdays, but snags the featured spot on a Sunday, it might receive a smaller download boost than if it was compared to a slower download day.

Still, the data does provide a window into the power of the featured position. 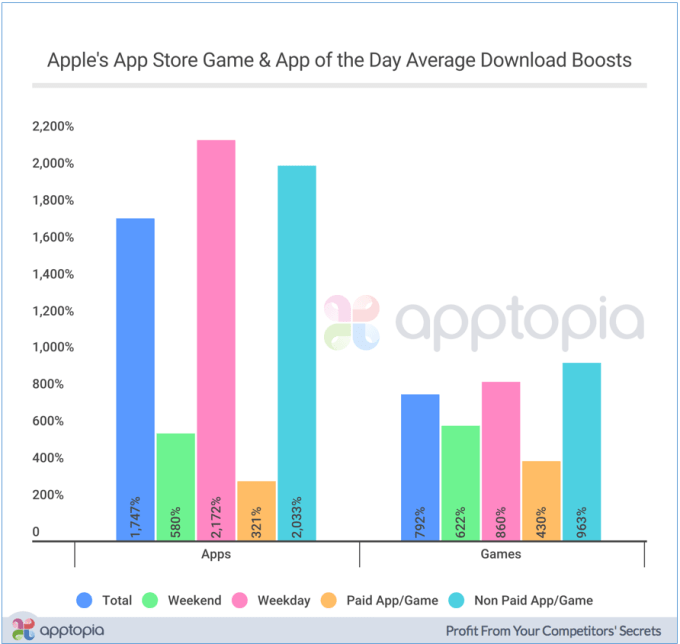 Weekdays saw more downloads than weekends – something that seems a bit odd, as users would seemingly have more downtime to explore the App Store when not at work. But in the case of apps, the weekday download boost was 2,172 percent compared to weekends’ 580 percent. For games, a weekday featuring boosted downloads by 860 percent, compared to 622 percent on weekends. 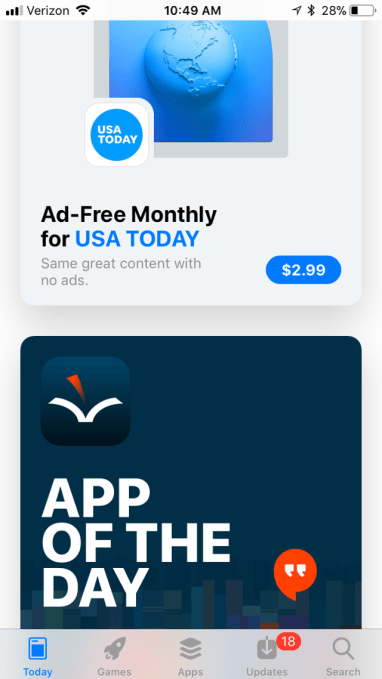 The rapid increase in downloads also impacted the apps’ ranking. Apptopia found that 19 apps went from unranked overall to being ranked in the overall charts. That means some of these had jumped more than 1,000 rank spots thanks to getting featured. If the apps were already ranking in the overall chart, the rank jump was 137 spots, on average.

Overall ranked games, meanwhile, jumped up 321 spots on average, as a result of the featuring. (Only 10 unranked overall games have been selected for Game of the Day, so far.)

The impacts of getting App of the Day status aren’t as notable if the app is already well-known. For instance, when Starbucks was the App of the Day, Apptopia estimates it only received a handful of downloads. After all, nearly everyone knows that Starbucks has an app, and those who want it likely already have it on their phones.

This trend of fewer downloads plays out among the top apps that Apple has featured. For instance, those that were already top 20 apps in their category before getting App of the Day only boosted downloads by 44 percent, on average. For top 20 games, that was 37 percent.