iHeartRadio is best known for its free service offering thousands of live, streaming AM and FM radio stations and its ability to create your own custom station, similar to Pandora. Today, the company is adding a new feature for all users – both free and paid – that blurs the lines between streaming radio and the typically premium-only option of using playlists: Playlist Radio.

Like most playlists, Playlist Radio isn’t a random assortment of songs.

Instead, the songs it plays are curated and programmed by radio DJs and other iHeartRadio staff. That means there isn’t an algorithm deciding what to play next – you’re listening to a selection of songs an actual person has put together.

However, because it’s still “radio” you can’t do some of the things you could with the premium product’s playlists – like reorganizing tracks, adding or removing songs, or playing a particular song in the playlist on-demand. Instead, the songs will play in their given order, though you can skip up to six songs per hour within a playlist – the same as free users have when they’re listening to iHeartRadio’s artist stations.

The addition of Playlist Radio opens up iHeartRadio’s over 1,000 existing playlists to a wider audience.

This includes all nearly the artist-created, genre-based, activity-focused, musical era-focused, and theme-based playlists, with the exception of a handful of playlists that have too few songs to turn into a radio experience.

Before now, those playlists were only available behind a paywall for iHeartRadio Plus, the $4.99/month on-demand music service, and iHeartRadio All Access, which offers unlimited access to millions of songs and offline listening.

In addition, the playlists will be updated every week, save for those where it doesn’t make sense – like those focused on a particular era, like ’60’s music, for example. 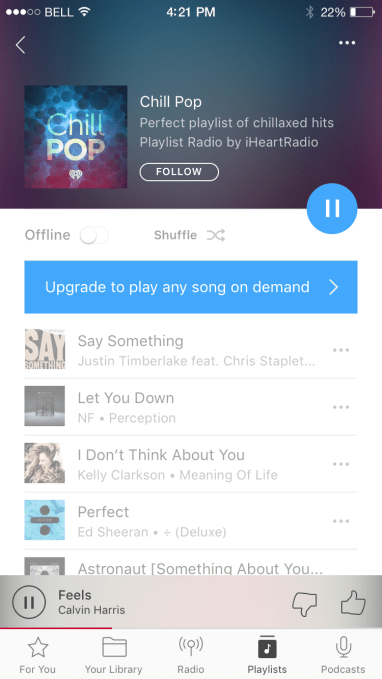 “One of the things we’re most excited about and the area where i feel like we really excel is in music curation,” explains iHeart’s Chief Product Officer, Chris Williams, of how Playlist Radio came to be. “We have some of the greatest music curators on the planet within iHeartRadio. We have the best radio programmers, music directors, and program directors who are out there curating every single day for their radio stations. So we tapped into the resources that we had there, as well as finding some external expertise.”

The idea is that these programmers have already built these great, curated listening experiences, but because free products can only offer radio play as opposed to on-demand streams, the subset of iHeartRadio’s 110+ million registered users who aren’t on a subscription tier were missing out.

However, Playlist Radio could also drive those free users to upgrade, in order to better take advantage of the on-demand options.

“I think it’s exposing a great listening experience to our existing free users, and offering them up a listening opportunity that doesn’t exist on the free tier right now,” says Williams. “I think what radio does a brilliant job at is programming formatically. And I think what Playlist Radio does a great job of is offering listening occasions that are thematic,” he notes. The new products aims to marry the two. 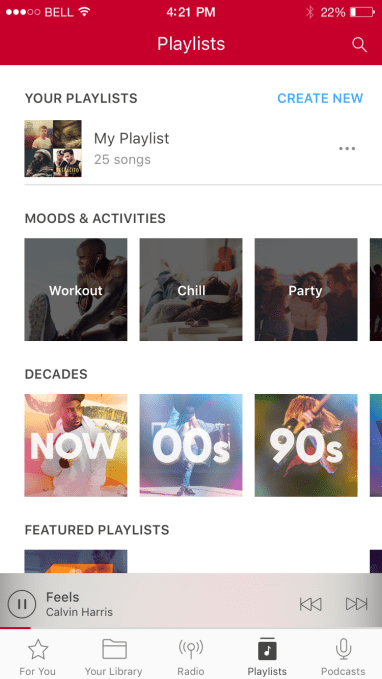 While on-demand music services are growing, there’s an increased interest in lean-back modes of listening, even for on-demand users who can play whatever they choose. For example, Pandora just challenged Spotify with the launch of dozens of personalized playlists based on its Music Genome; and Spotify, of course, is still well-loved for its popular “Discover Weekly” personalized playlist and its curated trendsetters, like RapCaviar.

Of course, the launch also comes at a time when iHeartRadio is facing steep competition from those competitors and others, including Apple and Amazon, in music.

In fact, the streaming service’s parent company, iHeartMedia – which also owns hundreds of radio stations, a concert business, and a 90% stake in Clear Channel Outdoor’s billboard company – recently filed for Chapter 11 bankruptcy. Consumers won’t know the difference when it comes to using iHeartRadio’s streaming service in the near-term. However, Pandora investor Liberty Media (SiriusXM’s owner) was interested in a deal with iHeartMedia which could impact iHeartRadio’s business in the future.

Playlist Radio is rolling out today to all iHeartRadio users on iOS, Android and desktop, before making its way to other platforms.