Just ahead of Spotify’s public debut planned for early April, Pandora is punching its rival where it hurts: personalized playlists. Spotify’s playlists customized to its individual users – like Discover Weekly, Release Radar and Daily Mix – have been a key draw for its service, but Pandora believes it can do even better. The company today is launching its own take on personalization with playlists built to fit users’ moods, activities, and genres, which are all powered by Pandora’s Music Genome.

The Music Genome is Pandora’s biggest asset in its battle with Spotify. This music information database has been in development for over a decade and is capable of classifying music at the song level across 450 different attributes – “genes” that can be as specific as what types of strings are on the guitar, for example.

The Music Genome already powers Pandora’s other personalization efforts, like its Thumbprint Radio, or the feature where it can automatically play similar music when you reach the end of a playlist you created. But it’s never yet been used to build specific playlists for Pandora users like this.

“We’ve been building out, for many years, a collection of well over 75 machine learning algorithms and techniques to help drive content discovery and delivery,” explains Chris Phillips, Pandora’s Chief Product Officer, of the personalization technology. “What we’re doing is what we believe is the bleeding edge of deep learning algorithms,” he says.

At launch, Pandora is capable of creating over 60 personalized playlists – but that doesn’t mean users will log in and see 60 new playlists immediately.

Instead, Pandora will roll them out in response to users’ listening activity. For example, if you’re playing a lot of upbeat pop music, you may see a playlist appear called “Your Party Soundtrack.”

There are also playlists for things like chilling out, focusing, working out, and more, as well as those for various moods – like “happy” or “rainy days” – or favorite genres, like hip hop or pop. And Pandora plans to quickly expand the types of playlists it offers here, with new ones arriving for certain events or cultural activities – like the holidays – and others.

The playlists won’t contain just those tracks you explicitly liked – meaning those you thumbs’d up or added to a playlist of your own. They’ll also surprise you with tracks Pandora believes you’ll like, such as new releases, deep cuts from favorite bands, or other songs that fit well and make sense for you, as determined by Pandora’s algorithms and analysis.

“When we think about what the competition’s doing, they’re really putting more generic buckets of music together,” says Phillips, seemingly referencing Spotify’s personalized playlists. “And they have a generic name for the playlist, whereas I can go right in [to Pandora’s personalized playlists] and say, “oh this is mood I’m in,’ and it’s spot on.”

That’s not to say that other music services don’t have playlists available for users’ moods or activities – it’s just that they’re not personalized to the individual.

In addition, after using Spotify for some time, it can be hard to find the right selection of music you want to hear from its longer list of “Daily Mix” playlists, as it continues to create more mixes over time.

Pandora, on the other hand, is going after a more lean-back experience – something that ties into its radio roots, where it builds custom stations you like and continue to configure with a thumbs up or down. Spotify, meanwhile, has begun to overly rely on the power of its popular curated playlists – like Rap Caviar – to cement its importance in the world of music. (And Rap Caviar’s curator just left Spotify for YouTube.)

Spotify’s more recent launches, in terms of new personalized playlists, haven’t been as innovative as Discover Weekly. It has since rolled out fun – but not as useful – playlists like those that look back on your summer fun, and one with nostalgic tracks from your youth.

Pandora’s new playlists will start rolling out today to Pandora’s Premium subscribers. That’s the top tier of Pandora’s paid offerings, and Pandora’s equivalent to Spotify’s paid tier or Apple Music. If a playlist is created for you, it will appear in the “Browse” section under “Featured Playlists” in the Pandora mobile app. 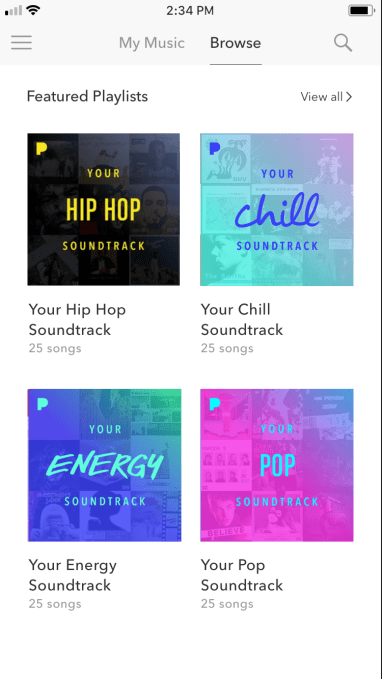 Once live, the playlists will be updated weekly to keep them fresh – so if you want to save a playlist in full, you’ll need to duplicate it to your own collection.

This offers Pandora users a way to temporarily access Premium by watching a video ad first. It’s a way to test drive the Premium product without paying, then transition back to the free radio service after your session. The feature was launched in December, and has since been used by “millions,” Phillips says.

The addition of personalized playlists could help Pandora give its subscription business a jump at a time when it’s starting to see some growth. The company reported in Q4 a 25 percent year-over-year increase in subscribers, which now number 5.48 million. In total, Pandora counted 74.7 million active users in the quarter.

Pandora says a certain percentage of its Premium users will start seeing personalized playlists appear as soon as today.