Netflix this morning announced a series of updates that will make its service more family-friendly, including an additional option to set a PIN code on individual series or movies, as well as improvements to how its content ratings will appear to viewers. The changes are notable in light of Disney’s planned entry in the streaming market in 2019, when it will launch a Netflix competitor, specifically aimed at families, and lacking R-rated content.

Netflix already offers a fairly robust set of parental controls, which followed the company’s decision to focus more on kids, with launch of its “Kids” user interface back in 2011. In addition to setting up individual profiles for each Netflix user in a household, parents could also set PIN controls for all content at a given maturity level. For example, anything rated “Adults” (R, NC-17, NR, UR) could be set to require a PIN code in order to view it. 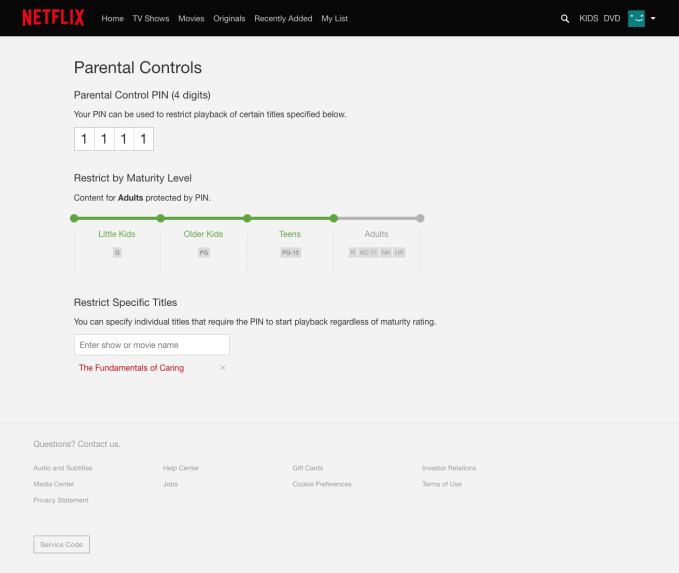 Now, Netflix is adding the option to set PIN codes by individual movies and series, to give parents more control over specific items.

This decision may have been inspired by the controversy surrounding Netflix’s series, “13 Reasons Why,” which tackled issues like sexual assault and suicide. While some parents believed the series helped them have difficult conversations with their teens about these important topics, other parents (and some mental health experts) said it glorified suicide, and was “dangerous.”

This series is precisely the sort of thing parents want to choose if (or when) their children watch; and they’d like to make that decision without necessarily having to set system-wide PIN controls.

In addition to the new PIN option, Netflix says it will also now display the maturity level rating for a series or film once the title begins to play. This will appear at the top-left corner, and will bring increased visibility to the content’s intended audience and why it received that rating (e.g. language, sexual content, etc.). Ratings have become even more helpful in the streaming era, when so much new content is released on a regular basis, much of its originals, all of which is available in one destination – the streaming service itself. In the cable era, kids content would generally be found on its own channel, which made knowing what’s appropriate a lot easier.

Netflix says it’s also exploring other ways to make information about ratings more descriptive and easier for users to understand at a glance – which could signal more user interface tweaks are still ahead.

The move to enhance parental controls is likely only one of the ways Netflix is preparing to do battle with Disney, who will both be competing for subscribers with children.

The new parental controls are rolling out across Netflix’s global markets in the months ahead, the company says.