Some ideas you hear and they immediately make sense. Some take a minute, but the more you think about them, the better they seem. Euveka, a mannequin for clothing designers that can change shape and size in seconds, is the latter — and I think it may eventually be a standard item in any fashion studio and a fair few other industries.

It’s not something I ever really thought about, but designers don’t just create one version of a shirt or jacket and then scale it up and down (well, good ones don’t). They need to design and refit it for different body types, allowing for the many shapes humans take and the ways that shape changes with time or activity.

That means lots and lots of mannequins. Big, small, short, tall, pregnant, broad-shouldered, narrow-hipped and everything else. It would be nice to just be able to dial in the exact size and shape you’re designing for, right?

That’s Euveka. Under the standard soft, pin-friendly cover (stretchable, naturally) is a set of mechanisms that can change all kinds of measurements, quickly and (ahem) seamlessly. 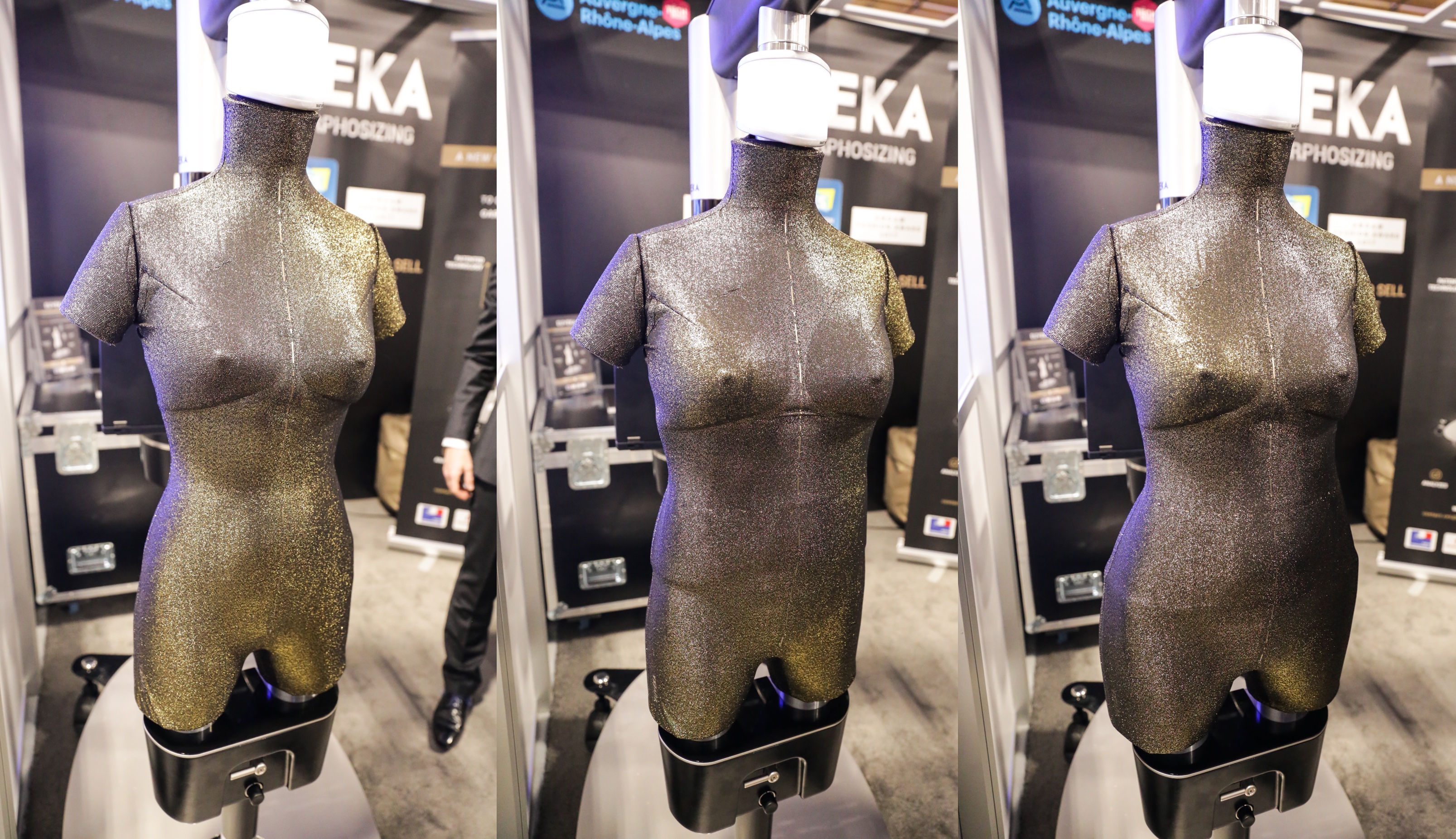 Pretty much any combination of measurements can be put in, mirroring the diversity of human morphology.

Shoulders, bust, chest, waist, hips, thighs and height can be independently adjusted, as well as general, shall we say, robustity — allowing for the realistic replication of body types from a 5′ pregnant woman to a 6’3″ basketball player.

The changes happen over a few tens of seconds, and yet so slowly that you may not even be able to tell when it’s growing, shrinking or otherwise reconfiguring. It’s all done with an attached application that also warns of unsafe pressures or chemicals if they’re detected.

I spoke with Audrey-Laure Bergenthal, president and CEO of Euveka, at CES. She and the others on the team helped expand my mind a bit as to what something like this enables.

“There’s fashion, of course,” she said. “But also medical, sports, security — any time there’s a question of morphology.

She gestured to some gentlemen who had just left the booth. They, she said, were from the French Ministry of the Army. “Soldiers have a certain type of morphology,” she said.

Testing with those actual types could make better uniforms, sure. But she also pointed out that women’s upper bodies differ more broadly than men’s in the military, making bulletproof vests significantly less effective. Tailoring those vests to more body types could literally save lives.

In sports, of course different body types are to be found in different sports, but the bodies also change over time and different bodies change in different ways. Why not have uniforms ready for players before and after spring training? 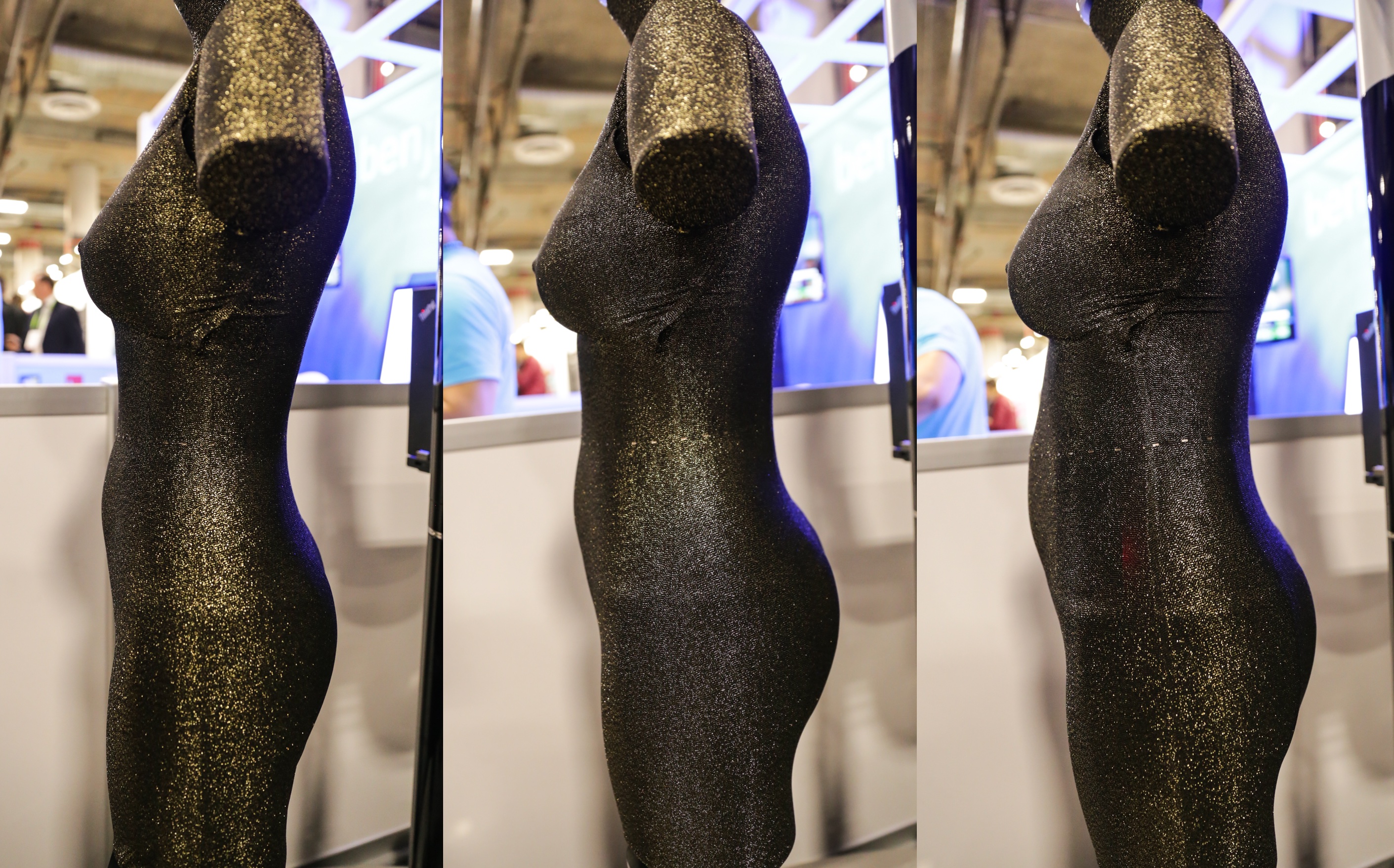 This transition took about 30 seconds.

Again, people in different phases and conditions of life deserve to have well-fitted clothes: older people who have bent forward over time, or people in wheelchairs who have adopted new postures or whose bodies have adapted to a recumbent position.

You could get a different mannequin for each of those bodies and the dozens more you might want over time, or you could get a Euveka.

The most obvious downside is that while a Euveka mannequin can replace dozens, it can only be used for one garment at a time — five traditional mannequins, of course, could wear five, and be worked on by five designers.

Bergenthal said that a Euveka is, realistically, as effective as having 10 mannequins in use by five people. That will differ designer by designer, of course. And there’s no reason you can’t have both.

Well, except the price. This thing ain’t cheap. You can lease one for €3,000 per month, or buy one outright for €96,000. That may explain why their early partners are major fashion houses like Chanel and Louis Vuitton. The army, too, may get in on the fun, assuming the French military is anywhere near as deep-pocketed as our own.

Work is just beginning on the Euveka line, however: R&D is ongoing, Bergenthal told me, both to improve the existing model and to add new parts and shapes. A male mannequin with similar capabilities is underway, as well as arms, lower legs, feet and different postures and spine curves.

Designing for more bodies seems like it should result in better clothes and a healthier industry, not to mention happier consumers. The first Euveka mannequins should be shipping in March.