Dahmakan, a food delivery startup from Malaysia that graduated Y Combinator last year, has raised $2.6 million as it begins to explore the potential to expand its business across Southeast Asia.

The startup distinguishes itself from the likes of FoodPanda and Deliveroo with an “end-to-end” approach to food, that’s to say that it cooks all dishes itself and dispatches them to customers, too. (That’s also called “full-stack” but perhaps “food-stack” is more appropriate.) Most important, it considers its food to be healthy rather than of the junk/variety — that’s just the right note for those (of us) on a New Year-powered health kick.

Last year was a big one for the Kuala Lumpur-based startup. It raised $1.3 million in February and then went on to be part of YC’s summer 2017 program, becoming the first startup from Malaysia to enter the highly rated startup accelerator. This time around, the new round is led by Y Combinator, Texas Atlantic Capital, Swiss family office Atami Capital and a former founder of PE Fund APAX Partners with participation from undisclosed existing backers

Dahmakan co-founder Jessica Li — one of a trio of ex-FoodPandas who started the company in 2015 — told TechCrunch that the new money (which is a pre-Series A) will go towards developing technology and exploring opportunities to expand the business in Southeast Asia, a region where online spending is tipped to quadruple by 2025.

Indonesia and Thailand are two market expansions that are being mulled at this point. 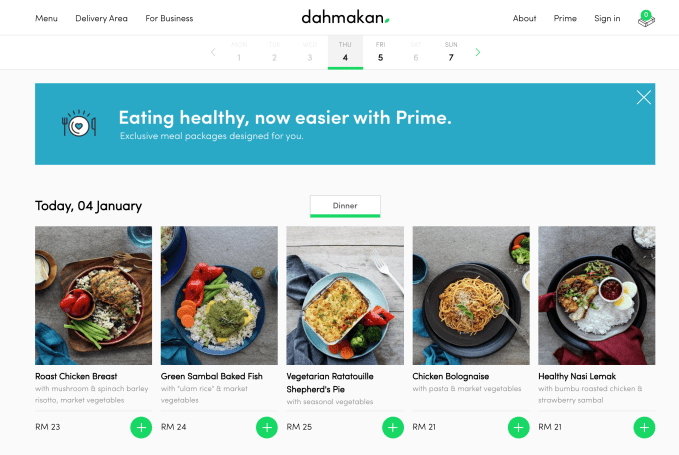 Some of the dinner options available on Dahmakan

On the tech-side, Dahmakan has invested in logistics and artificial intelligence technology to create The Dahmakan Intelligent Operator System (DIOS) which the startup claims is a self-learning system that manages its fleet and customer demand. Unlike others, like say FoodPanda, which operate in partnership with food outlets, Dahmakan delivers at regular meal times so it is able to exercise a lot more control on delivery times.

Rather than ordering at any time, food is delivered to customers in schedule time windows and that’s led to a guarantee that food won’t be late, or customers get their money back.

Beyond an a la carte menu, Dahmakan also offers a ‘Prime’ package that gives customers a discount for buying 10, 20 or 50 meals in bulk, while there are more flexible options for business catering, too.

Controlling all processes in-house appears to be more lucrative than the hit-and-miss approach of food delivery firms, which require vast scale to reach profitability. Dahmakan claims to be unit profitable and it said it has increased month-to-month sales by 20 percent on an ongoing basis since its launch.

FoodPanda, Uber Eats and Deliveroo are among the obvious competitors in the region, but Grain in Singapore is perhaps the closest match to Dahmakan’s end-to-end approach. 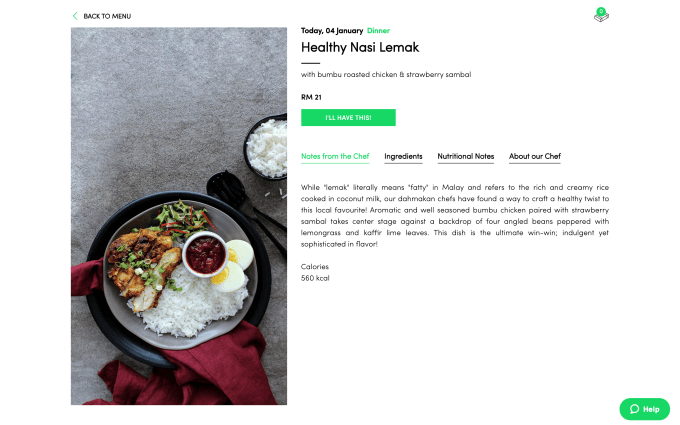