Southeast Asia is now the world’s third largest region for internet users — with more people online than the entire U.S. population — and internet is having a bigger impact on the region than originally thought, according to a new report co-authored by Google.

China and India typically dominate the conversation when looking at emerging economies in Asia, but Southeast Asia is rapidly being acknowledged as a market where the internet is changing daily behaviors and creating new opportunities. A lack of data has traditionally made it difficult to pinpoint that potential but Google and Singaporean sovereign fund Temasek today released an update to their highly referenced 2015 ‘e-Conomy SEA’ report — the main takeaway is that growth has exceeded their initial expectations.

The original report forecast Southeast Asia’s internet economy hitting $200 billion per year by 2025, but now it is estimated that it will top that number, reaching $50 billion in 2017 alone.

Online travel remains the biggest segment for internet-based spending — jumping to $26.6 billion in 2017 from $19.1 billion in 2015 — but e-commerce and ride-hailing saw the highest growth. 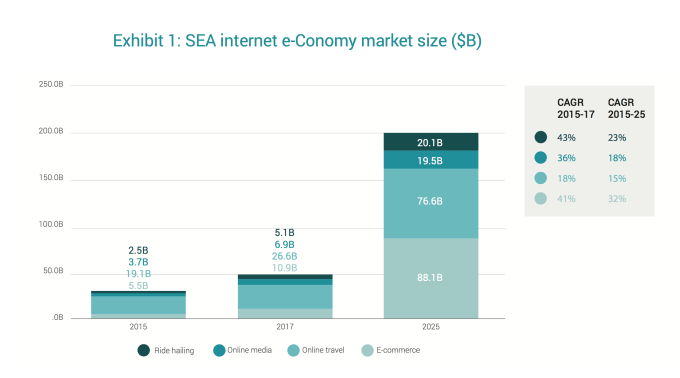 E-commerce, and this does not include second-hand/consumer-to-consumer sales, grew at a compound annual rate of 41 percent to cross $10 billion for the first time in 2017. The e-Conomy SEA project expects it will go on to hit $88 billion by 2025 to become the most lucrative segment. 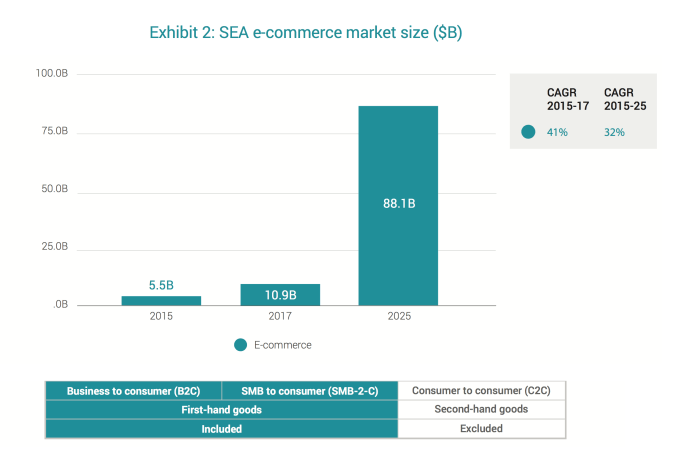 Uber and Grab are battling it out in Southeast Asia’s ride-sharing market, while local unicorn Go-Jek has plans to expand beyond Indonesia, and that competition is reflected in the report’s newest findings.

It concluded that total spend on the taxi apps has more than doubled over the two years to cross $5 billion in 2017. The ride-hailing industry is expected to develop further still and reach $20 billion by 2025, that’s up from an original estimate of $13 billion in the first report. 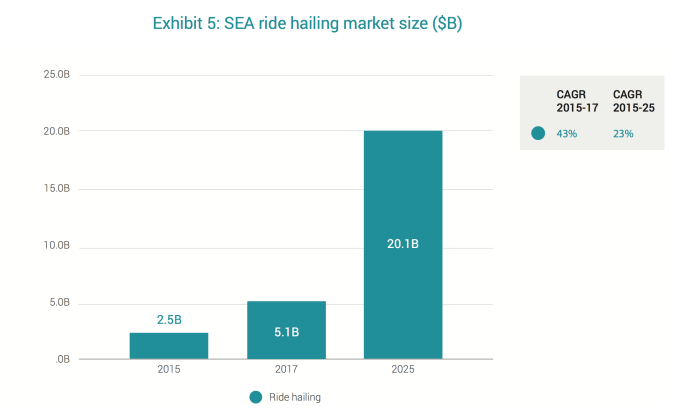 Going into more depth, the study estimated that the number of passengers using ride-hailing apps daily has more than quadrupled since the first study in 2015, while driver numbers are also up 4X.

Here are other nuggets from the report as gleaned by Google:

Full details of the study can be found here.