Amazon’s claims that the Echo Dot was the retailer’s best-selling product all through this holiday season appear to be backed up by the rise of the Alexa app in the U.S. App Store. The companion app for Alexa-powered devices like the Echo, Echo Dot, Echo Show and Echo Spot, grabbed the number one spot for the first time ever on Apple’s App Store on Christmas, and remains there today.

Amazon had said yesterday that the Echo Dot was the top-selling device from any manufacturer across all categories on Amazon.com over the holidays, with millions of units sold. The device, along with Echo Spot and Echo Buttons also sold out, leaving customers to place their name on pre-order lists that will be fulfilled “soon,” the retailer noted.

This demand for Alexa devices has contributed to the Alexa app’s rapid climb from rankings in the 60’s through 90’s earlier this month to the number one position on Christmas Day as Echo owners set up their smart speaker for the first time. 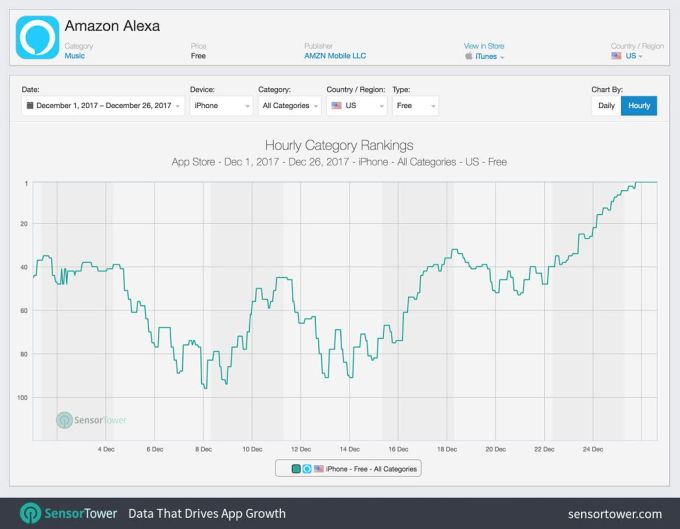 The app’s climb also points to only new Alexa device owners, as the app serves no other purpose but to work with the smart speaker. Plus, an existing Echo owner adding an additional device to their home network would have the app already installed on their phone – they wouldn’t be downloading it again, to give it a rankings boost like this.

Grabbing the App Store’s top spot on Christmas is notable as it points to a consumer trend that’s taking place en masse. Last Christmas, the highest ranking the Alexa app was able to achieve was No. 4, according to data from Sensor Tower.

While the app hit number one in the U.S. this year, it fared well in other markets where Echo speakers are available, too. In the U.K., the app hit No. 2 and in both Germany and Austria it climbed to No. 5. That points to a global holiday trend were people were buying Alexa-powered smart speakers in greater numbers.

In other words, Christmas gift-giving may have allowed Amazon to further solidify its lead in the smart speaker market, despite the increased competition from Google, which has released the Google Home Mini, and the new, high-end Google Home Max to complement its original speaker.

Alexa devices were already quite a bit ahead in the U.S., however, even without the holiday bump. A November Consumer Intelligence Research Partners (CIRP) report said that 20 million Amazon Echo smart speakers had been sold in the U.S., compared with 7 million Google Home devices, for example. It also suggested a market share of 74 percent for Amazon to 26 percent for Google.