Amazon and Google’s feud continues today, as Google is pulling its YouTube app – again – from Amazon’s Alexa-powered Echo Show device. This will be followed by the app’s removal from Fire TV in the near future.

As you may recall, Google wasn’t too happy with the way Amazon had initially implemented YouTube on the Echo Show. It looked different and was lacking a lot of features YouTube users expect. That led to Google pulling access to YouTube for Echo Show device owners earlier this fall.

However, a couple of weeks ago, the YouTube app returned to Echo Show – a signal that seemed to indicate all was well between the companies.

As it turned out, that was not the case.

In fact, Google didn’t even know that Amazon had brought the app back – they learned about it from the press, sources familiar with Google’s situation have told TechCrunch.

Amazon had apparently worked around the block by implementing the web version of YouTube.  This version was also built without Google’s input.

While the original app lacked key YouTube features like channel subscriptions, related videos, commenting and sharing, among other things, the new version of YouTube that replaced it now overlays voice controls on top of the experience, which Google claims is a violation of its Terms of Service. 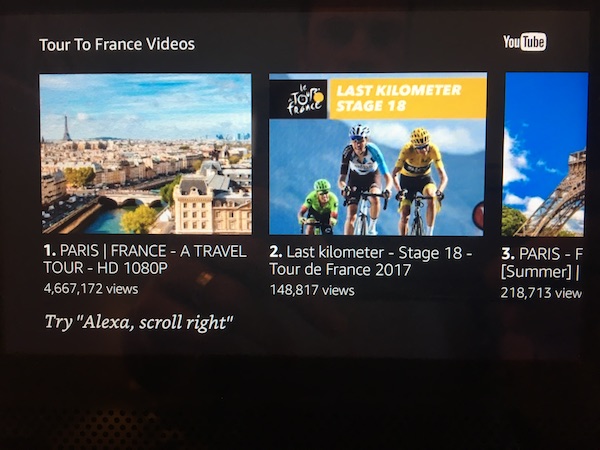 But this feud here isn’t just about YouTube. It’s a broader battle between the two companies which is also tied to Amazon’s more recent decision to pull even more of Google’s products from its online site, where they had previously been available for sale.

Amazon has historically leveraged its dominant position in e-commerce to promote its own products – like Fire TV and Echo – over similar items from competitors, like Chromecast, Apple TV, and a smart speaker from LINE, for example. Today, Amazon doesn’t carry Google products like Chromecast and Google Home and it doesn’t make Prime Video available to Google Cast users.

The nail in the coffin, though, seems to be last month’s decision by Amazon to stop selling Nest’s latest products, too.

This includes the removal of the Nest Thermostat E, Nest Camera IQ and Nest Secure alarm system from Amazon’s online store. Nest was not given an explanation, but the timing of the removal came shortly after YouTube was pulled from Echo Show. Coincidence? I think not.

Previously, Amazon had even marketed Nest devices as “working with Alexa” and listed the thermostat as one of “Amazon’s Choice” picks. In other words, the removal was clearly a coded message to Google to back down on its Terms of Service enforcements regarding YouTube.

The Echo Show version of YouTube will stop working as of today, but Fire TV users will instead be warned that the app will disappear on January 1, 2018. That’s long enough for them to make other arrangements (perhaps, ahem, buy a different streaming player?). Or maybe they can use the newly added Amazon Silk web browser to load the YouTube site on Fire TV – a hack that we hear should work for the time being at least.

The two companies have been negotiating for some time in an attempt to reach an agreement that will benefit both their customers, so it’s unclear why they’re not able to come to some sort of reasonable compromise here.

After all, the end result is that they’re making both companies’ customers unhappy. Customers who ultimately live in a world where they’re not choosing between Amazon or Google, but may use products and services from both.

As the feud continues, Amazon users won’t be able to watch one of the world’s most popular video services on Amazon hardware. Meanwhile, online shoppers won’t be able to buy some top selling hardware and smart home devices like the Google Home, Chromecast and Nest devices on the biggest e-commerce site.

“We’ve been trying to reach agreement with Amazon to give consumers access to each other’s products and services,” a Google spokesperson told TechCrunch. “But Amazon doesn’t carry Google products like Chromecast and Google Home, doesn’t make Prime Video available for Google Cast users, and last month stopped selling some of Nest’s latest products. Given this lack of reciprocity, we are no longer supporting YouTube on Echo Show and FireTV. We hope we can reach an agreement to resolve these issues soon.”

Echo Show and Fire TV now display a standard web view of YouTube.com and point customers directly to YouTube’s existing website. Google is setting a disappointing precedent by selectively blocking customer access to an open website. We hope to resolve this with Google as soon as possible.