Facebook has caused a 60 percent to 80 percent drop in referral traffic to news outlets in six countries due to a test that removed Page posts from the News Feed and relocated them to a separate, hard-to-find Explore Feed. But now Facebook’s VP of News Feed Adam Mosseri writes that “We currently have no plans to roll this test out further.” But that doesn’t mean Facebook won’t move forward with implementing a similar change more widely if users prefer their News Feed just be posts from friends.

Facebook recently launched its Explore Feed that shows posts from Pages you don’t follow, as well as other content like Events, Groups, Moments and Saved items. It’s only accessible from the More tab for most users, making it relatively hidden. But Pages you do follow still had their best posts appear in your main News Feed.

But over the past week, Facebook tested a different version of the Explore Feed in Sri Lanka, Bolivia, Slovakia, Serbia, Guatemala and Cambodia. It took all non-ad Page posts out of the News Feed and put them in the much less visible Explore Feed. This led to some Pages receiving 4X less engagement than before. A selection of the top Facebook Pages in Slovakia lost two-thirds to three-fourths of their reach — the amount of users who see their posts, according to Facebook-owned analytics tool CrowdTangle, says The Guardian.

As for how long the test will last, Mosseri tweeted, “Likely months as it can take that long for people to adapt, but we’ll be looking to improve the experience in the meantime.”

Those months of Facebook drought could be ruinous for some publishers who’ve grown to rely on the social network for referral traffic, and that have hired staff to produce content funded by the ad views driven by Facebook referrals. Publishers trying to follow the trend of increased video watching on Facebook could also have problems if a News Feed change massively decreases the viewership of videos that are expensive to produce.

The goal of this test is to understand if people prefer to have separate places for personal and public content. We will hear what people say about the experience to understand if it’s an idea worth pursuing any further. . . As with all tests we run, we may learn new things that lead to additional tests in the coming months so we can better understand what works best for people and publishers.

The situation highlights the massive influence Facebook has on the publishing world, the widespread impact its product tests and changes can have and how publishers have left themselves vulnerable by becoming dependent on a platform that has clearly stated that it puts users first. As long as the users are happy, they keep coming, and Facebook keeps advertising. What makes those users happy — be it friends’ status updates, re-shared videos or news directly from publishers — is interchangeable and inconsequential to Facebook as long as it keeps increasing engagement with the app as a whole.

This same situation has played out a half dozen times on Facebook, all to the detriment of third-party developers and publishers. Facebook saw users didn’t like viral game spam, so it turned off game virality and developers like Zynga imploded. Apps like BandPage let musicians stream music from the landing tab of their Facebook Pages, until Facebook banned landing tabs and BandPage lost 90 percent of its traffic in three months. It saw its Open Graph social reader apps were clogging the feed, so it removed most of their visibility and the apps plummeted. The desktop sidebar Ticker showed what friends were doing in third-party apps and was filled with Spotify listening activity, until Facebook muted the channel and eventually all-but-deleted it. 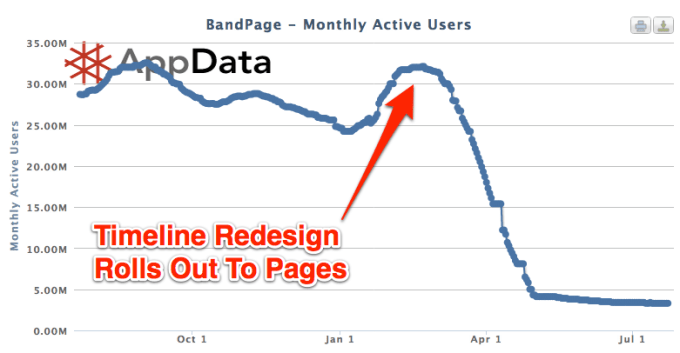 The lesson should be clear despite no one wanting to learn it. Facebook can be an incredible source of referral traffic and growth, but there’s no guarantee it will last. Publishers and developers are not Facebook’s priority. Users are.

Ruthlessly prioritizing the Facebook experience is what’s kept the News Feed at the center of the internet despite changes from desktop to mobile, from text to photos to video. Only by putting users first does Facebook still have users. But everyone else needs to understand that Facebook’s favor is fickle.