Flickr, the once Yahoo-owned photo-sharing site that’s now a part of Verizon*, is getting out of the photo book printing business, and is shutting down the feature that allowed users to turn photos into professional-quality wall art. In an email sent to users this week, Flickr said that it was turning over photo books to publishing service Blurb as of October 16, 2017, but the wall art service was simply being terminated.

An older internet brand, Flickr over the years has suffered from a lack of attention and resources, while other companies began stepping up their efforts in the photo-hosting and photo-sharing space, including Facebook, Google, Apple, and Amazon, among others.

But under Yahoo CEO Marissa Mayer, there was a renewed investment in Flickr, following the acquisition of several companies, including Ghostbird, IQ Engines and LookFlow, aimed at improving Flickr’s software and its image recognition smarts, among other things.

In 2013, Flickr announced the introduction of photo books as a native feature of its platform – you could just hover over a Flickr set to generate your book. Before, Flickr had allowed third-party sites to enable photo book creation using its photos, but this effort was the first time Flickr had created its own in-house tool for the process.

The following year, Flickr expanded on its photo book offering to allow users to turn personal photos into wall art. Shortly after, it opened this up to pro photographers, too, so they could sell their photography as wall art to other Flickr users, making Flickr more competitive with sites like 500px, for example. 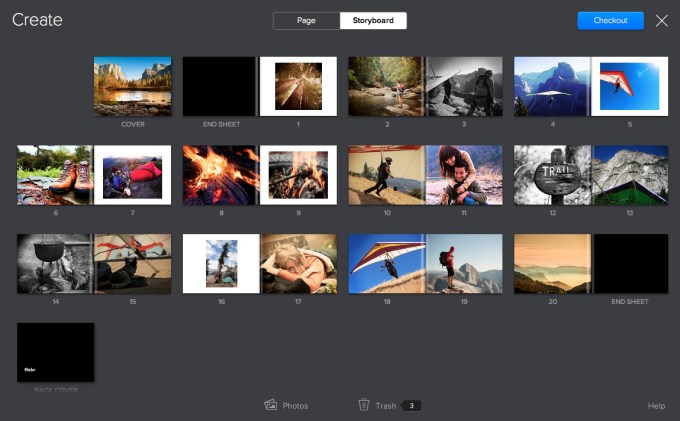 It’s unclear how successful either of these two programs have been, but it’s worth noting that offering photo books today seems to be a baseline feature for any photo-hosting and sharing service today.

For example, Apple offers a suite of print products via Photos and iPhoto for Mac, including photo books, calendars, cards, and prints. Amazon last fall took on Shutterfly with its own photo printing service, and Google upgraded its Photos app with support for photo book creation earlier this year.

However, the fact that there is now so much competition could also have contributed to Flickr’s decision to shut down its print businesses. There are plenty of other places today to order prints and wall art. Plus, Flickr’s own service was a little pricey ($35 for 20 pages, higher than Apple’s books), but without key advantages in terms of customization or ease-of-use to really differentiate it as better than alternative offerings.

The company says it’s offering Flickr Pro members a $35 credit towards their first Blurb order and another $35 towards a second order of $70 or more when they renew. Meanwhile, users who had started a photo book or wall art order on Yahoo but hadn’t yet finished it will have until December 1, 2017 to wrap things up. Order history will also disappear after that date.

In Flickr’s user forums, members don’t seem too upset about the shutdowns, saying that the news is “not surprising” or that they “understand the move.” Others noted photo printing was just not something they do, or not something they turned to Flickr for.