Google today announced an upgrade for its popular Google Photos application, which is now being used by 500 million people every month. The app now has a new social feature called Suggested Sharing, which uses facial recognition to suggest which photos you should send to your friends and family. Another option called Shared Libraries will allow you to automatically share either all your photos or a subset of your photos with specific people – like a best friend or partner – for example.

The company also announced it will offer photo books and will integrated Google Lens into Google Photos.

The Google Photos app will identify who from your Google Contacts is in your photo, and then give you a nudge to share your photos with them from the app.

Google’s Anil Sabharwal showed how this feature would work during an onstage demo at Google’s developer conference, Google I/O. 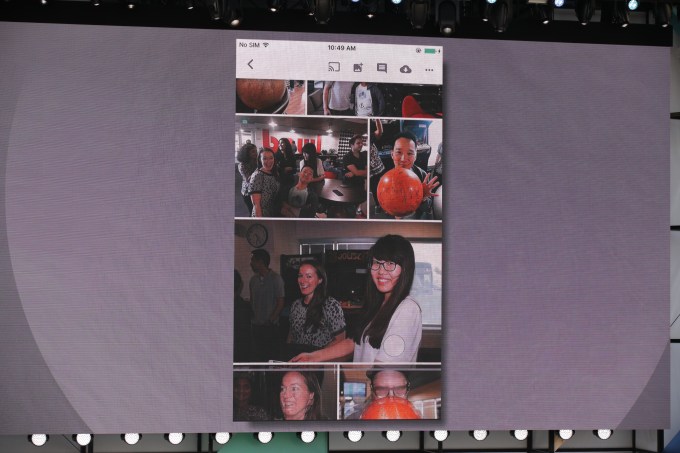 Shortly after you take a photo, a notification would pop up saying something like “5 new photos with Dave, Jason, and Meghan. Share with them?”

You can then respond to this alert to share your photos automatically. For those who don’t have the app, Google Photos will even send an SMS notification. 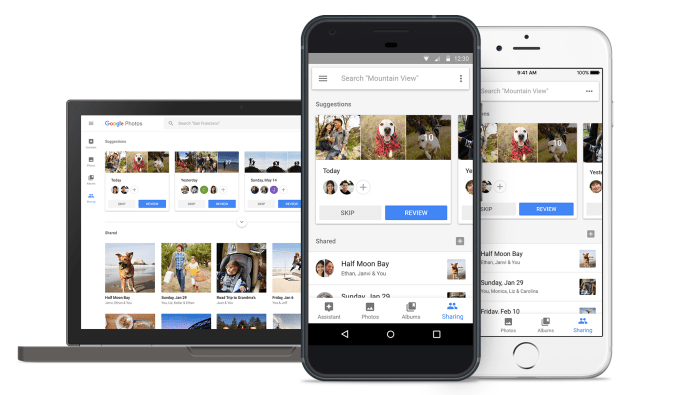 You’ll be able to see all your sharing activities and Google Photos’ sharing suggestions in a new Sharing tab, which will roll out on Android, iOS and web in the coming weeks, the company says. 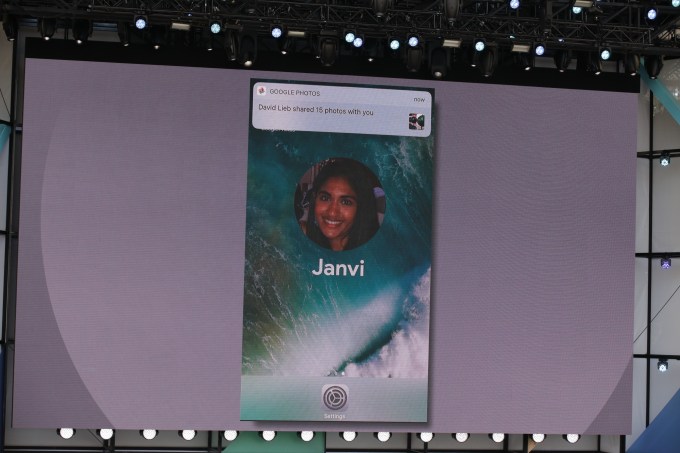 A second feature called Shared Libraries is designed to make it easier to share with the select people in your life who you’re very close with – like a family member, best friend or partner.

In the Google Photos app, you’ll be able to turn on a setting that will automatically share photos with these designated contacts. But you don’t have to share your entire library, says Sabharwal. Instead, you can choose toggle on a feature that lets you only share photos containing a particular individual (or multiple persons). 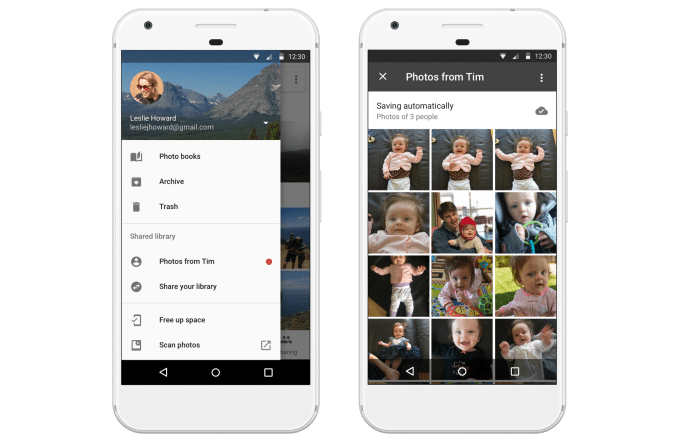 For example, a wife could automatically share all photos of her two children with her partner, where they would be automatically available on his or her smartphone, as well.

The recipient can also choose to automatically save these photos, so they will also show up in search and in the movies, collages and other creations Google Photos makes for you.

Shared Libraries will also roll out on Android, iOS and web in the weeks ahead. 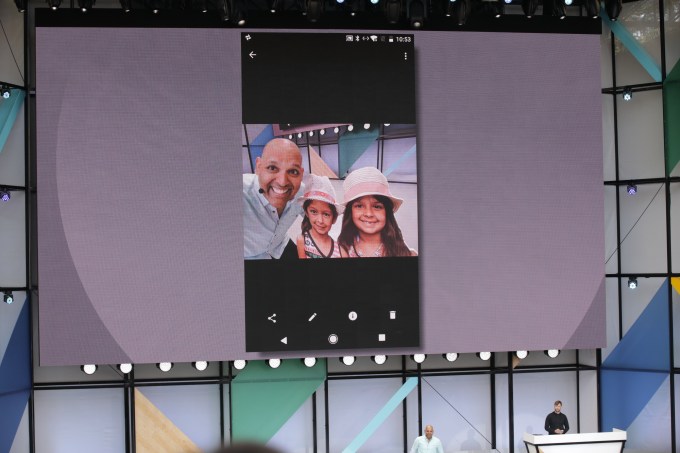 A third feature – which had been previously scooped by Bloomberg – is the launch of photo books.

With the update, Google Photos will be able to identify your best photos and offer them up as physical, printed photo books. It may also suggest you buy a book when it detects an event has taken place – like you’ve just returned from a family vacation, for example.

Additional pages will cost more – $0.35 for each added page on softcover books, and $0.65 on hardcover books.

Photo books will be available on the desktop starting now, and will arrive on iOS and Android next week. 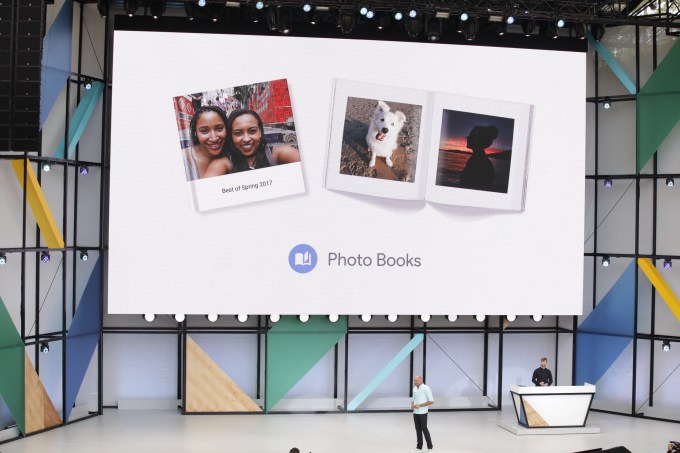 The move into photo books will challenge Apple, Amazon and older photo printing companies, like Shutterfly. Apple users can currently print books from the Photos application on their Mac, starting at $10 for 8×6 inch, 20-page softcover books, and going as high as $50 for a 13×10, 20-page custom hardcover with its own dust jacket. 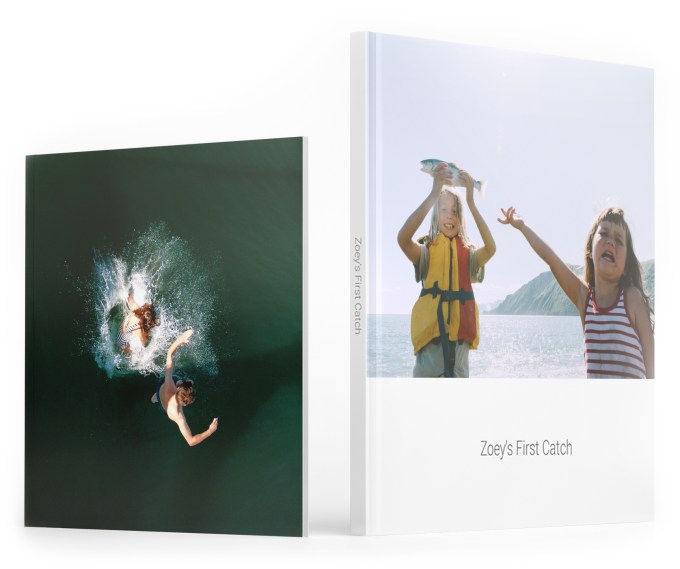 Amazon, too, introduced its own photo printing service last fall, undercutting rivals. Essentially a perk for Prime members, as it requires that photos are stored in Amazon Drive, its photo books start at $20 for its hardcover and layflat books.

Google’s photo books are competitive with both of these options. 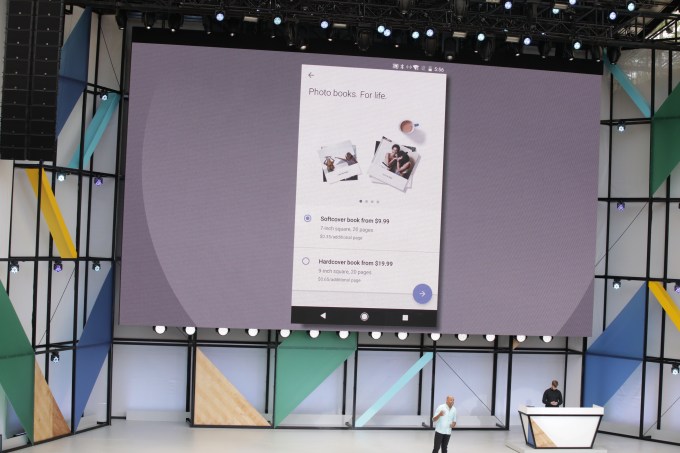 Finally, Google announced that Google Lens — the machine learning system that tells you things about what your camera is seeing — is also coming into Google Photos.

This will allow you to ask questions about pictures you’ve already taken.

For example, if you’re looking at a screenshot you saved of a company’s website and there’s a phone number, you can just tap it to call.