Yesterday, Zuckerberg used the company’s VR app Spaces to tour through an NPR-produced 360 video of Puerto Rico. Zuck’s cartoon avatar directed attention towards various features of Puerto Rico’s destruction while another Facebook executive remarked “it’s crazy to feel like you’re in the middle of it.”

The video induced quite a few cringes as the tech billionaire visited Puerto Rico’s destruction inside virtual reality as a cartoon.

“Do you want to teleport somewhere else?” Zuckerberg’s VR avatar asked as he wrapped up his conversation about Puerto Rico. “Yeah maybe back to California?” another executive answered. 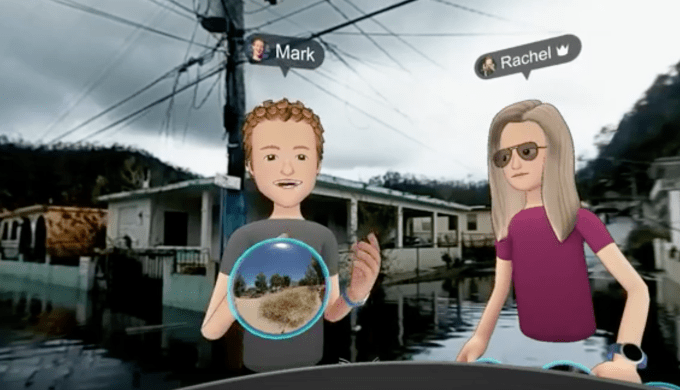 Zuckerberg reacted to some of the backlash in a reply to a Facebook comment on the video.

One of the most powerful features of VR is empathy. My goal here was to show how VR can raise awareness and help us see what’s happening in different parts of the world. I also wanted to share the news of our partnership with the Red Cross to help with the recovery. Reading some of the comments, I realize this wasn’t clear, and I’m sorry to anyone this offended.

To be fair, it really is difficult to represent experiences in VR to third parties and all Zuckerberg was seeing was the harrowing video from NPR, not necessarily what it looked like as his cartoonish avatar grabbed the camera to peruse the damage. That being said, the tone-deafness of the video was pretty pronounced and even though the content of his video pointed to all of the positive work Facebook was doing in Puerto Rico, seeing a couple of cartoons chatting about it in VR have made the executives appear pretty out of touch.

“When you’re in VR yourself, the surroundings feel quite real. But that sense of empathy doesn’t extend well to people watching you as a virtual character on a 2D screen. That’s something we’ll need to work on over time,” Zuckerberg said in another comment he left.

Facebook is generally pretty careful to isolate its CEO from opportunities for bad press, Zuckerberg has an extensive team helping him maintain his manicured public image on the social media site. With tools like Facebook Live that demand less scripted moments, this level of media-training can stutter, especially when you don’t have the advantage of seeing an outside view of what exactly you look like while it’s all going down.

Regardless, someone should’ve known better.

Facebook specifically chose a fun, vibrant cartoon-like mood for their VR Spaces app so that users wouldn’t feel intimidated by the control scheme. That works fine for watching a movie preview or drawing something in VR but Facebook should probably save conversations of it being easier to “move bits than atoms” for segments that don’t feel an awful lot like disaster tourism.