“We use artificial intelligence to build what we call ‘population maps’ so you can look at satellite imagery of an area and get a sense of where it is that people actually live and the density of different places and where’s there’s infrastructure going to in those places,” Zuckerberg said. “That’s going to help the Red Cross figure out where people are who need help.”

What was perhaps most peculiar about the announcement was that it was given by a cartoonish Mark Zuckerberg avatar speaking from the company’s Spaces virtual reality app that runs on the Oculus Rift headset. 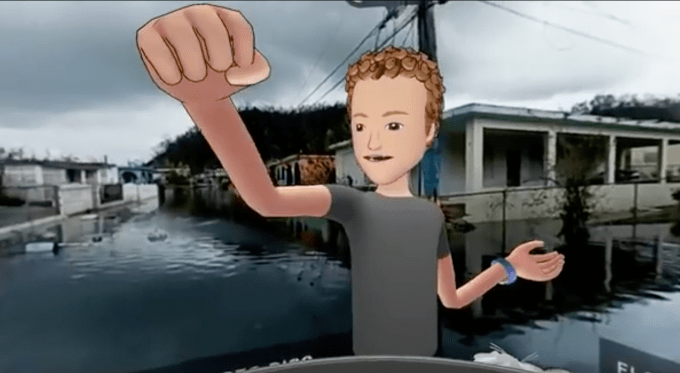 Oculus is having its developer conference this week so it’s not entirely out of left field, but seeing a cartoon avatar in the middle of an NPR-produced 360 video highlighting the situation in Puerto Rico while very real people walk around surveying the devastation of their homes perhaps wasn’t the most appropriate choice.

Nevertheless, Zuckerberg referenced the company’s efforts in activating functionality like Safety Check so people could alert FB friends that they were safe, while also utilizing Community Help feature to help organize aid efforts in Puerto Rico. Importantly, Zuck also highlighted that Facebook donated $1.5 million to relief efforts and sent a number of employees down to the island to help ensure that networks were up so that relief efforts could be coordinated more easily.