After trekking out to the middle of Central Park to see Snapchat’s newest AR feature, I can solidly say that the best part of the experience was getting to spend some time outside during a beautiful fall day. Yeah, it was that lame.

As background, yesterday Snapchat posted a mysterious countdown timer on a domain named art.snapchat.com that was reminiscent of the countdown timers announcing the next location of a Spectacle-selling Snapbot. But the countdown timer relied on client-side JS, meaning some smart TC readers were able to spoof the timing and see what was hiding behind the timer.

The surprise was a new program designed to place giant AR art sculptures in hotspots around the world that you’d only be able to view via Snapchat. The first featured artist was Jeff Koons, known for his giant faux balloon sculptures.

Anyways, today at 3pm ET when the countdown time ended I was camped out in Central Park, which was one of the locations shown when the website went down. At 3pm a forward-facing world lens appeared with the small icon being a yellow Jeff Koons balloon sculpture. When activated, a pin appeared in the distance indicating I was 115 meters away from the sculpture.

This updated in real time and indicated which direction to walk and how far away I was as I walked closer. Snapchat’s website now also shows you the exact coordinates of each AR sculpture. 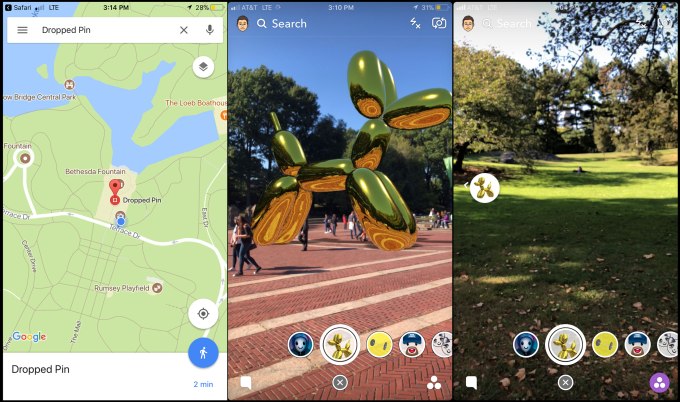 To be honest, this scavenge hunt-style search was the most fun part of the whole experience. The augmented reality demo itself was really mediocre, and much less impressive than any decently made ARKit game.

I finally found the giant yellow AR balloon animal in the middle of an open concourse in Central Park. But it wasn’t as perfect as the image above — it took me about five tries of closing and opening the app to get it to look as good as it does in the photo above. The first few times the AR sculpture was changing locations, floating randomly in the sky, and overlaying itself on concrete pillars like shown below.

Rendering the AR art must have been processor intense — I have the newest iPhone 8 Plus and the entire app was still running slowly. At one point my phone crashed and spent about 30 seconds with a black screen and spinning loading indicator, though I was also frequently taking screenshots and using Apple’s screen recording feature, which, to be fair, may have taken up some processing power. Using Snapchat for about 10 minutes to view the sculpture also drained about 10 percent of my battery. 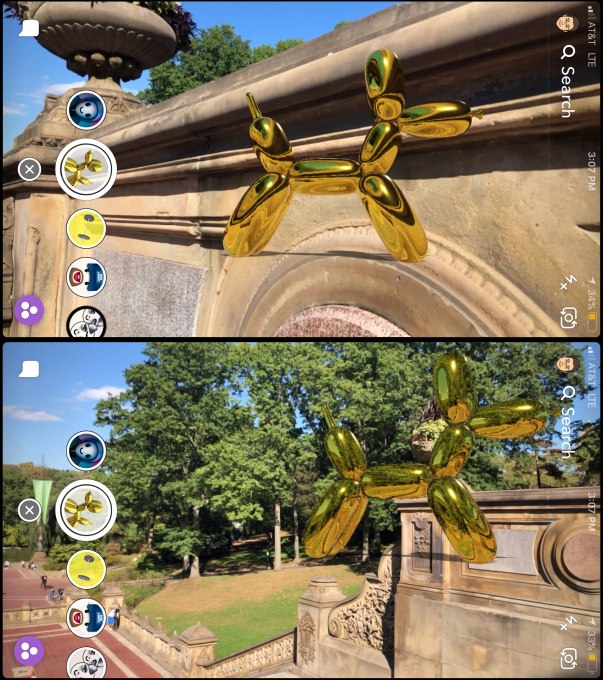 For what it’s worth, I seemed to be the only one there that knew about the new AR feature, so it definitely wasn’t reminiscent of Snapchat’s promotional video where dozens of people were crowded around an open space.

That being said, the idea is cool. Once I got it displayed correctly it was fun to walk around the sculpture and see the world reflected around me — it almost felt like I was at The Bean in Chicago. But it’s still probably not the best demo of augmented reality — I know my non-technical friends would be much more impressed with an ARKit demo than seeing this.

If Snapchat can iron out the tech issues, it’s neat to put an AR sculpture for people to come see in real life. And once I got the sculpture to display correctly I could walk up to it and see it from all angles, and even my surroundings in its reflection — which definitely isn’t an easy technological feat. Snapchat has opened submissions to other artists, so expect to see a sculpture in a major city near you soon.