The vast quantities of money raised by startups and the stratospheric share prices of publicly-traded tech giants perhaps speak for themselves, but a survey out today from LinkedIn has provided a few more data points to spell it out for us: the IT and software industry is where it’s at when it comes to making the highest salaries, with hardware and networking a very close second, both with median compensation of over $100,000 annually.

The survey is a byproduct of research that LinkedIn, now a part of Microsoft, has been collecting since November last year, when it launched a salary tracker for people to use to get an idea of what other people in their field are earning, based on geography, years of experience and other parameters. LinkedIn said that it used anonymised data from some 2 million members who entered their details into the system to compile this report, which it then ran against other data to throw out numbers that it deemed to be inaccurate.

The publication — part of LinkedIn’s strategy to produce more content for people looking to improve their career prospects — makes for some interesting reading for those of us curious about how salaries compare across different industries, levels of experience, gender and geographies. Here are some of the more notable data points:

Tech may be the general category in the lead, but when it comes to individual jobs, medicine stays at the top for highest salaries for specific jobs. Medical roles take up the first six of the top-10 jobs, with orthopaedic surgeons making the highest salaries at $450,000 annually, and cardiologists in the number-two position with $382,000 (including bonuses). Finance, sales, managing director, and tax specialists round out the list, but these jobs are not specified by industry.

It what may also not be much of a surprise, finance has the highest-paying jobs for those looking for the most money at an entry-level position. User-experience designers and product engineers are the two highest-paying entry-level jobs in tech, with respective salaries of $72,000 and $68,000.

Taking all the jobs in a given industry, tech comes out on top. In fact, tech-related industries are the only ones that break the $100,000 mark when it comes to median compensation, with manufacturing coming in third with a median annual compensation of $85,000. Media and communications is at the lower end of the scale, and education — frustratingly — is at the very bottom of the list.

Along with tech earning the most, computer science is the most lucrative field of study. The average comp sci major earns $92,300, according to the survey. Other related fields like industrial engineering and business are also high up on the list. Interestingly, visual art is a close second — perhaps because many starving artists are not that likely to fill out LinkedIn surveys. 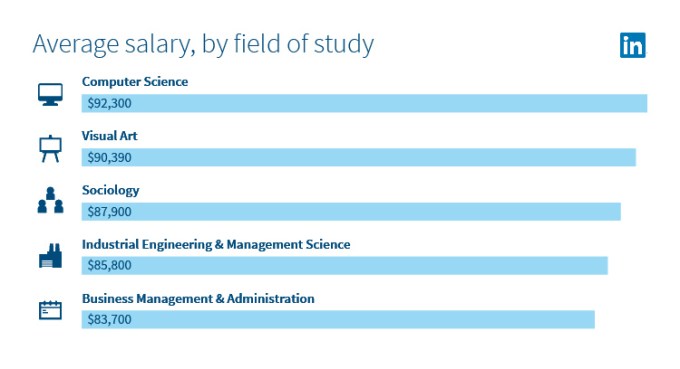 The gender gap in tech is one of the worst across the working world. For those who lament the lack of diversity in tech, LinkedIn’s survey provides for some sobering reading. Construction, manufacturing, and transportation/logistics have the lowest ratio of female employees — respectively at 4.7, 3.2 and 2.6 males for every female — but close behind is tech. Software and IT services have 2.4 men for every woman, and hardware and networking have 2.3 men. Design has near parity, and the lowest-paying jobs have more women than men in them. (Sense a pattern here?) 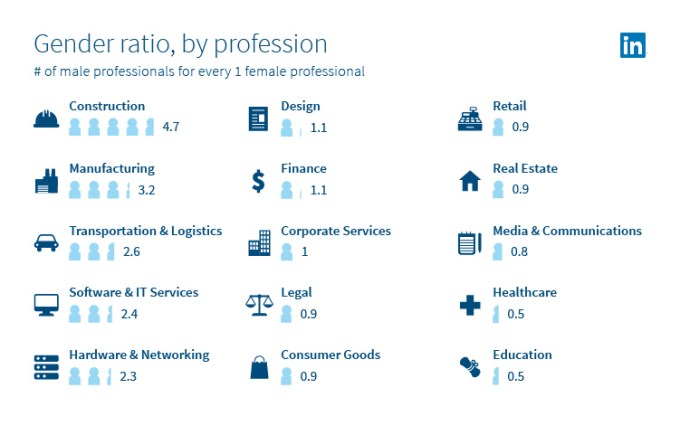 Just as illuminating is what LinkedIn doesn’t include in this survey: the company doesn’t give any figures that point to what kind of gap there is between white employees and people of color. I’m asking why and will update this if and when I find out.

Geographically, San Francisco has the highest salaries. Just as the Bay Area is one of the most expensive places to live in the world, salaries reflect this, too. As with tech, which is the biggest industry in the region, it’s the only one in LinkedIn’s survey that breaks six figures.