For Houston area residents still being pounded by record rains so intense that the National Weather Service added a new color to its precipitation map, Harvey is a marathon — a vast sprawl of a natural disaster still so present that its impact can’t yet be accurately assessed. In response, locals across the region have come together, forming an ad hoc rescue armada, fielding distress calls over Twitter and throwing their doors open to the less fortunate.

With all eyes on the disaster still unfolding in Texas, the tech industry too is coming together — hearteningly, as it often does — to alleviate the suffering of those affected. Here’s what some of tech’s major players (and a few Texas-based companies) are doing to help.

Apple has added a donation button directly into iTunes and the iOS App Store, with proceeds going toward the American Red Cross. The button allows users to donate easily in increments from $5 to $200 using the payment information already linked to their account.

Prayers for Texas and all those affected by #HurricaneHarvey. Join us in the relief effort by donating: https://t.co/QLBMFOjaDG

With a nod to its Texan Googlers, the company pledged to match $1 million in donations toward relief efforts in partnership with the American Red Cross. At the time of writing, the company had raised $140,917 toward its goal.

The company has also added Texas and Houston-specific alerts across its product suite with SOS Alerts that detail emergency phone numbers, relief fundraisers, maps and other resources. 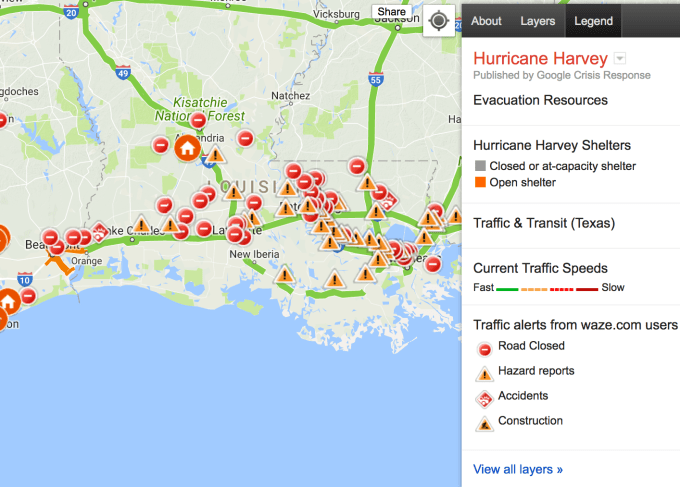 Facebook is running a matching campaign on its own platform, pledging to contribute up to $1 million to benefit the Center for Disaster Philanthropy, an organization that optimizes donations to benefit “the full arc of the disaster cycle-preparedness, response and long-term recovery.”

Facebook also provided a Harvey-specific Safety Check so users can check in on friends and family who might be impacted by the disaster.

Lyft has integrated donations to the American Red Cross in its Round up & Donate feature, which encourages riders to round their fare up and send the difference to a good cause. Lyft will also donate $100,000 to the Hurricane Harvey Relief Fund and has temporarily paused operations in cities directly affected by Harvey to protect both drivers and passengers.

Amazon too will match contributions up to $1 million with proceeds going to the American Red Cross. The company has also added a Wish List of things that those affected by Harvey might need so that users can send specific items to the Red Cross in lieu of a cash donation. 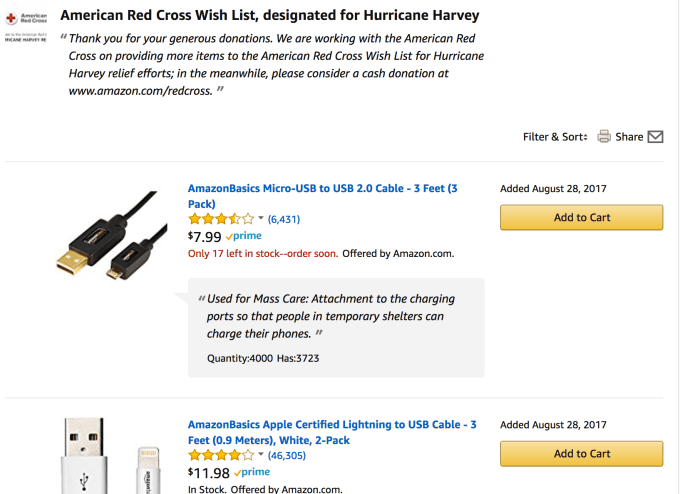 A small coalition of Austin-based companies, including uShip, Box, Aceable, the Chive, Everfest, Invodo and Boundless Network are organizing a donation drive for physical goods to assist disaster relief. Donations of non-perishable food, bottled water, batteries and other needed items can be dropped off at or mailed to uShip HQ, 205 E. Riverside Drive Austin TX 78704, by Friday. Proceeds will go to the Houston Food Bank or the American Red Cross.

Microsoft has announced an initial $100,000 donation to the Red Cross, suggesting that it intends to donate further in the future.

In response to the housing crisis unfolding in Texas, Airbnb is opening its platform to those displaced by hurricane and flood damage, waiving fees and pairing them with hosts offering free lodging for those affected. 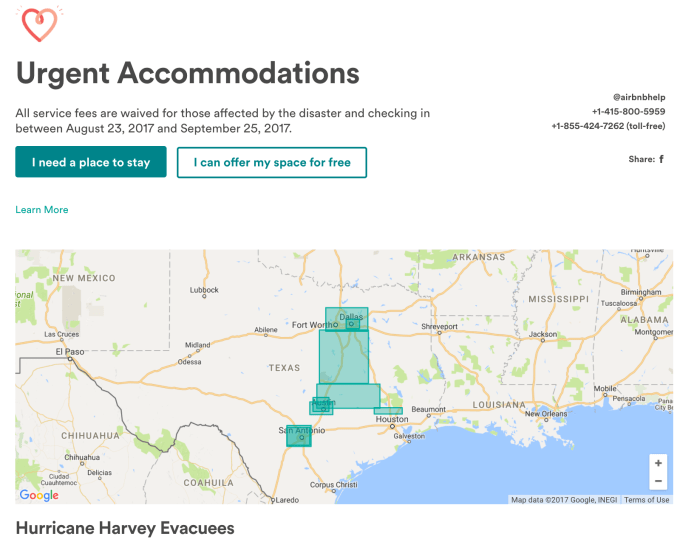 Uber is running a program offering free rides to and from established Harvey shelters in Houston, Austin, Dallas and other cities in Texas. According to Uber, “No action is required to receive a free ride to or from these locations — the full discount will automatically be applied and reflected in the app when you request uberX.” The full list of shelters where free Uber rides are operational is listed on its blog post.

Austin We’ll be updating this list of Harvey relief efforts by tech companies as more are announced.