As Tropical Storm Harvey continues to inundate the Texas Gulf Coast, Facebook users have one more reason to donate to relief efforts. Facebook announced Tuesday that it would match the Harvey disaster relief funds raised by its users up to $1 million.

To contribute match-eligible funds to Harvey recovery efforts on the platform, Facebook users can follow the message on top of their News Feed urging them to donate or they can donate directly through the center for Disaster Philanthropy’s Facebook page. 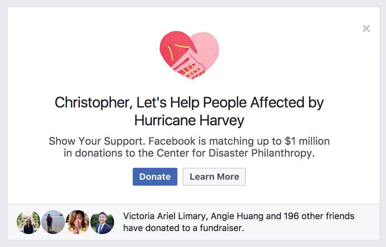 Over the years, Facebook has increasingly positioned itself as a tool for both fundraising and for connecting friends and loved ones in times of crisis. In June, Facebook announced that its Safety Check feature — a tool for users to mark themselves as “safe” during emergencies and natural disasters — would integrate support for crisis-specific fundraising. While Safety Check is not without criticism, Facebook’s ability to harness its uncanny knack for social engagement for disaster relief fundraising is one of the more clear net good results of the world’s largest social network.