Facebook today is expanding on the popularity of its two-year old “On This Day” sharing prompt, with the addition of new features that let users revisit their memories, as well as celebrate milestones related to their friendships on the social network. While “On This Day” provides a look back in time, starting with memories from the same day last year, two new options will instead focus on your more recent memories.

The company will now begin to bundle your past posts into monthly or seasonal sharing prompts. For example, you might see recap stories for things like your summer memories or your January memories.

Like “On This Day,” these new sharing prompts are private to you, unless you choose to post them to your Facebook profile. They’ll also appear in your News Feed, where you’ll see the collection of photos Facebook has picked for you along with the “Share” button below.

The recap feature arrives at a time when Facebook is struggling with consumer adoption of its Snapchat Stories clone, which unlike Instagram Stories, has not taken off. Facebook even began showing grayed-out images of friends’ photos earlier this year in Stories, in an effort to increase usage.

Facebook believes that Stories is simply a new sharing format that every network will eventually offer. However, many people think of Facebook as a more permanent record of life events, thanks to its ability surface old memories, search or scroll back through timelines to see historic personal moments, like the date you got married, started a new job, moved to a new home, and so on.

That’s why a recap feature makes more sense for Facebook, as opposed to the recency associated with Stories. It’s a better fit for a network that’s encouraged people from day one to document what matters in their lives, not what’s disposable. 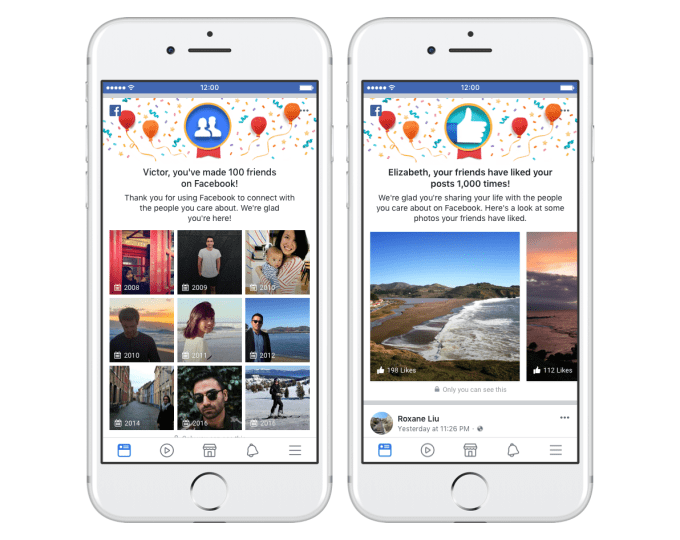 In addition to this, Facebook is also today launching new friendship milestones. While the social network already allows users to celebrate their friendship anniversaries on Facebook with playful posts and videos, these new moments will focus on notable achievements – like when the number of friends you have hits a nice, round number like 100, or when your posts have been liked 1,000 times, for instance.

These messages are shown only to you, and are oddly not shareable at launch. However, Facebook says that will change in the future.

Meanwhile, “On this Day” is now finally available to all on Facebook, the company also says. Facebook has improved its filtering process to keep those memories associated with negative events or feelings from popping up in its suggestions, it notes. 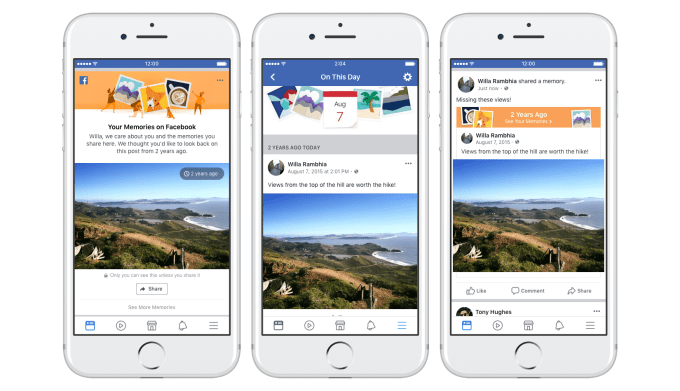 Features like these are minor updates in the grand scheme of things, but they have a larger goal: to keep users posting to Facebook.

Last year, there were reports detailing how Facebook sharing – specifically “organic sharing,” meaning personal updates –  was in decline. Since then, Facebook has made a number of changes to make sharing and participating more engaging, as with the rollout of colored backgrounds for status updates, support for GIFs in comments, among other things.

Facebook says the new features are rolling out now, and will be expanded to include more prompts in the months ahead.