Netflix’s subscriber count is soaring and the company is investing billions into original content, but according to a new report published by Marketing Charts today, live TV is still the first place around half of TV viewers go first when they want to watch a show. However, for roughly one in five viewers, or 19 percent, their “default” source for TV programming is now Netflix. That figure is up from 15 percent last year, indicating that Netflix’s drive to fill its library with can’t-miss content may be working.

The survey data comes from Hub Entertainment Research, and counts a U.S. TV viewer as someone who watches at least 5 hours per week, and has broadband at home. 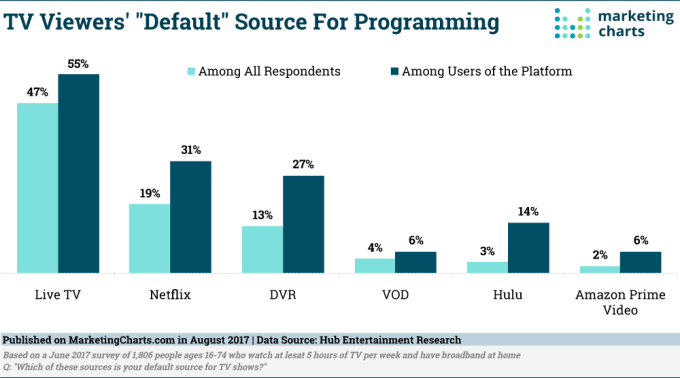 While the data shows that live TV is still far ahead of any streaming service as people’s default choice for TV programming, live TV’s lead – not too surprisingly – narrows when consumers also have a Netflix account. In that case, nearly a third (31%) will go to Netflix first when they want to watch television, up from 27% last year.

Meanwhile, one in four will turn to some sort of subscription video-on-demand service as their default source for television.

What’s also interesting about this study is how remarkably different these figures are when you look at the youngest TV viewers. Unfortunately, the report didn’t measure the same exact age groups year-over-year, so a direct comparison isn’t possible. But a general trend can be spotted. Last year, the firm found that 27 percent of Netflix users ages 18 to 34 would turn to the streaming service first. This year, it said that 50 percent of those 16 to 24 did the same.

In both cases, that’s significantly higher than the older age groups. And it explains why traditional pay TV providers are now scrambling to figure out how to sell live TV over the internet, through services like Sling TV (Dish), DirecTV Now (AT&T), and others.

It seems the younger you are, the less likely you are to turn to live TV when you could stream instead.

Another notable finding is that Netflix users are more likely to claim it as their default, compared with users on Hulu or Amazon Prime Video. That correlates somewhat with a prior comScore study which said that U.S. over-the-top households watch more Netflix than any other subscription video offering.

This isn’t the first recent report to show live TV’s continued traction, despite all the growth in streaming. A March 2017 study, reported by eMarketer, found that live TV is still the most popular way to watch TV in the U.S., with 68 percent of all internet users doing just that. 58 percent watch Netflix, and 50 percent watch YouTube, it also said.

It seems the old traditional TV die-hards are hanging on these days – something that may be tied to, at least in part, the difficulty with watching live sports without a cable or satellite subscription. That’s been changing somewhat, thanks to Sling TV and more recently fuboTV, but new sports streaming services from ESPN and CBS could have a further impact. In addition, many are finding ditching cable isn’t necessarily saving them money once they add back in streaming.