Beyond the fact that it’s Disney, a brand with innumerable assets to be leveraged and a studio production arm ready to pump out exclusive content, Disney’s forthcoming streaming service may be able to carve out a niche for itself because choosing a subscription service is not a zero-sum game. A number of recent studies have already indicated that today’s consumers are willing to pay for multiple services in this market. But that’s especially true for millennials, according to new research out today from Morning Consult.

According to the latest survey the firm conducted, 36 percent of U.S. users aged 18 to 29 years old said they would likely subscribe to the new Disney streaming service when it arrives in 2019. That’s more than the 23 percent for the market as a whole.

The reason? Younger users are already hooked on streaming, and willing to use — and pay for — multiple apps, the report says. In fact, 48 percent of that age group is currently subscribing to multiple services, while only 28 percent subscribe to just one.

Today, Netflix and Amazon are the top two services that attract this key demographic. Two-thirds of millennials (67 percent) pay for Netflix, while Amazon Prime comes in second place with 28 percent subscribing.

Among the market as a whole, Netflix (52 percent) and Amazon (26 percent) are also number one and two, while newcomer YouTube TV has now jumped into the third position (15 percent).

For millennials, in particular, YouTube TV and Hulu are tied for third, both at 23 percent. 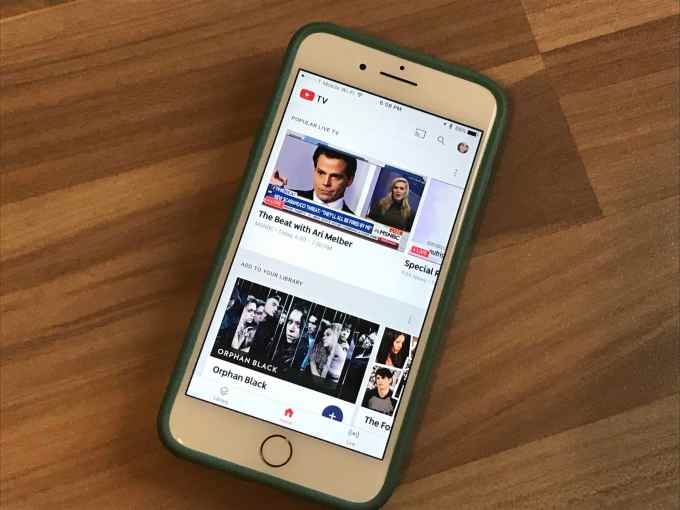 Millennials’ claim they’d pay for Disney’s service fits with a larger trend that sees this group willing to adopt more than one service for media consumption.

As Nielsen explained it, younger users aren’t reducing their media consumption across one medium, so it can thrive in another. Instead, they increase their consumption thanks to all the options on hand.

While Nielsen’s latest was focused on music streaming among millennials, the trend to adopt more than one streaming service isn’t limited to the younger generation.

A study released last fall from research firm GfK, reported by Reuters, found that 16 percent of U.S. video viewers had signed up for more than one streaming service — a figure that was up from 10 percent just three years prior. Meanwhile, a separate report (PDF) released in April from 451 Research found a similar trend, stating that 19 percent of North American video subscribers pay for three or more services — up four points, year-over-year.

It seems that when consumers ditch traditional TV in favor of streaming, they’re interested in creating their own bundles of video services, not just choosing one in a winner-takes-all approach. 451 Research’s report had also found that Netflix and Amazon Video were the top two services, with consumers then building out their own mix with others like Hulu, HBO Now and even marketplaces like iTunes rounding things out. 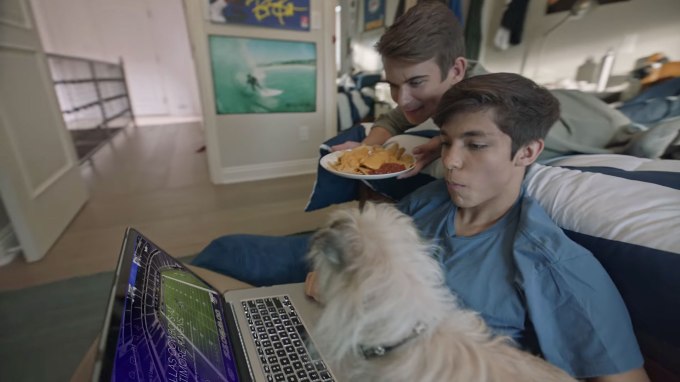 In addition to an increased willingness to pay for Disney’s service, the new Morning Consult study found that the new service would be seen as additive to users’ existing bundles. Of those millennials who said they would subscribe, more than half — 58 percent — said it would be in addition to other streaming options. Only 34 percent said it would replace another service.

But that doesn’t necessarily mean it’s smooth sailing for Disney as it enters the market.

Even this media-hungry demographic is starting to feel overwhelmed by the proliferation of streaming services out there. Indeed, 57 percent said they felt there were “too many” streaming services, and 73 percent expressed a desire for a service that had all the shows they wanted to see.

However, 55 percent said they would subscribe to a service to watch a particular show — an indication that Netflix is on the right track with its strategy to invest $7 billion in content in 2018 in order to make it a must-have subscription.

Disney will similarly need to find a way to attract this key, younger crowd, as opposed to just the parents of small children, who want to use Disney movies as their digital babysitter at times.

Another huge challenge facing Disney is getting the pricing right for its streaming service.

The company hasn’t yet settled on what the service should cost. It’s doesn’t know the full mix of content, either. Disney said it will include Disney and Pixar films, like Frozen 2 and Toy Story 4, plus original movies, TV shows, short-form content and other Disney exclusives. But it’s not even sure if it will integrate Marvel and Star Wars into this service, or save them for their own. 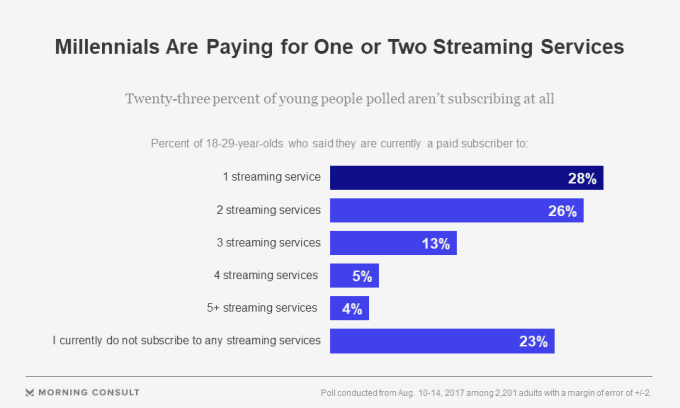 And cost is a big concern for millennials, the new study found. Forty-two percent think they’re already paying too much for streaming, even though most (54 percent) only pay for one or two services; 26 percent don’t pay at all.

Morning Consult’s survey was conducted from August 10 through 14, among a representative sample of 2,201 U.S. adults. However, like any survey, the numbers don’t necessarily indicate what will happen, as what people say they’ll do versus what they actually do is often very different.