Millennials’ reputation for a lack of brand loyalty extends to digital services, according to a new report out from Nielsen this morning. The measurement firm’s latest study looks into how the generation consisting of 18- to 34-year-olds uses communication apps and streaming music services, among other things. The report found that this demographic is highly engaged with digital services throughout the day, but they don’t tend to choose only one service over another in any segment. Instead, they often use many.

For example, nearly 60 percent of millennials use two or more apps for streaming music, Nielsen found. That’s far higher than older users, 35 and up, where only 39 percent do the same. This indicates a lack of loyalty to a single brand, and a desire to consume more media in general, compared with their older counterparts.

Millennials are also 18 percent more likely to use these multiple apps on a monthly basis, versus older users. 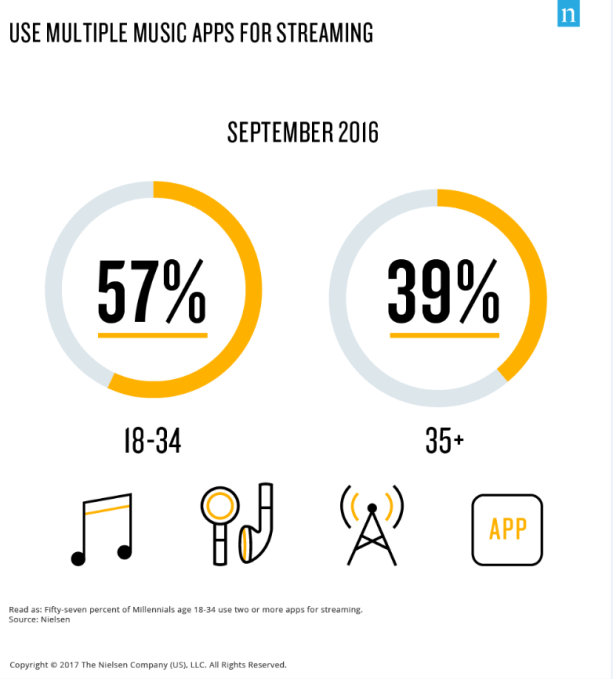 How this group consumes music is different, as well. These younger users are 21 percent more likely to choose songs to play on demand, instead of streaming music without making changes. That speaks to why apps like Spotify have seen greater adoption in recent years, forcing older music streaming services like Pandora to shift into on-demand listening in order to catch up with where the market is headed.

Consumers aged 35 and older, meanwhile, are more likely to remain loyal to a single app or streaming service, compared with the 18- to 34-year-olds, the study found.

Younger users are a driving force behind the increased popularity of podcasts, too, with 37 percent listening at least once per week, and 13 percent listening daily. They’re also nearly three times more likely to listen to podcasts daily, compared with others. 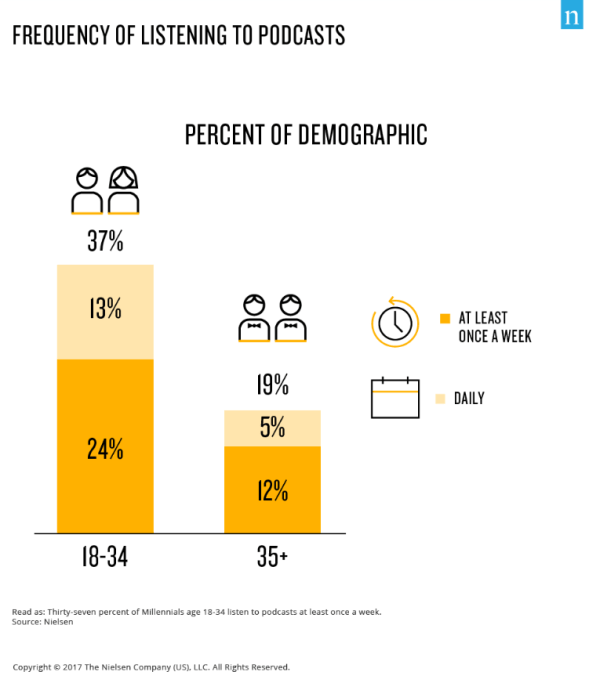 What’s interesting is that, despite the rise of alternative means of listening to music, millennials continue listening to traditional radio. The 18- to 24-year-olds average 10 hours, 14 minutes per week, in fact, or about an hour less than 25- to 34-year-olds.

Overall, 93 percent of the demographic listens to traditional AM/FM radio weekly — a metric that increased from 92 percent in the fourth quarter of 2016. That may seem odd, given how many choices consumers have for music listening today, but Nielsen characterizes this as representative of these group’s desire to increase their consumption of media, as opposed to reducing it across one medium in order to feed a need with another.

A similar multi-app usage trend can be found when it comes to digital communication services, like messaging apps. The large majority of younger users — 70 percent — use two or more apps for messaging, compared with just 42 percent of those 35 and older who do the same. Again, this is indicative of how the group makes room in their lives for technology, where new options don’t necessarily cannibalize old ones, says Nielsen.

Millennials also are more likely to use those apps for things beyond text-based communications, like photo sharing and sending videos, and they’re 8 percent more likely to participate in group chats, compared with those 35 and older.

This is one of the larger differences between younger users and older users, Nielsen points out. The 35-plus crowd prefers plain text messages to communicate, while their younger counterparts have since moved on.

The new report leverages several Nielsen data sets, including measurement panels and surveys, as well as data from Nielsen’s Music 360 Report and its last two Total Audience reports, among others.

Correction: Nielsen typoed in its report when it said 95 percent listen to AM/FM radio; the correct number is 93. We’ve updated our post to reflect this.