VIDA, an e-commerce startup that allows artists to upload their designs to be printed on real-world materials – like fabric, leather, metal and more – which are then sold as unique products, has grown its community of artists to over 100,000 members since its launch a few years ago. The company is now participating in startup accelerator Y Combinator, following its recent collaborations with big names, including Cher, Steve Madden, Warner Bros. and others.

The idea for VIDA comes from founder Umaimah Mendhro, originally from Pakistan, a Harvard Business School grad who has worked in the past at Microsoft and San Francisco-based market accelerator West.

Mendhro had once wanted to be an artist, having taught herself to cut, sketch, sew, stitch, screen print, paint, and more. But she was worried that she couldn’t make a living by way of art alone, which eventually led her to take another path.

With VIDA, Mendhro merges her interests in art and technology by offering a platform where artists can submit their designs, which then become clothing through VIDA’s use of direct-to-fabric digital printing and, more recently, other methods to expand printing to harder materials.

With the digital printing technique, the process of transferring a design to fabric is quicker than traditional methods. This allows VIDA to print items on demand at scale, instead of holding inventory. It’s also now using 3D printing to design the molds for its jewelry collections, and plans to soon move into other areas, like 3D knitting and laser cutting.

Once printed, VIDA creates a branded page for its artists which they can promote however they see fit. The artists recoup 10 percent of the net sales of all their products sold on VIDA, as VIDA handles everything else associated with the manufacturing and sale of those items beyond the design.

When it first launched, VIDA had only a couple of types of products available – silk tops and a few styles of scarves.

Today, the company has branched out to numerous areas – tops, bottoms, wraps, bags, scarves, items for the home like pillows and tapestries, pocket squares, bags, jewelry, and more. It has also grown its community to over 100,000 artists and creatives from over 150 countries worldwide. The site hosts over 2 million individual SKUs, and is adding around 5,000 more daily.

VIDA isn’t sharing customer numbers or sales figures, but it worked with Cher this year, in a collaboration with HSN. It also worked with Warner Bros. on a collection of Wonder Woman-inspired items, also for HSN.

While VIDA’s larger vision is about making a platform where any idea can become a product, Mendhro says it also appeals to a new kind of consumer.

“We’re rejecting the standardized, mass-produced goods that have been dominating in the retail industry. We want something that’s unique, that tells a story, that has a part of us in there, and something that feels authentic and genuine,” she says. 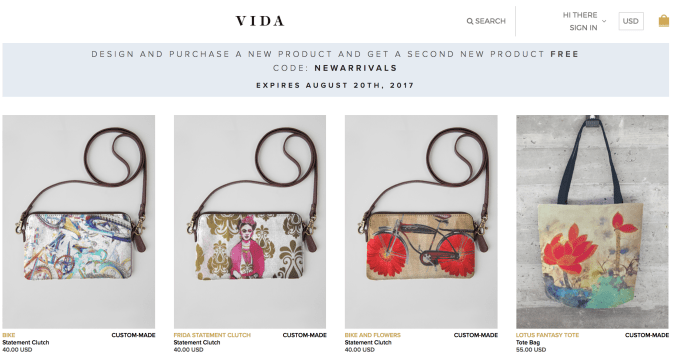 Despite the custom-made nature of the products, many are surprisingly affordable. For example, the custom bags are in the $40 to $50 range – lower than a new Nine West purse or other mass market brand.

The company also appeals to the socially conscious shopper, as it gives back to those manufacturing its goods in factories through initiatives like its literacy programs and women’s empowerment programs in Pakistan, India and Turkey.

The team of just over a dozen is based in San Francisco, and plans to raise additional funds following Y Combinator’s Demo Day to expand beyond fabrics and further scale the business.

The startup is backed by $5.5 million in funding from Google Ventures, Azure Capital, and Slow Ventures. This is a continuation of the $1.3 million seed round TechCrunch previously reported in 2014, when VIDA was in an earlier stage.