An e-commerce company called VIDA, backed by Google Ventures, Universal Music Group and others, is today launching today its site that connects shoppers with “socially-responsible” apparel and accessories from artisans and designers around the world. The company is also disclosing its $1.3 million seed round investment, which additionally includes The Valley Fund, Nanon, Don Mattrick’s Beehive Holdings, Dave Morin’s Slow Ventures, and Jesse Draper.

According to company co-founder Umaimah Mendhro, formerly of West and Microsoft where she’s helped build and launch technology products, she had always wanted to be an artist when she grew up.

“I am from a very small town in Pakistan and was home-schooled much of my life because we didn’t have proper schools around. I taught myself how to cut, sketch, sew, stitch, block print, screen print, oil paint, and more,” she explains. “Yet I couldn’t get myself to pursue art as a profession because I feared I wouldn’t be able to make a living with it,” Mendhro says. “With a love for fashion and design, I was also acutely aware of the hundreds of millions of people employed in textile and garment production, who could never get out of a cycle of poverty.”

Mendhro has some experience with social enterprises as well, she notes, having previously launched one that operates in Pakistan, Afghanistan, India, and Rwanda, focused on bringing communities together through education and empowerment.

With VIDA, the idea is to use technology to provide a way for designers, artists and other creatives from around the world to make a viable living through their work. In VIDA’s case, technology is actually what makes the whole operation possible – from the high-res cameras on mobile phones to the new printing technology called “Direct to Fabric Digital Printing” which VIDA uses.

“Traditional fabric printing requires months of set up time and minimum order of at least a few thousand years. With Digital Fabric Printing, we can print unique designs on fabric at scale really quickly,” says Mendhro. For instance, a designer, Maria Virginia, takes four days to complete a watercolored piece. VIDA then turns that art into a scanned digital format and prints it on fabric in less than 45 seconds, with no set up time or minimum order requirement. In other words, it’s taking the original art – whether photographs, calligraphy, or charcoal sketches, etc. – and turning it into digital art.

At launch, VIDA has over 75 products in two styles of 100% natural silk tops and three styles of scarves, including a micro-modal scarf and a cashmere blend scarf. Prices on the site range from $40 to $95 today, making the products affordable for its target demographic – urban, design-conscious women shoppers who are also mindful of their impact on the world. 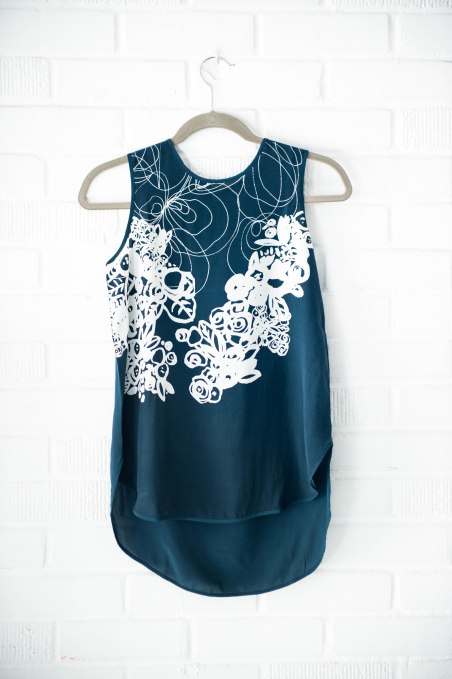 VIDA’s designers include painters, photographers, graphic designers, sculptors, 3D artists, architects, and textile and print designers from around the world, and include Elle Magazine’s ‘Up and Coming Fashion Designer from Sweden, Emma Lundgren,’ Vogue.com’s top 10 fashion grads to watch, Cigdem Keskin from Turkey, and Tokyo based ‘Top Hat Designer of the Year,’ Honoyo Imai.

They participate in the platform at no cost, then receive a 10% revenue share on products sold. Additionally, VIDA often works with its textile mills, printers, and cut and sew factories, removing the middleman costs from the equation.

“We ensure livable wages for our producers and on top of that, offer a literacy program to our factory workers, enabling them to learn to read, write, and do basic math, so they can build a better life for themselves and their families,” says Mendhro.

The San Francisco-headquartered company is currently a team of 6 full-time. The site is launching today.