It’s no longer enough to simply offer on-demand music as part of the value proposition for music streaming services – you have to enable discovery of new tunes and make recommendations, too. While it’s fair to say that Spotify is leading the market in terms of its influential playlist selections, rivals are quickly following suit – including Apple Music and Google Play Music. This week, the latter rolled out its own curated mix, New Release Radio, which it says is crafted with an eye towards the individual listener’s tastes.

The company had first tested the feature through its global partnership with Samsung, announced in April. At that time, Google stepped in to become the default music player and service on new Samsung phones and tablets, in the wake of Samsung’s Milk Music closure in the U.S. 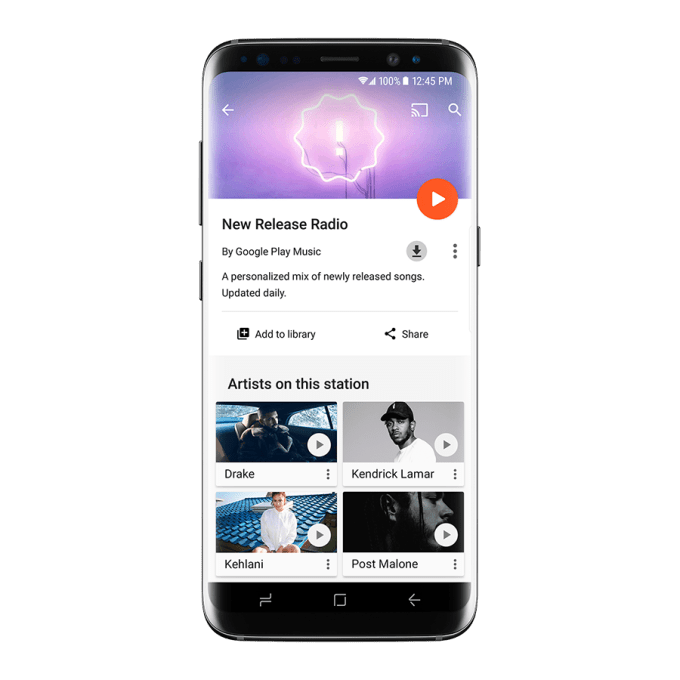 According to Google, it was able to gather feedback from Samsung users through an early access program, and is now able to roll out New Release Radio to all Google Play Music users.

The personalized mix itself is designed to showcase newly released songs from artists you like, or those Google believes you might. The station uses machine learning technology to select from singles and album releases from the past two weeks, based on your listening history on Google Play Music, as well as your broader musical preferences, the company explained in an announcement on Thursday.

The ability to personalize a music service to an end users’ likes is a competitive advantage in today’s streaming music race – an area where Spotify today excels. Its Discover Weekly playlist helped differentiate the service early on, growing to over 40 million listeners as of last year. Spotify then capitalized on that momentum to roll out even more personalized products, including its own Release Radar of suggested new releases you’ll like, which hit last summer; and Daily Mix, a combination of favorite tracks and recommendations, which arrived last fall.

Apple Music also introduced its variations on this theme with personalized playlists like “My New Music Mix” and “My Favorites Mix,” and more recently, a playlist to “Chill” to.

Google’s New Release Radio is currently available to free radio listeners as well as paying subscribers, and will be continually updated with the latest releases, the company says.