With the release of iOS 11’s latest beta on Wednesday, testers can now get their hands on one of the new mobile operating system’s most important — if not most glamorous — new features: a long-needed “Do Not Disturb While Driving” mode. Announced in June at Apple’s Worldwide Developer Conference, the feature aims to combat the very dangerous practice of texting from behind the wheel, while also switching off other alerts that entice people to look at their phones while driving.

Distracted driving has become a national safety crisis because of the rise of smartphones. According to statistics from the U.S. Department of Transportation, 10 percent of fatal crashes, 15 percent of injury crashes and 14 percent of all police-reported motor vehicle traffic crashes were attributed to distracted driving — a blanket term that broadly encompasses cell phone use, as well as other in-car activity like adjusting the radio or climate controls, for example.

A number of third parties have approached the problem by offering mobile applications that prevent texting while the vehicle is in motion, but these can only really be integrated at the system level on Android devices. Because iOS applications run in a “sandbox” environment, they can’t interfere with iOS functions — like preventing someone from texting. Carriers have then stepped in with their own measures, like AT&T’s DriveMode, but these focus on silencing calls and text alerts, but not push notifications from apps.

Because of iOS’s lack of a built-in feature, app makers have come up with all sorts of workarounds, such as the use of external hardware, for example. But more often than not, iOS apps could only offer a monitoring solution, rather than a tool to actually block the activity. Other app makers haven’t even bothered trying to port their solution to iOS. 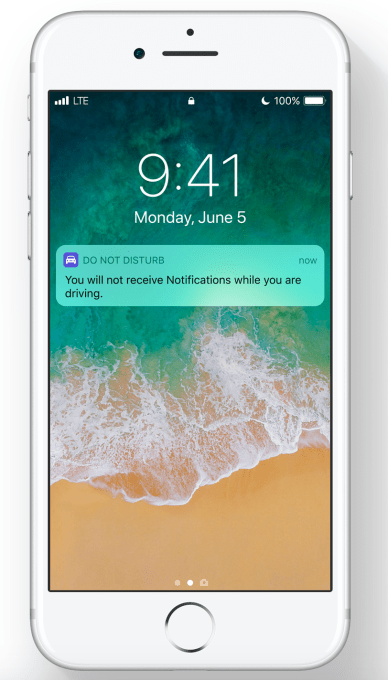 Apple’s “Do Not Disturb While Driving” feature isn’t a tool to fully prevent texting or alerts while in a moving vehicle. Instead, it offers to clamp down on distractions at a system level in a way that Apple has never before offered.

“It’s all about keeping your eyes on the road,” Apple Senior Vice President of Software Engineering Craig Federighi said when introducing the feature at WWDC in June. “When you’re driving, you don’t need to respond to these kind of messages. In fact, you don’t need to see them,” he said while showing a demo where the phone was receiving push notifications from apps like Twitter, Tinder and Words with Friends.

However, the iPhone itself is not on total lockdown. CarPlay functionality still works, for example. You can also still play your music or get navigation assistance through maps and other routing software. Plus, you can configure DND While Driving by choosing which contacts can always get through — similar to how iOS’s “Do Not Disturb” mode works today.

But when the car is in motion, anyone else who texts will get an automated response that reads: “I’m driving with Do Not Disturb turned on. I’ll see your message when I get where I’m going.” A second text also gives them a way to break through and get your attention in the case of an emergency by telling them, “If this is urgent, reply ‘urgent’ to send a notification through with your original message.” 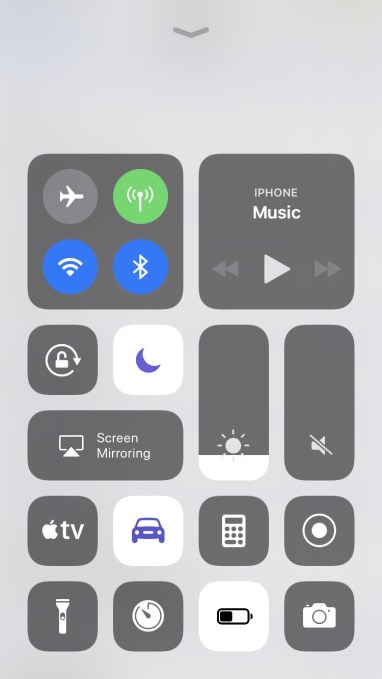 The fact that there’s a way to bypass the setting is key to its adoption.

People worry about being disconnected from their devices for periods of time because they fear that someone won’t be able to reach them in case of an emergency, or other urgent situations. Though we somehow managed to get by before smartphones were ubiquitous, it’s nearly impossible to go back to that state. We’re always connected, and we can’t seem not to be — even if it’s during a short commute to work or school.

Parents also can choose to enable the new Do Not Disturb While Driving feature for their teenage drivers by enabling it in the Restrictions (parental controls) menu in iOS’s Settings. You also can turn it off and on for yourself from the newly revamped Control Center, where a widget is available that lets you enable the feature with a push of a button.

While on, your phone’s screen is dark and only critical alerts get through. The feature’s settings also let you customize the text that’s sent and specify who will receive it (Contacts, Favorites, etc.)

Plus, if you’re a passenger, you can opt to temporarily disable the feature.

Apple is fairly late to the game with this distracted driving prevention feature. Android already offers Auto Reply through Android Auto on any modern Android phone. But despite its delay in getting here, the feature is one of the most significant to arrive with iOS 11.

iOS 11 is currently in beta, and will be released to the public this September.