Snapchat’s next big feature wants to get you to meet up with friends in real life rather than just watching each other’s lives on your phones. Snap Map lets you share your current location, which appears to friends on a map and updates when you open Snapchat. It’s rolling out today to all iOS and Android users globally.

“We’ve built a whole new way to explore the world! See what’s happening, find your friends, and get inspired to go on an adventure!,” Snap writes on its blog.

[Update: Snap Map was based on Snapchat’s secret acquisition of social map app Zenly for $250 million to $350 million. Read our full story on Snap’s acquisition of Zenly here.]

How to use Snapchat’s Snap Map

When you open Snapchat once you have access to the feature, you can choose to share your location with all your friends, a few friends you select or you can disappear from the map at any time by going into Ghost Mode or not opening Snapchat for a few hours. Alternatively, location sharing is turned off by default and you can leave it that way to just lurk, watching what friends are up to.

To access the Snap Map, you pinch on your Snapchat camera home screen. From there you can scroll around to see where friends are in your city or around the world. Tapping on their “ActionMoji” BitMoji avatar opens their Story to show what they’re up to, or lets you message them directly to make meetup plans. Snapchat automatically picks an ActionMoji for you based on your location, time of day and other factors. 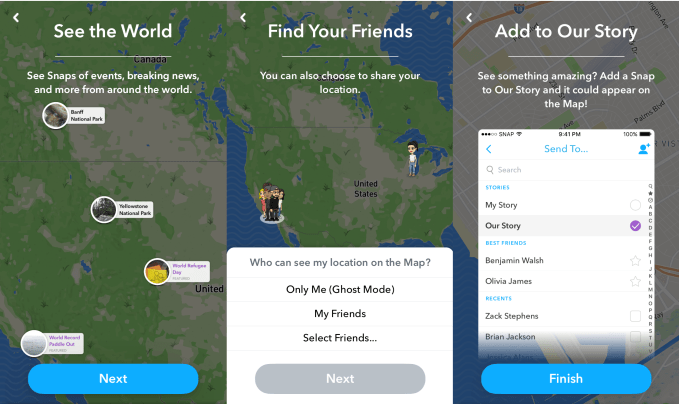 Outside of the location-sharing element, Snap Map also gives users an alternative way to discover Story content beyond the well-worn Stories feed and the powerful but buried Story Search feature. Users can submit Snapchat Story posts to Our Story to be eligible for their content to appear to non-friends for around 24 hours. You also can see “heat” colors on the Snap Map to see where lots of Snaps are being uploaded, which might indicate a concert or big event from which you’d want to explore Snap Stories.

Snap tells me that Snap Map is designed for enhancing connections between people and their closest friends — engagement that makes up nearly 60 percent of interactions on Snapchat according to data from Sparkler that was commissioned by Snap.

These new ways to surface content could earn Snapchat more money by getting users to watch more Snaps, even if they’re not trying to meet up with friends. However, for now, Snap tells me there won’t be any ads on the Snap Map. If you see a cluster of content labeled Featured, that just means it’s curated by Snapchat’s team and will appear in the Discover section, as well.

Overall, Snap Map creates a low-friction way to see where your Snap-addicted friends are and what they’re up to. While not as precise as a real-time location-sharing feature, it’s also less likely to creep people out.

[Update: Snapchat appeared to have copied social map startup Zenly for this feature, but now we’ve learned that Snap Inc has acquired Zenly for $250 million to $350 million in mostly cash and some stock. Snap will keep Zenly running independently, similar to how Facebook runs Instagram independently. Read our full story on Snap’s acquisition of Zenly here.] 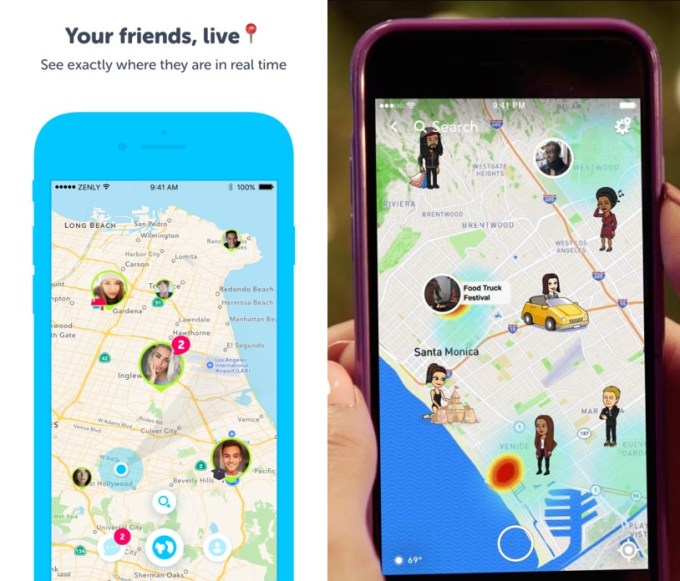 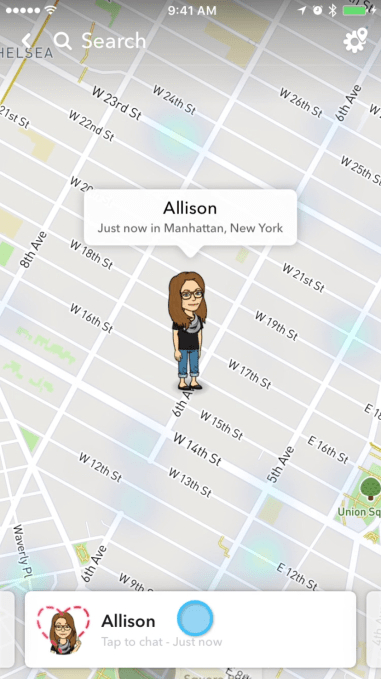 Snap Map will compete with Facebook Messenger’s recently launched Live Location feature. But because Snap Map only updates when you open the app, it’s more geared toward privacy and saving battery life. While Facebook wants to be your bridge to all the acquaintances in your life, Snapchat is focusing on your best friends you can’t live without.

A year ago I wrote that Snapchat and Messenger were the best equipped apps to launch location-sharing features and “cure loneliness,” and now the two are going head-to-head. The Information reported earlier this week that a Snap Maps feature was in the works.

Snapchat has needed something new and special to kick some life into the service after it started getting out-competed by clone Instagram Stories, which now has 250 million daily users compared to Snapchat’s 166 million. Turning the app into more of a communications and offline meetup utility instead of just an online content-sharing network could give teens a whole new reason to stay glued to Snapchat.