Snap’s growth rate increased just a little in Q1 2017 — a bad start to its first quarterly earnings report since going public. Snap hit 166 million daily active users at a growth rate of 5 percent, compared to the 158 million DAUs it had in Q4 when it hit a 3.2 percent growth rate. Snap’s year-over-year growth rate continued to slip, falling to 36 percent year-over-year from 48 percent in Q4.

Snap shares immediately fell more than 24 percent in after-hours trading as investors fled, seeing its long-term potential scale diminished by its current growth struggles. It’s now trading around $18.19, by far the lowest since it went public.

Snap added just 3 million new users in North America in Q1 to hit 71 million DAUs, the same number as in Q4. Because it relies on its home market to drive its revenue, this slow growth is especially troubling. Snap added 3 million in Europe to hit 55 million DAU. In the Rest of World region it added just 1 million users to reach 40 million DAU, which was actually an improvement as it stayed flat at 39 million in Q3 and Q4. 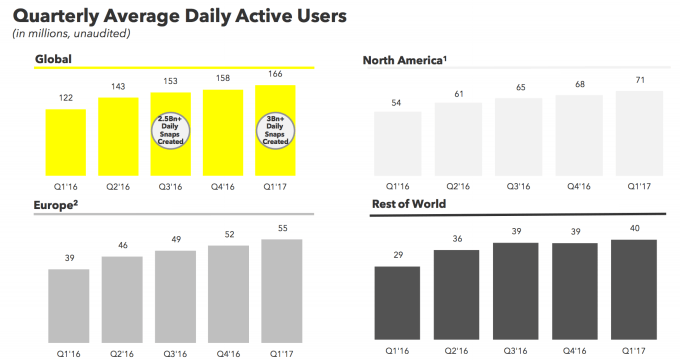 It’s clear that Snap wants to downplay the low user growth, considering it slapped a big “3 billion+ daily snaps created” label ON TOP of its DAU graph. As TechCrunch predicted, Snap is desperately trying to highlight the depth of its engagement in the face of weak DAU growth.

On its first earnings call, CEO Evan Spiegel sounded glum, and spoke for just a few minutes. He focused on highlighting the company’s progress on Android development. Spiegel said that improvements to the performance of the Android app led Snapchat to double the amount of net additional Android devices on the network, and Android accounted for 30 percent of net additional users in the quarter.

Chief Strategy Officer Imran Khan says that Android improvements led Snapchat to now see an average of “over 30 minutes” per day per user, up from the 25 minutes to 30 minutes figure it gave ahead of the IPO.

Snapchat did break out one interesting new number. It earned $4.5 million on Spectacles and its “other revenue” category in Q4 2016, and over $8.3 million in Q1. That would mean it could have sold up to 98,000 pairs of Spectacles, though the number is likely slightly smaller due to other revenue sources being included here.

In response to questions about how Snap could boost its growth rate, Spiegel dismissed “growth hacking” techniques like having users invite their whole address book to join Snapchat or follow them. The CEO thinks these techniques aren’t sustainable long-term, and that if people added all their friends instead of just a few, they might feel uncomfortable sharing more authentic personal content.

As for how Snap will deal with Facebook copying it, Spiegel declared the “overall importance of creativity” to Snap’s business. He said you have to expect people are going to copy you. Just like how Google forced companies to develop their own search strategies, Snapchat is forcing competitors to develop a camera strategy. But that reliance on the vague concept of “creativity” didn’t provide much insight into exactly how Snapchat will prevail over bigger, better funded competitors from Facebook.

Snapchat grew quickly from its early days, hitting its stride in late 2015 and early 2016. It grew 13.8 percent in Q4 2015, 14 percent in Q1 2016 and 17.2 percent in Q2 2016 to reach 143 daily active users. But in August 2016, the launch of competitor Instagram Stories and the removal of the auto-advance feature that chained friends’ Stories together occurred. TechCrunch predicted Instagram’s clone might not lure away loyal Snapchatters but could significantly hinder its growth. Analytics companies and social media celebrities told TechCrunch they had seen Snapchat view counts drop between 15 percent and 40 percent, while some users began to prioritize sharing and watching on Instagram.

When Snap Inc. filed to IPO in February, it revealed numbers showing that growth had plummeted. Snapchat grew just 7 percent in Q3 2016 and 3.2 percent in Q4. That means Snap’s growth fell nearly 82 percent to just 1/5th of its speed before Instagram Stories’ launch. 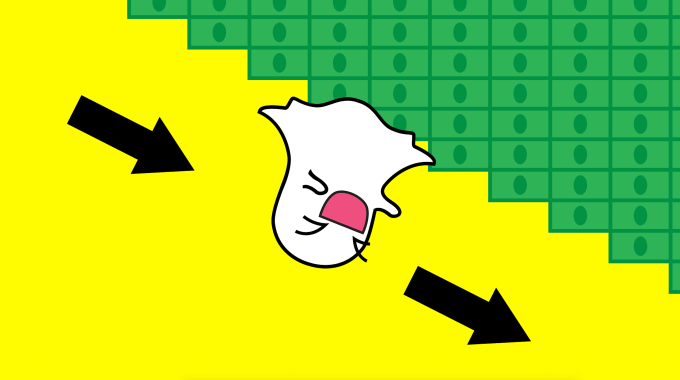 Snap has sought to stay one step ahead of Instagram and Facebook. It’s developed more “Shows” with television networks for its Discover section. It began rolling out a Stories Search feature for viewing publicly submitted posts about certain topics. And it’s launched new creative tools like its Scissors cut-and-paste feature, Magic Eraser for Photoshopping objects out of images and augmented reality World Lenses that insert make-believe 3D objects into your Snaps.

Now with growth still struggling, the question is whether Snapchat can continue to survive Facebook’s onslaught, especially as the tech giant rolls out Snap’s best features to its international markets, potentially blocking future growth for Snapchat. 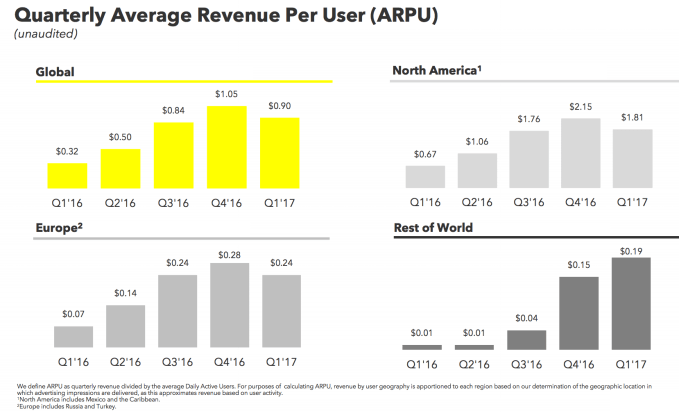 If it can’t prove it can get to massive scale, Snap will have to tell a tougher story about grinding out a higher average revenue per user and deeper time spent in the app in order to grow its business. But the problem is that ARPU isn’t growing fast enough either. While it’s normal to earn less in Q1 than the holiday Q4 season, Snap’s ARPU grew just 7.1 percent since Q3 2016.

Without rapid user or revenue per user growth, Snap investors are reconsidering its formerly lofty valuation.