The launch of Hike Wallet not only shows an ambition to build a messaging platform, it also means Hike has beaten WhatsApp, the chat app that dominates India, to the punch. Facebook-owned WhatsApp is typically coy about future updates and services, but co-founder Brian Acton has spoken publicly of plans to launch digital payments in India, which is its largest market with over 200 million active users. Hike, meanwhile, was most recently valued at $1.4 billion, but it is still not disclosing active user numbers other than to say that over 100 million people are registered users.

Hike, which is introducing version 5.0 today, is starting out with peer-to-peer and bank-to-bank payment options, the former being an in-app wallet that is not dependent on a bank account and the latter a service powered by India’s government-backed UPI payment system. Beyond sending cash to each other, Hike has also introduce a ‘blue packet’ feature that lets users gift digital envelopes of cash for special occasions, such as birthdays. 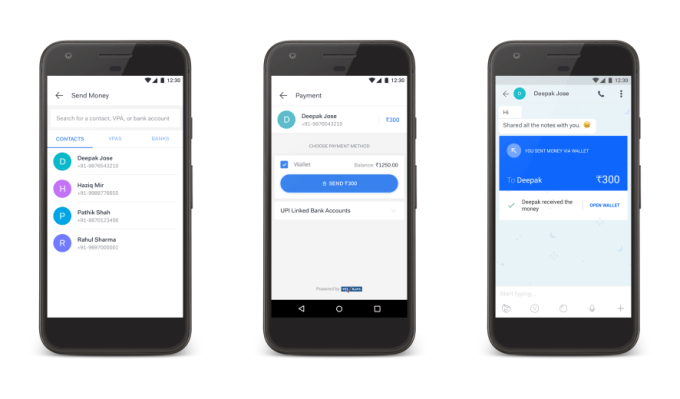 This feature borrows heavily from WeChat and the tradition of ‘hongbao’ (or red envelopes) in China. WeChat, and its payment system in particular, grew rapidly in China through the digitization of the traditional gifted envelopes of cash around Chinese New Year, which can be sent via the WeChat app.

In an interview with TechCrunch, Hike CEO and founder Kavin Bharti Mittal described a product very much like WeChat’s red envelopes.

“We’ve drawn some inspiration from our friends in China,” he explained. “We think it’s going to be extremely exciting.”

Red envelopes helped further popularize WeChat in China, but they also enabled the service to collect payment information for future use without being overly pushy. With relatives sending and receiving cash, users were strongly compelled to supply their bank or card details to get involved. That made priming them for other kinds of financial service, like point-of-sale payments, far easier.

In the same way, Hike is hoping to aiming more with its payments push over time.

Initially, Hike is giving users phone bill payments and recharge options, with Yes Bank powering those features, but there are plans to add more general online payments to the mix.

Using UPI, he said, will enable stakeholder participation, while Hike hopes to bring developers and partners to the table to extend the use of Hike Wallet over the next six months. Further down the line, he’d like to see the service being used for common mobile payments, as is the case for WeChat Pay in China.

The issue of WhatsApp is a common one.

The service is booming in India — thanks to the simplicity of its service and performance on limited internet connections — and Facebook is well aware of its popularity and keen to take advantage of that, with payments just one strategy under consideration. Hike has not updated its user numbers since January 2016 — which has been cause for negative speculation in the media — but still Bharti Mittal is adamant that his company is well used, and much-needed in India regardless of WhatsApp’s success.

“WhatsApp does not have to lose” for Hike to succeed, he explained. “Many people have WhatsApp and Hike on the same phone.”

The average active user, he added, spends 24 minutes in the Hike app each day, and talks to six to ten friends there.

WhatsApp is one thing, but India’s mobile payment space is already condensed with specialists. Paytm, which has raised money from Alibaba and most recently SoftBank via a $1.4 billion investment, leads the pack with over 200 million registered users. MobiKwik is purely focused on payments and claims 50 million users, fast growth and a potential $1 billion valuation soon.

Hike will also need to contend with these payment specialists, and that’s no easy task.

Aside from payments, Hike 5.0 is also re-introducing the app’s social network-like timeline feature, which was retired when Hike added Snapchat-esque Stories last year.

“The market is still getting comfortable sharing photos and videos. What we got wrong is that one replaces the other. It does not,” Bharti Mittal explained.

Other new features in the app include a selection of themes to customize the app’s color and design, a beautification camera option, and a file size reduction from 40MB to 25MB.