With high-profile investments from Alibaba and SoftBank fueling an impressive growth story since demonetization last year, you could be forgiven for thinking that Paytm has India’s payments market sewn up. But at least one company will agree to differ on that.

MobiKwik, the mobile payments startup that is number two to Paytm in India, is quietly confident that it can take advantage of its rival’s focus on e-commerce and recent entry to banking to even the playing field. To strengthen its case, MobiKwik, which is solely focused on payments, is in the process raising its largest financing from investors to date.

Co-founder Upasana Taku confirmed to TechCrunch that the company is in talks to raise $100 million-$150 million in a round that would value the company at more than $1 billion, thereby putting it into the elite club of tech unicorns. Taku declined to name the investors that her company is talking to, saying only that they include one major strategic investor and a number of financial institutions. She expects the round to close in the next couple of months. The plan is to invest as much as $45 million of the capital on growing user and merchant bases, and expand its current base of six offices to more than 20.

With Alibaba ploughing funds into Paytm and already holding a stake in Snapdeal, the scene is set for its arch rival Tencent — which recently invested in e-commerce giant Flipkart — to grab a piece of India’s payment landscape. Taku declined to comment either way when asked whether Tencent is among the investors that MobiKwik is negotiating with.

Investors aside, that valuation would be notable for MobiKwik, and India’s startup scene itself. The round could double MobiKwik’s funding to date, which stands at just over $125 million. However, it would remain the underdog in its battle. Paytm has risen to become India’s second highest-valued private tech firm — behind only Flipkart — with a valuation of $7 billion following a huge $1.4 billion investment from SoftBank and a $200 million round led by Alibaba.

Paytm and its parent company One97 have raised over $2.5 billion from investors. That’s pushed its business into e-commerce — where the influence of Alibaba is strong — furthered its mobile payment strategy, and seen it branch out into digital banking, via a yet-to-launch project that borrows heavily from China and, again, Alibaba. 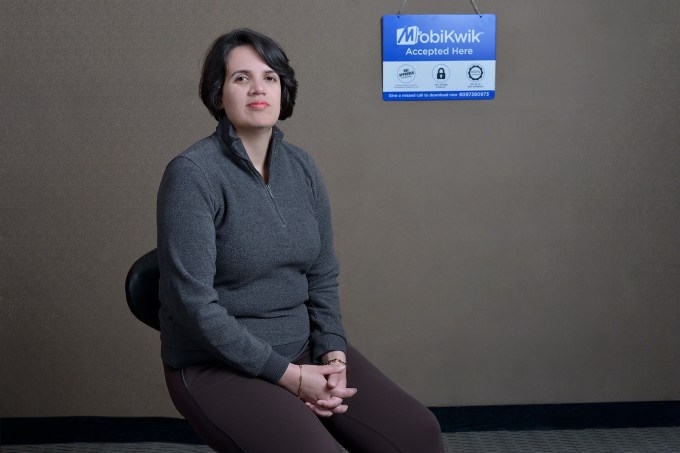 On paper, the statistics of its business are hugely impressive. India’s demonetization in November of last year, a move that saw ₹500 and ₹1,000 banknotes (85 percent of total currency) removed from circulation, gave Paytm a huge boost. In the immediate aftermath, traffic grew 435 percent, downloads jumped 200 percent and overall transactions increased by 250 percent. The firm finished the year with 177 million mobile wallet customers — up from 122 million a year earlier — and it went on to cross the 200 million mark at the end of February.

Taku takes issue with some of those numbers, though. She pointed out that Paytm is yet to surpass 100 million downloads on Android — India’s overwhelmingly dominant mobile operating system — according to the Google Play Store, which she asserts makes it “hard to imagine” that it has more than nearly 250 million registered users as it claims.

But beyond paper-based claims, she believes that her firm can take advantage of forays into other verticals that have left Paytm with “its hands full.”

“It is reneging on payments while it is pushing bank and e-commerce services,” she told TechCrunch in an interview. “Something’s got to give, it is not possible to do justice on 10 different verticals.”

As an example for her argument, she cites the example of Ola Money, the payment service that Indian ride-hailing giant Ola spun out into a standalone business in late 2015.

“I don’t see Ola Money accepted in many places,” she remarked, adding that e-commerce firms have also had to prioritize their focus. “Whether it is Amazon or even Flipkart, their clear focus will be on payments on their platform. In India, a lot of people tried it, thinking payments is the easiest thing to do.”

The company also claims to have ridden the wave of demonetization. Taku said its registered userbase jumped from 25 million to 55 million, while its merchant base rose to 1.5 million from 250,000 before demonetization and downloads rose ive-fold . MobiKwik’s ambitious target is to sustain that growth and reach 100 million users and 10 million merchants in the next year.

“Our payment gateway business has seen crazy growth — demonetization has been great for us, all business numbers have grown at least 3X,” Taku said. “We couldn’t have imagined where we’d be in terms of numbers. Now, we’re net revenue profitable — when you remove merchant acquisition costs — and are on a path to profitability.”

That final push to go to make profit will come from the introduction of financial services later this year, the MobiKwik co-founder said. She said that the services will be directly related to MobiKwik’s existing business, for example lending, insurance and investing, alongside partners. One such example is a deal announced with state-owned telecom operator BSNL to gives its 95 million customers basic financial services via a co-branded wallet app.

Currently, the service processes $2 billion in annual GMV — that’s the overall value of transactions — but it is aiming to reach $10 billion by the end of this year.

Taku is bullish on the future beyond 2017, pointing out that digital payments currently account for just 15 percent of the estimated $1.5 trillion that is spent by consumers in India each year. She said the figure could reach 60-70 percent over the next two years — and is clearly determined to ensure that Paytm isn’t the sole beneficiary of that boom.