In its first act since raising $175 million from Chinese internet giant Tencent in August, India-based messaging app Hike has become the latest to clone Snapchat.

The Tencent deal, which valued Hike at more than $1 billion, may have raised eyebrows, but this week’s update is less surprising. Hike is in good company in taking “inspiration” from Snapchat. Instagram copied its ephemeral features — and admitted to doing so — while Korea’s Snow, with 80 million downloads and an acquisition bid from Facebook, is the most notable of many Snapchat clones to emerge worldwide.

Hike, which claims 100 million downloads, admits that it drew inspiration from Snapchat. But CEO Kavin Bharti Mittal told TechCrunch that the focus is on localizing the service and scaling it in India.

“We’ve been thinking [about adding these features] for over a year now,” he said in an interview. “The idea isn’t new but our content is localized which makes it more fun, that’s something we’ve got good at thanks to stickers.”

Originality aside, he believes Hike will enjoy first-mover advantage in India, a country that Snapchat has not prioritized at this point.

“We will be the guys who bring this idea to India at scale first,” he said.

Hike’s localization includes setting the duration of stories to 48 hours, unlike Snapchat’s which are set at 24 hours before they disappear. Bharti Mittal said this gives Hike users a full weekend and helps cater to data issues that some users in India are constrained by. There are also locally relevant filters, including one that turns your face into Indian Prime Minister Narendra Modi.

While Hike has cloned Snapchat here, for sure, Bharti Mittal argued that the changes are a result of observations that his team has made. (The recent funding helped bring the updates to market faster than expected, he said.)

For one thing, Hike’s social timeline — a Facebook-like timeline inside the chat app — was no longer working as initially hoped and it has now been killed off.

“While [Timeline] has done pretty well, we started to notice that as the like count increased [on photos and posts] there was more pressure to post great photos. It really went against the idea that we built Hike upon, that a user can be yourself. We started to question the role of timeline and began looking for a new social group that would complement stickers,” Bharti Mittal said.

Coupled with that, the launch of Reliance Jio’s 4G network in India and the development of other carrier’s services has meant that now one-third of Hike’s users are on 4G.

“The majority [of our users have] access to 4G and Wi-Fi,” he added. “India is a sight and sound market, [so] with 4G coming in and becoming cheaper it was clear to us to bring photos and videos to the center.” 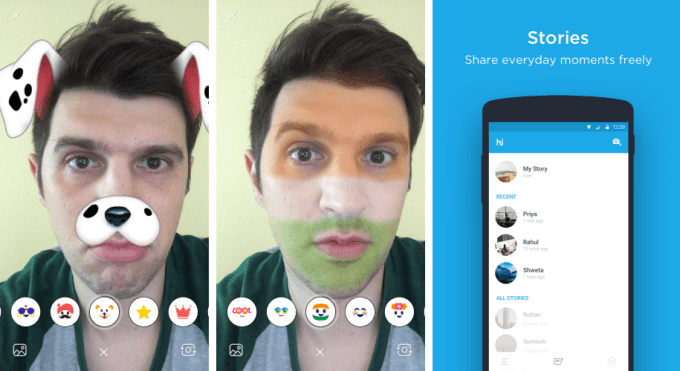 Putting these new features into the app, coupled with others features and services that were inspired from other chat apps — such as games from LINE, and official accounts from WeChat — makes Hike a very different service to WhatsApp, which is India’s dominant chat app. India is also WhatsApp’s largest market, so it stands to reason that Hike must differentiate itself.

Bharti Mittal, unsurprisingly, said he believes that already the two apps are “fundamentally different.” He believes that most major markets have space for “two or three” messaging apps.

“We’re on a different path altogether,” he said. “These new features takes us one step more towards becoming this social messaging app.”

“The camera plays a very large role,” he further explained in what seems very Snapchat-like rhetoric. “Most people think of the camera as a small app that can take photos and videos, [but] smartphones are getting eyes that can see and understand what is happening.

“The camera becomes the new keyboard… the camera is by far the most frictionless way to engage with anything around you.”

The Hike CEO refused to discuss what features we can expect to see in the app next, but he did say that Hike Stories would receive iterative updates to include more content, a public story option, private messaging, geotagging, etc. — nothing out of the ordinary there.