Twitter fell apart in 2013 when its growth slowed significantly in the face of competition and copying from Facebook, and users found it too hard to find the best content due to its unsorted reverse chronological feed. Its share price fell 18 percent a quarter later as the growth troubles continued.

Snapchat fell apart today when its growth slowed significantly in the face of competition from Facebook, and users found it too hard to find the best content due to its unsorted reverse chronological feed. Its share price fell 24% as its growth troubles continued.

4 years later, Twitter is finally growing again because it accepted that it had to abandon one of its core product characteristics, the unfiltered feed. Twitter finally moved to an algorithmically ordered feed that surfaced the best content at the top from the people you care about most. In Q1 2017, it posted its first big growth in years, adding 9 million users.

Today Snap announced it added just 8 million new users this quarter at a growth rate of 5%, hardly better than 158 million users and the 3.2% growth rate of Q4 2016 after Instagram cloned Stories and stunted Snapchat’s growth. Wall Street promptly eviscerated it. 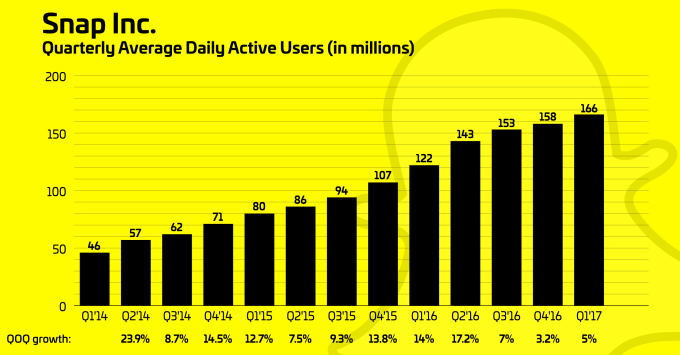 Now it’s time for Snapchat and CEO Evan Spiegel to learn from history. Snap’s anti-Facebook philosophy has helped it develop disappearing messages and the Stories format by discarding the permanence of Facebook’s email-esque messaging and profile timeline. But now the unsorted Stories list is causing people’s best friends to get lost amongst the acquaintances and celebrities they follow. As I wrote last month, Snapchat is stifled by its un-algorithmic feed.

Yet Spiegel gave no sign of flexibility in his strategy during today’s earnings call. Instead he remained defiant, claiming that “If you want to be a creative company, you’ve got to get comfortable with and basically enjoy the fact that people are going to copy your products.” He joked “just because Yahoo, for example, has a search box, it doesn’t mean they’re Google.”

But this downplaying of the Facebook threat could be dangerous to Snap, and to investors who have no say in the company’s direction.

While adding extra creative tools like yesterday’s Magic Eraser and the recent 3D augmented reality World Lenses are nice, they don’t make Snapchat fundamentally more easy or useful for more people. Snapchat may need to be willing to challenge some of its most deeply held product philosophies to become attractive to all teens around the globe or a wider range of demographics. Otherwise, it will have to settle for being a “small” social network.