Rules governing the use of food delivery robots remain to be seen across the US. But major food businesses are investigating the possibilities already. In the latest deal, Yelp Eat24 has begun testing delivery by robot in partnership with Marble in select San Francisco neighborhoods.

Marble is one of a handful of ventures developing ground-based robots that can navigate autonomously to a customer’s address. Their machines look like a large kitchen appliance crossed with a Mars rover.

Users order as they normally would through the Yelp Eat24 site or app. They are asked if they’re cool with robot delivery. If they opt in, they get a pin code texted to their phone, which they can use to unlock the robot’s cargo bay when their Marble delivery arrives. After retrieving their food, they close the door and the robot returns to Marble HQ or another restaurant.

Matt Delaney, CEO and cofounder of the San Francisco startup said, “We’re starting with meals, but think our robots will be useful for everything from groceries, to pharmacy and parcel delivery in the long run.” Marble’s robots are designed to be “courteous in an urban setting,” Delaney added.

With on-board lidar, cameras and ultrasonic sensors, as well as Nvidia’s Jetson TX1 AI supercomputers, Marble’s robots perceive the environment around them. They can operate day or night, using high-res, 3-D maps of the sidewalks, buildings and more in the neighborhoods where the company offers its services.

Structurally, the entire back section of the Marble delivery robot can be swapped out. While Marble hasn’t built this feature yet, it plans to someday  offer “temperature control,” turning its robots into a kind of roving refrigerators or ovens. For now, Marble will rely on Yelp Eat24 “heat bags” to keep food warm while traveling a short distance, typically within one mile, from a restaurant to the customer’s door. 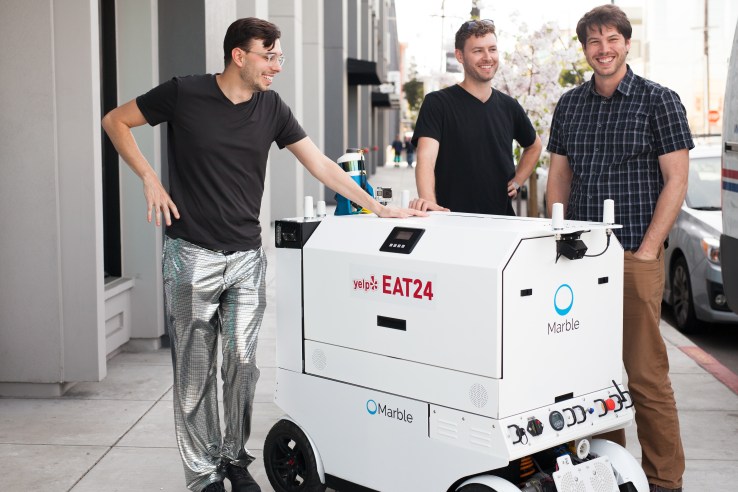 Yelp’s user-generated reviews have long influenced the restaurant business, but the company only began to facilitate food delivery following the acquisition of Eat24 in early 2015. Head of Delivery Operations for Yelp Eat24, Shalin Sheth, said that today the company works with about 40,000 different restaurants. Most do their own delivery. But Yelp offers a partner program connecting them with fleets that can deliver their food if needed.

The partnership with Marble is mostly experimental, he said. “People running restaurants are going to want to know, should I start using technologies like this as they come online? We need to have answers for them. We need to figure out what works.”

Yelp Eat24 is paying Marble just like it would any other delivery partner. So, Marble gets a per-delivery fee and any tips that people who order feel inclined to give them. It’s not likely that people will feel compelled to dole out tips to a robot, though.

For the time being, Marble is sending a human “chaperone” alongside each one of its delivery robots in San Francisco said Harrison Shih, Marble’s head of product. That’s partly to tell curious passersby all about their robots, but also to gather community feedback. Additionally, Marble robots are observed via monitors back at company headquarters. 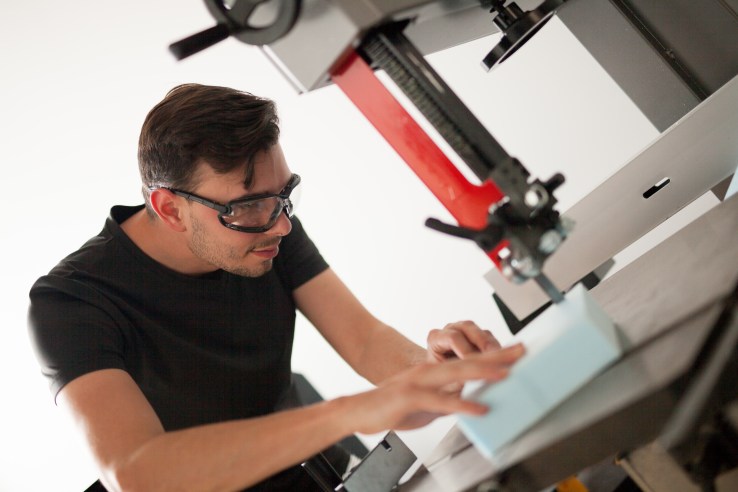 Marble developed its robots at the hardware foundry Lemnos Labs in San Francisco. The company has so far raised $4 million in seed funding in a round led by Eclipse Ventures, joined by Maven Ventures, Amplify Partners and Lemnos’ venture fund.

Eclipse Partner Greg Reichow said Marble’s team had a background building space-grade systems, which gives them an advantage in building robotics for use in normal gravity, even autonomous vehicles that will operate in uncontrollable environments. He said, “Their focus on addressing human interaction and how to be a good member of the community will be a key differentiator in their long term success.”