Drone delivery startup Flirtey has raised $16 million in Series A funding to bring its high-flying service to new customers, companies and possibly countries. Earlier, the startup raised $120,000 in seed funding and participated in the Y Combinator accelerator. Flirtey was also the first company to attain FAA approvals to conduct a drone delivery in the US in 2015. That fact helped it land one of its drones in the Smithsonian’s National Air and Space Museum, a milestone that CEO Matthew Sweeny calls a “kittyhawk” moment for the startup.

Last year, Flirtey generated a buzz in food and retail when its unmanned aerial vehicles began delivering Slurpees from 7/11 to thirsty denizens of Nevada. The startup has also flown pizzas to Dominos customers in New Zealand, a service the food company has made into a long-term offering to its customers.

Flirtey’s efforts to-date hint at what our future might look like when stores become so convenient we don’t even have to go to them. Instead, they may come to us through the air. But as everyone knows, that kind of innovation doesn’t come cheap. Without an abundance of venture capital, drone delivery companies like Flirtey probably wouldn’t even be able to get off the ground.

Given the number of regulatory approvals, test runs and partnerships that Flirtey has racked up, it should probably come as no surprise that the drone tech startup raised a meaningful Series A round of funding.  VC’s are bullish on drone related tech and services, still. According to Crunchbase Pro data, 95 drone tech companies raised equity funding rounds of at least $500,000 in 2016, with the average funding round at $6.8 million and total invested across that group hitting $482.8 million.

Flirtey’s Series A round was led by the company’s seed investors, Menlo Ventures and Qualcomm Ventures, and joined by Chris Sacca’s Lowercase Capital, Y Combinator and World Innovation Lab, a firm that counts among its limited partners the Japanese airline ANA, Goodwater Capital, Amity Ventures and Partech Ventures.

Menlo Ventures’ Managing Director Mark A. Siegel, now a Flirtey board member, says drone tech and services are of interest to his firm because the technology is poised to dramatically impact multiple industries. “In delivery, we think that at scale drones will be the most efficient and lowest cost mode of transport for small packages that require time sensitivity– think medical supplies, fast food, and on-demand e-commerce,” he said.

Menlo backed Flirtey in particular because it is already seen as a drone delivery leader with sound technology and sensitivity to new laws governing drone use around the world. Siegel said, “People will be very surprised when they find out real this is. The regulatory environment will benefit those companies with most flight hours and safest track records.” 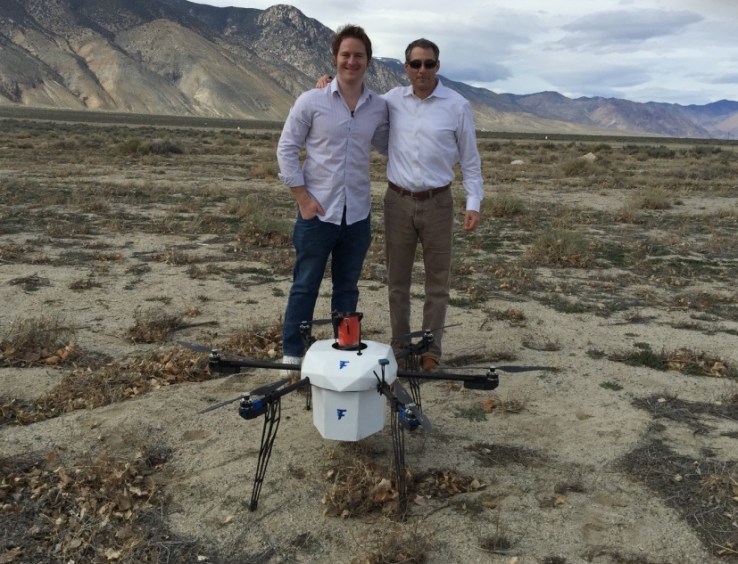 Flirtey’s CEO said the company’s drone was designed with reliability and safety as priorities, obviously. Its flagship UAV is a hexacopter that can fly right if one of its six motors is taken out. It has two batteries, and can run if one of them fails, as well. The drone lowers a payload in a box from about 50 feet over a customer’s doorstep or other designated delivery area. If a would-be drone thief attempts to pull it down by the line, the drone detaches and safely fly away, Sweeny explained.

Flirtey’s competition includes venture-backed startups like Matternet and Zipline that have purpose-built their own drone platforms for deliveries, too. Zipline is engaged in medical supply distribution in Rwanda, already. And Matternet recently forged a partnership with Mercedes Benz that would see its drones flying supplies across a last mile from a van to a customer on a construction site, for example, or other places where it would be hard to drive right up.

Stiffer competition may come from titans in tech like Alphabet or Amazon. Alphabet’s drone efforts seem to be focused, of late, on building a marketplace rather than developing new types of drone hardware these days.  Meanwhile, Amazon.com just began making deliveries in the UK last year, but still hasn’t rolled out its Prime Air drone deliveries in the US.

Besides, Flirtey investor Varun Jain said, “Flirtey should want Amazon to succeed at their mission, because they will become a market creator. Everyone in the ecosystem from Walmart to Tesco will want parity, and these companies will make Flirtey a partner of choice.”

Sweeny said the company plans to use its funding primarily to run more deliveries for its existing clients, and to get in front of new potential customers in retail in the US, New Zealand and later, in Japan. “There are next generation technologies in the pipeline as well,” he said. But he declined to discuss the company’s plans for advancing the capabilities of its drones. He and investors also declined to disclose a valuation for the Series A funding round.