Uber can’t seem to avoid headlines for the wrong reasons right now, as it gets slammed for its toxic work culture, its connections to a polarizing U.S. President, and its CEO’s attitude to Uber drivers.

But despite all that, the transportation company — currently valued as high as $68 billion — continues to grow and has ambitions to expand its business into ever more areas. One of the latest, TechCrunch has learned, involves the app itself.

Uber wants to turn it into a “content marketplace” — a feed of entertainment and other features with potentially dozens of third party content partners, designed to grow engagement in the Uber app itself — going beyond the basics of ordering rides and rating drivers.

According to documents seen by TechCrunch, the marketplace will be based on a new version of Trip Experiences, a smaller feature first launched a year ago with a select group of partners.

In the future, when a user gets into an Uber, the Uber app will turn “into a rich feed of cards,” in the words of Uber itself: a series of third-party apps will provide you with more information about the area or specific place you are going; some entertainment while you’re travelling; work and productivity integrations; and communications with the place where you are going specifically.

Here are sample cards as detailed in the presentation:

The expanded marketplace, according to the presentation, is currently planned for an early April launch.

Uber declined to comment to TechCrunch about its future plans.

Initially, Uber will not charge developers to be a part of the new Trip Experiences feature, according to our source, who was provided the presentation in a capacity as a third-party developer. Another source who talked to TechCrunch said there are no plans for Uber to include advertising in the feed.

However, there are elements of the redesigned Trip Experiences that do appear borrow from world of ad tech, as well as Facebook’s app platform. It will include a carousel-like app gallery, where services and apps can be “discovered” by users and connected into the Uber app.

And there is a second option for “re-engagement”, which enables apps to submit content into the Uber Feed, if the user already has the app on their phone. This can be used to notify users of the temperature of their smart thermostat while they are on their way home, or show a to-do list while they are headed to work — all within the Uber app.

Uber is also pushing contextual engagement that might, for example, enable a Snapchat user to unlock special stickers or filters, or showcase Instagram searches of the destination they are headed to, or, in the case of Uber Pool rides, show if they share mutual Facebook friends with other passengers (presumably only if you opt in, otherwise this could prove to be a privacy nightmare).

In the case of app showcasing, Uber could provide an opportunity for developers or companies seeking to target an audience of relatively tech-savvy users.

Considering all of the above, you can see how a revenue share on transactions, or fee for a content partner to appear in the feed, clearly could become a new business opportunity for Uber if this takes off.

But for now, the idea seems to be something else that Uber is positioning itself as having a wider purpose for its customers, beyond providing basic transportation from point A to point B.

It taps into the fact that Uber has a captive audience (its passengers sitting in vehicles). Uber users have completed over 2.5 billion rides to date, according to the company, with 10 million rides each day across the more than 70 countries and 400 cities where Uber is active.

And it has potentially a very wide reach into the lives of that captive audience. Uber notes that “commute time” in the U.S. alone is 19 hours per month, making it second in time spent only to Facebook and Spotify at 21 hours/month each. Of course, not every commute is an Uber commute — and that is likely another reason for building out Trip Experiences: a useful feed of information, tailored to your ride, gives Uber another way to attract users amid competition from a number of other apps and other transportation options.

Going from A to C(ontent)

Expanding Trip Experiences to take over your feed is also a natural progression of what Uber has been developing for the past year.

Trip Experiences first launched in January 2016 to help Uber users fill dead time while on the move. The feature was originally focused around a select group of content — it included news from the Washington Post and Bay Area hyperlocal blog Hoodline; searching for coffee and internet-friendly cafes near your destination with Cupper and Work Hard Anywhere; podcasts timed to the duration of your journey with Otto Radio; and more.

Uber then expanded some of that in-app activity in November 2016, when an app update brought in a feed to “make the most of your ride” with the ability to browse Yelp and Foursquare; play with Snapchat filters; stream Pandora songs and order Uber EATS to arrive at the same time as you do.

Uber has often been described not as a transportation but a technology company, and the growth of this content marketplace — which theoretically could even be used when you’re not even in an Uber vehicle — underscores that. But it also, crucially, can help corral users back into Uber’s core transportation business: developers putting content into Uber’s feed can also use Uber’s “Ride Request Button” API in their own apps to give users the option to book Uber services. 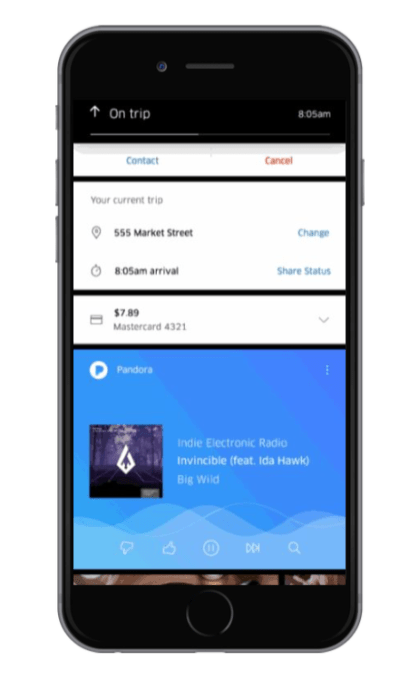 In its pitch to developers, Uber is positioning this content play as one of its four key ways that it can help businesses grow. The other three are rides (by way of that API that lets businesses integrate ordering an Uber directly into their apps); delivery-on-demand via Uber Rush; and “making driving more rewarding” for its drivers — that is, a separate Driver API where developers can build services that target these drivers as customers/users.

The new program will give Uber a way to widen its content partners, but it isn’t quite an open door for all.

Uber, we understand, is working closely with selected partners who come on to the platform to ensure that what they bring is the right blend of contextual experience or entertainment, so don’t expect the Uber app to be overridden with unapproved messages and services.

If Uber has its way, this could become the next big push to help tie Uber closer to your life. The big question, of course, will be whether consumers want that kind of platform growth from a company that has been in the news too much lately for how it has abused its growing power and position already.