For all of its consumer electronics prowess, mobile has always been a tough proposition for Sony. The Android market is overcrowded for one, and the company hasn’t really done all that much to set itself apart from the pack — save for one key saving grace: really great cameras.

Imaging is once again the standout feature on the trio of Xperia handsets announced this morning at Mobile World Congress. The flagship XZ Premium best demonstrates the phenomenon, sporting the company’s Motion Eye camera system, which delivers some truly stellar slow motion video capture — easily some of the best that we’ve ever seen on a handset.

The tech is capable of capturing video at a rate of 960 frames a second, playing it back at a speed the company claims is four times slower than the competition. The same Motion Eye camera is also sporting a new “predictive capture” feature, which has a motion sensor that starts to take a few pictures the minute an object enters the frame, and before you’ve even asked the camera to take a picture.

It then offers you the selection, similar to what you can see on a ‘burst’ on the iPhone. This is especially useful for when you are taking photos of an action scene, and will come in handy for all those times that you’ve been annoyed with your smartphone camera for being too slow in responding to you snapping — when in reality it may be you who is too slow to trigger a picture. The camera lens is also taking one more step towards even better light control, especially in nighttime scenes: this is something that all companies are improving, and this is one more example of headway being made.

Sony also maintains its commitment to ultra-high definition with a 4K display sporting HDR capabilities, the latter of which has become quite the buzzword in smartphone circles in recent months, courtesy of devices like LG’s recently announced G6.

It’s worth mentioning, of course that LG’s new flagship also sports Sony camera sensors. Same with the Google Pixel. Same with Apple and, well, a lot of top smartphone makers. Sometimes the Xperia line feels as much like a proving ground for the company’s imaging technologies at it does a truly competitive Android smartphone line.

Which is why some of the other features of what, at the end of the day, is one more Android phone, might stand out just a little bit more — and why Sony might be taking more leaps to try to differentiate itself. 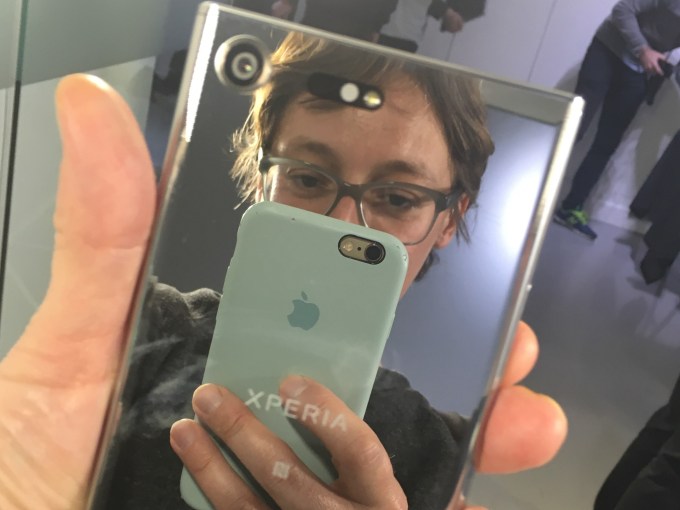 These include a highly polished chrome exterior for the XZ Premium, so highly polished and flat that it essentially feels like you are carrying around a giant mirror. I’m really not sure if this is what Sony intended, but it functions like a non-battery operated instant selfie checker (maybe the world’s first ‘selfie camera’ in that sense), or something you could use to take mirror selfies on the go — as I’ve done here. It also feels like a strange but sort of fun prop for checking people out without having to look at them (which I’ve also tried out, as you can see…) 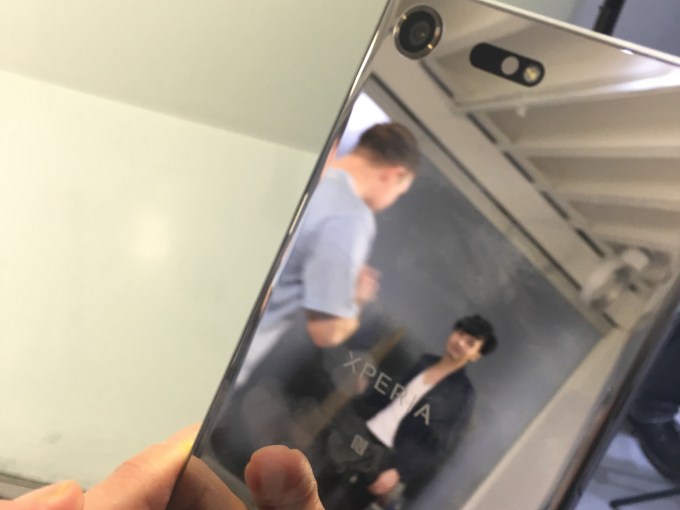 Other features that Sony is pushing in these new Xperia phones will be in the services. If Nokia is taking a pure-vanilla approach (at least for now) to Android, Sony is much further along in the game and looking for ways of standing apart from others in the mix. Among these are a deal with Amazon to stream Amazon content to Xperia phones. While Amazon integrates easily with the iPhone via iTunes, with Android users have had to fiddle around with sideloading or third-party software to get the same content, partly because Amazon has its own line of Fire devices, built on a forked Android version, which it’s pushed over other Android experiences.

That seems now to be changing, as Amazon looks to do business with Android OEMs on other things like integrating its Alexa voice interface. So here, Sony will be presenting a much more seamless streaming of Amazon content to its whole Xperia range — giving some more context and meaning to promoting its 4K display.

The Xperia XZs, the smaller version of the Premium, also features the company’s impressive new Motion Eye technology, shrunk down to a slightly smaller form factor, from 5.5 to 5.2 inches.

Also new on the smartphone from is the XA1 Ultra, an update on last year’s ridiculously large XA Ultra model that maintain’s the phablet’s 6-inch screen, tacking on a 23-megapixel rear and 16-megapixel front facing camera, for really, really detailed selfies.

As with past years’ announcements, the camera features are ultimately a heck of a lot more interesting than any given device. But interested parties will be able to pick up all three this spring.

The company also took some time this morning to highlight some of the more interesting concept devices it’s been working on. 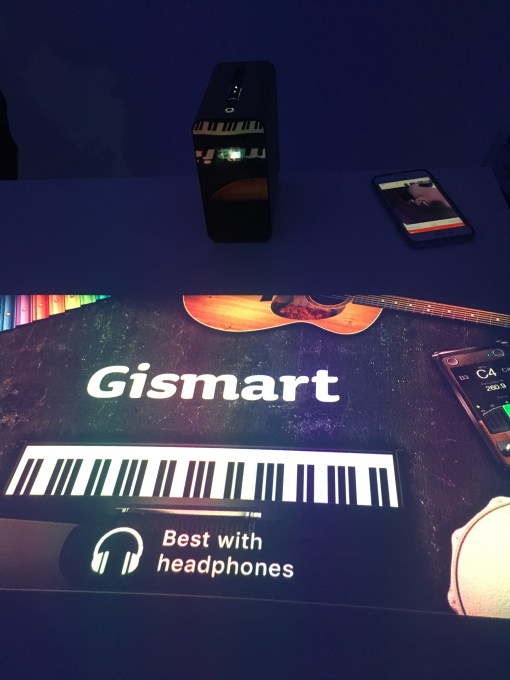 The Xperia Touch Projector is Sony’s latest take on interactive screens. The company has been showing off the device for a little while already as a concept design, and now it’s getting ready to ship it in select markets for €1499, starting first with Orange in France.

In essence, this is an interactive projector that works on tables — “turning any flat surface into a 23” HD touchscreen,” is Sony’s promise. This means playing games — it’s compatible with PlayStation 4’s remote playing feature and also all games on the Google Play store — or swiping through presentations, using more of Sony’s imaging technology to deliver the content, in this case its SXRD projection technology.

And as the projector leaves the concept phase, Sony introduced another concept design, this time for headphones. Playing on this new theme of “anti noise cancelling” earpieces to take into account our multitasking world, these are shaped like a donut and let you hear things while also pumping music, information and other sounds from your connected device.