Subscription-based toy company Pley.com entered the Disney accelerator last year with a toy rental business that would ship out toys like Lego, American Girl or Hot Wheels, which could be played with, then kept or returned, starting at $12 per month. Now that the company has exited the program, it’s debuting a twist on its earlier model. Pley has just launched a Disney Princess PleyBox subscription service, where parents and children are surprised every other month with an assortment of themed goodies.

During the course of the four-month program with Disney, the company found that kids didn’t want to part with their toys, which led to the creation of the new box type.

Unlike with earlier boxes, the actual contents of the princess box will remain a mystery, after the first.

Disney says that each of its boxes will include a mix of items that go beyond toys alone. The first box, for example, ships with a t-shirt, book and role play item, in addition to toys. Plus, the box itself turns into a castle that can be decorated then used as part of kids’ play. Future boxes will also transform in this way, turning into things like a boat or carriage, the company says.

The boxes help Disney not only by being another means to sell its merchandise, but they can also help it promote upcoming films. For example, the initial princess box being offered is a “Beauty and the Beast” themed package. While the box itself is inspired by the animated classic, it’s no coincidence that the live action version of the movie is preparing to release stateside next month. 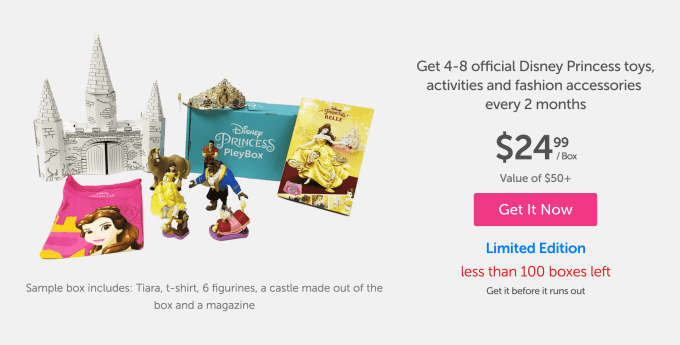 One of the problems with getting a toy subscription service off the ground is the fact that many parents – the real demographic being targeted here – don’t want to be tied into a monthly service. Kids have enough toys as it is, they’ll argue, we don’t need more.

Pley’s subscription tacitly acknowledges those concerns by having its box ship every two months instead of every month.

The box itself is $24.99, which comes in well under what it would cost to buy the items separately at retail, which could be another draw.

Still, the market for toy subscriptions remains unproven. Pley today has grown its service to 150,000 subscribers since its launch in 2013, but, like other subscription businesses, it faces the ongoing challenge of dealing with subscriber churn. Customers will opt out after a while, whether because their kids grow older, to save money, or because they reach a point where they feel like they have enough of the items being shipped.

Though a difficult market, Pley is not alone in trying to make toy subscriptions work. Amazon also recently announced its own toy subscription service, with a focus on monthly shipments of STEM toys.

The new Pley box is available on the company website here.