Since first being unbundled back in 2015 in the U.S., Alexa Voice Service — the voice-response software that powers the Amazon Echo and Echo Dot — has been one of Amazon’s chief tools to spread its services to a range of connected devices. Now Amazon is taking its strategy international. Today it announced that AVS will now also work in the UK and Germany, and will understand German and British English.

While Amazon is making Alexa available in three markets and three languages now, not all services will work everywhere. iHeartRadio, for example, is only live in the U.S. today, and so it will not work via AVS in Germany or the UK. Ditto Kindle book reading and traffic reports. Others like Amazon Music, which also expanded to Germany, the UK and Austria last November, will be usable, as will Wikipedia and local Skills — Amazon’s other huge API project that lets developers build their own services to work via Alexa’s voice response system. A full list at the end of this article.

AVS expanding to Germany and the UK follows Amazon also making these two the first markets to launch the Echo and Echo Dot last year. These are the only markets outside North America so far, but Amazon has ambitious targets for selling its own hardware — 10 million units in 2017, according to one report — so we may see more countries coming soon.

Alexa was arguably the biggest hit of CES earlier this year, where integrations appeared in phones, refrigerators, lamps, cars, and much more, setting the bar for any company — such as Google, Microsoft and Apple — building AI-based voice services.

Scale is the name of the game for these services, both as a lever for expanding a company’s bigger business (in Amazon’s case: e-commerce), but also as a way of amassing ever more data into its machine-learning database to make it work better.

Amazon’s rapid roll out of AVS has picked up on a moment in the tech industry — and in the case of AVS by hardware makers who may not have the resources to develop voice interfaces but see them as a promising sign of how we will interact with devices it the future — and it has spread like wildfire.

Alongside this, Echosim.io, a companion service built by iQuarius Media that lets developers and nerdy enthusiasts test out Alexa commands on the web, is also expanding.

Those in the UK or Germany who may have tried it before today might have noticed it’s been working for months. Amazon tells me that today is the official launch: the Echosim.io link that might have been used in the past outside the U.S. would have been linked to U.S., not localised, skills. 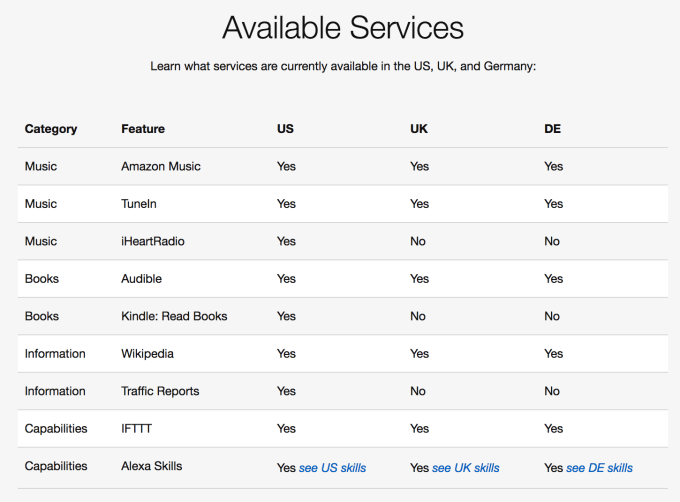