Apple may still be claiming that sales of its Apple Watch are “doing great,” but overall, the wearable device category is failing to grow at the rates forecasted earlier. According to a new report from eMarketer, wearables like Apple Watch and Fitbit were expected to grow more than 60 percent year-over-year from 2015 to 2016. However, the firm is now cutting that estimate down to just 25 percent growth this year.

“Smartwatches in particular,” the report said, “have failed to impress customers.”

Unlike other device categories, wearable devices have struggled to gain traction beyond early adopters. And with smartwatches, consumers struggle to find a reason to buy. 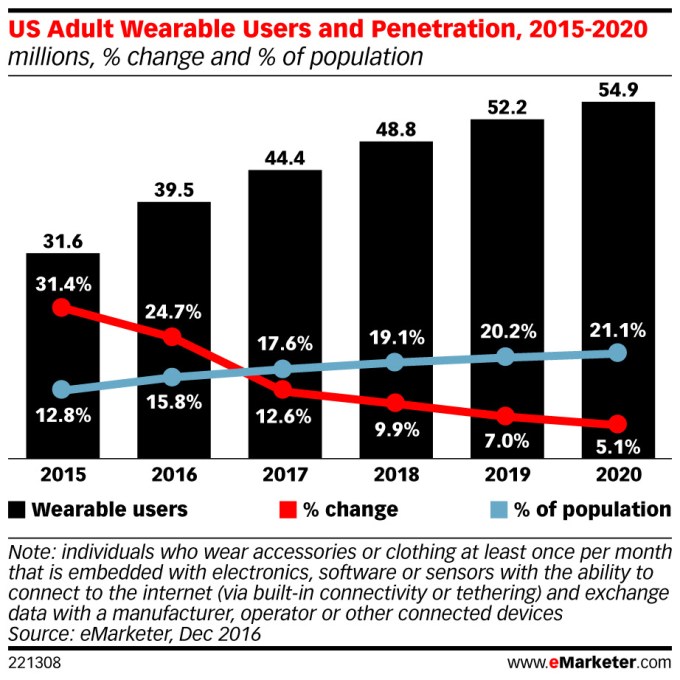 eMarketer analyst Nicole Perrin pointed out that before Apple Watch arrived on the scene, fitness trackers dominated the space. Today, fitness and health tracking remain one of the key selling points for the new crop of wearable devices, Apple Watch included.

But Apple hasn’t convinced everyone that a smartwatch is something they need, especially given the higher prices compared with standard fitness trackers for the watch’s enhanced functionality.

“Without a clear use case for smart watches—which have more features than fitness trackers, but significant overlap with smartphone functionality—the more sophisticated, expensive devices have not caught on as quickly as expected,” said Perrin in the report.

The firm estimates that 39.5 million U.S. adults will use a wearable device with internet connectivity at least once per month. However, this is much less than the 63.7 million eMarketer predicted back in October 2015. Use of wearable devices will only reach 15.8 percent of the population, and is only expected to grow to 21.1 percent by 2020.

eMarketer isn’t the only firm noting the troubles in the wearable market. This month, IDC reported smartwatch numbers were on the decline, with Apple dropping to fourth place after a 71 percent year-over-year decline in total shipments. Fitbit instead won the category with 23 percent of the market and 5.3 million units shipped in the quarter.

But even Fitbit could be struggling. New reports indicate that Fitbit’s Charge 2 may not be selling as quickly as expected, based on channel checks that found its inventory to be “particularly bloated,” along with weak demand for its Flex 2.

In addition, IDC had said this past October that smartwatch sales were tanking, with total shipments down 51.6 percent from the same time last year.

Apple had responded to IDC’s latest report not with hard numbers, but by touting the Apple Watch’s success as compared with its own prior sales. Apple CEO Tim Cook said that Apple Watch sales hit a record during the first week of holiday shopping, and that the current quarter is on track to be the best yet.

It’s not surprising that the Apple Watch sold better than before during the 2016 holidays – after all, this is the time of the year where people tend to increase their spending. Plus, Apple released a new version of its smartwatch ahead of the holiday season which likely contributed to the bump.

But that bump may not save the wearable category as a whole. 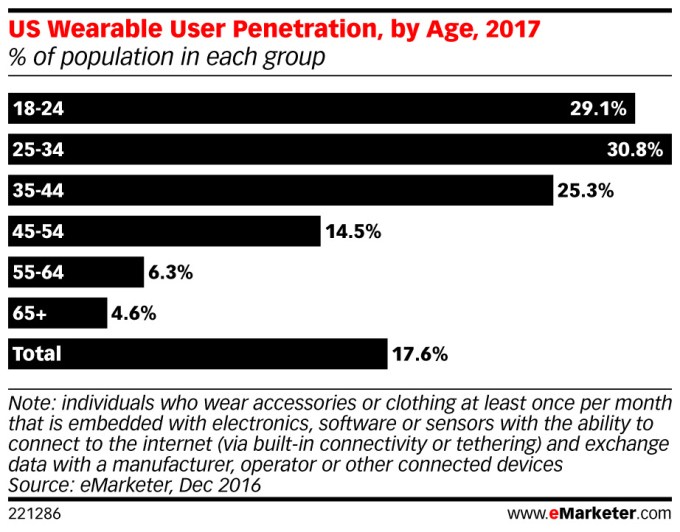 eMarketer’s new report also noted that younger people are more interested in wearables, as around 30 percent of those 18 through 34 will be wearable users in 2017 – a figure that’s 17.6 percent higher than the overall population.