Nintendo’s investors haven’t been happy with the performance of the new iPhone game, “Super Mario Run,” which has led to falling share prices over concerns with the game’s payment model. However, the game has still eked out a respectable share of downloads and revenue, according to new data from app intelligence firm App Annie. Looking back at the game’s first three days on the market, App Annie reports Mario pulled in 37 million downloads worldwide, and $14 million in revenue.

According to figures from the 3-day period of December 15-17, 2016, the U.S. was a large contributor to those 37 million downloads, accounting for 11 million of the total. The U.K. delivered 1.5 million downloads, Japan 7.5 million, and the rest of the world added another 17 million, says App Annie.

U.S. consumers also contributed $8 million to the total worldwide spend of $14 million, with Japan in second place with $3 million. The U.K. spent $600,000 and the rest of the world added another $2.4 million. 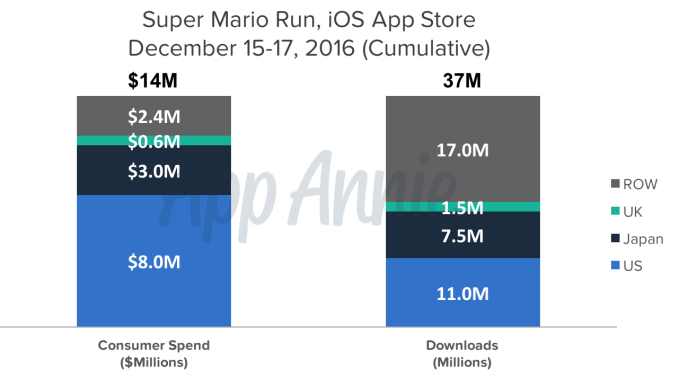 Another firm, Sensor Tower, also pointed out that Mario was the fastest mobile game to reach 25 million downloads.

It pegs Mario revenue at over $21 million in its four-day opening weekend (December 15-18, 2016). However, it’s worth noting that app analytics firms often come up with very different numbers from one another.

Could these figures have been higher had Mario not overpriced its app at a hefty $9.99 for the full version? That’s the real question here.

Despite consumers’ pent-up demand for a classic Nintendo title like Mario on the iPhone, a $10 mobile game with the limited amount of content that Super Mario Run offers (and with no plans to add more), has angered some customers.

Combined with the fact that the free tier offers only a few levels of play and the game’s requirement of an always-on internet connection, many iPhone users turned to the App Store to leave 1-star reviews. 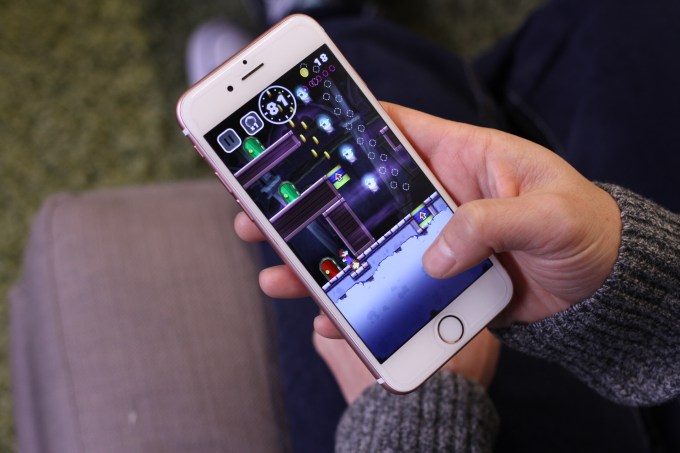 An early report indicated that around half of the reviews on launch day were from disappointed customers, leaving one-star ratings, in fact. Sensor Tower notes now that more than 63 percent of ratings from Japanese users are one star, as are 57 percent of U.S. users’ ratings. Price is the most mentioned keyword in these reviews.

Not everyone hates the game, though. Mario’s user base appears to fairly be split on their reviews, says app analytics firm appFigures’ CEO Ariel Michaeli. There are those who love the game and those who really dislike the cost and the online requirement.

What’s interesting, too, is that Apple seems to have prepared for Mario’s status as an App Store-breaking hit, and that may not end up being the case. 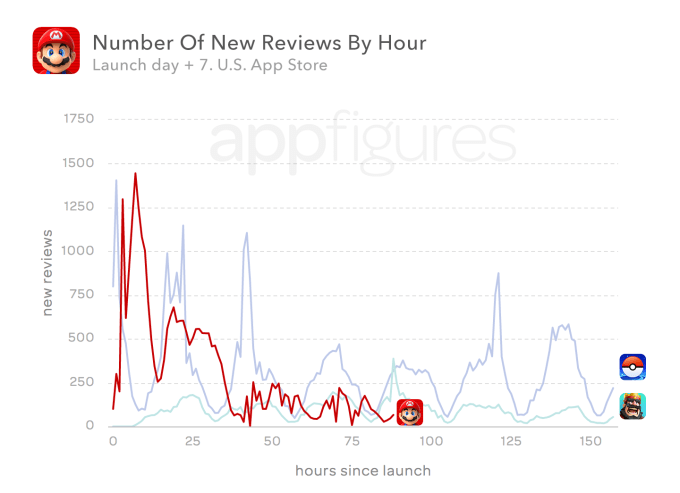 Michaeli discovered that Apple was delaying reviews from hitting the App Store by a lot longer than what’s normally seen.

“Early on, we saw a delay of around 40 hours, which is much longer than the standard 8 to 12 hour delay we see,” he notes, chalking this up to overaggressive caching on Apple’s part to make sure iTunes didn’t crash. By yesterday, that delay was beginning to catch up, but was still around 30 hours, he says.

However, what’s becoming apparent is that Super Mario Run users are leaving fewer reviews that Pokémon Go users did. (See chart above). At this point into the launch, Pokémon Go had 30,247 reviews versus Mario’s only 27,721 in the U.S. App Store.

This could be an early indication that the game is failing to engage users at the same level.

Of course, Super Mario Run is an entirely different type of game than the genre-defining Pokémon Go, which sent users out into the real world to catch and battle their mini-monsters. It took full advantage of the iPhone’s sensors and camera in its gameplay. By comparison, Mario is a one-handed endless runner that can be beaten fairly quickly.

Given the backlash and subsequent share price drop, it wouldn’t be surprising if Nintendo decided to adjust its strategy when the game moves to Android, or at the very least, on future Nintendo smartphone titles.