Pokémon Go, step aside. In the first 24 hours, Nintendo’s Super Mario Run has beaten the record-breaking Pokémon game in terms of day one downloads. According to data from Apptopia, Super Mario Run saw 2,850,000 downloads in its first day on the App Store, compared with the 900,000 Pokémon Go had pulled in when it was first launched. Rival firm App Annie puts the download figures much higher, saying Mario saw 3.5 million downloads just in the U.S. within the first 14 hours, and 10 million total downloads worldwide on Dec. 15th, its launch day.

Sensor Tower is reporting that the app has seen more than 5 million worldwide downloads on day one.

Numbers from other outlets are still coming in.*

App Annie also noted that the app claimed the top spot in the Overall, Games, Arcade and Action category within 4 hours of its debut. Sensor Tower disputes this, saying it took the game 6.5 hours to reach the number one position on the Top Free chart in the U.S. – slower than Pokémon Go’s 5 hours to do the same, when it debuted.

But Mario’s launch versus Pokémon Go’s is not exactly an apples to apples comparison (sorry). Pokémon Go’s worldwide rollout was slower – it was only live in a few countries initially, while the company scaled to meet demand. Super Mario Run, on the other hand, went live in 150 countries immediately.

Regardless of the discrepancies between the firms’ numbers, the figures indicate not only how much pent-up demand there was in the market for a Mario title that could be played on the iPhone, but also how well Nintendo’s marketing efforts – aided by Apple – have helped.

Nintendo heavily promoted the game pre-launch, which helped it with early downloads, too. Apple brought chief game designer and “father of Mario” Shigeru Miyamoto on stage at its iPhone event this September to announce the title. It then allowed Nintendo to list the game on the App Store before it was available to download – something it has never before done. It even offered a “Notify” button that App Store users could click to get an alert when the game arrived.

And when Mario launched yesterday, it took over the App Store entirely. It didn’t get just one banner at the top of iTunes desktop app – it got all of them. There’s no way an App Store user can miss Super Mario Run’s debut. Plus, as a free download, it’s able to convert more customers than a paid game would. 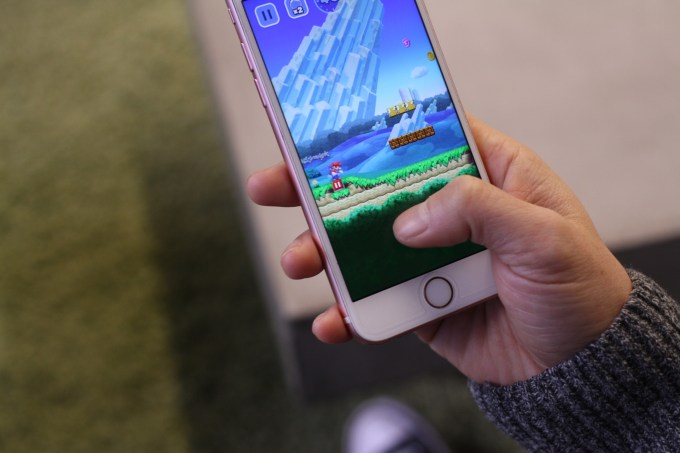 Nintendo is instead aiming to generate revenue from Mario through an expensive in-app purchase of $9.99 which opens up access to all the levels.

Already, there’s a ton of backlash about this on the App Store. Around half of the game’s 33,000 ratings are one-star ratings, Apptopia found. Apparently, people are upset over the small amount of free play before having to cough up the money to buy the full game. (Nintendo may later choose to drop its price to convert more free players to customers at some point, given the situation.) Others are angry that the app requires an internet connection to run.

However, many users are paying. Sensor Tower says that the game has earned over $5 million in the first 24 hours. Mobile Action puts these figures higher, saying it made $8.3 million in the U.S. alone on Thursday. But App Annie says it only pulled in $4 million worldwide on day one.

Users are playing for long periods of time, too. The average session length is 15.5 minutes, and players are averaging four sessions per day, says Sensor Tower.

Super Mario Run became the top ranked game by downloads across 60 countries immediately after launch, according to App Annie. 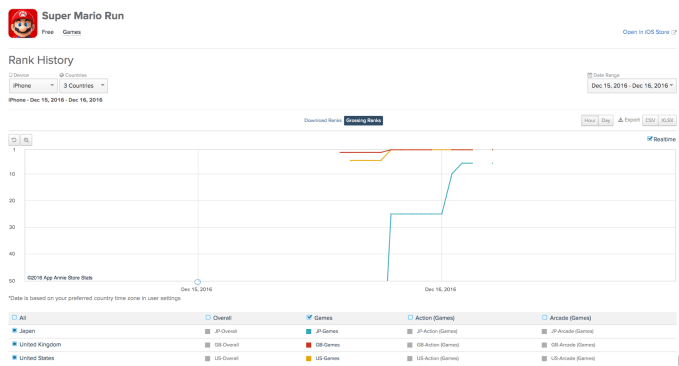 It has also updated its figures to state that the game become the highest grossing game in 11 countries in just a few hours after its launch.

App Annie’s website is currently showing Mario as having the Top Grossing position in 8 countries worldwide and the number one Overall rank in 49.

* Update, Friday 12/16/16, 2 PM ET: This post will be updated with the most current figures throughout the day. App Annie’s and Sensor Tower’s numbers have been added. 5:30 PM: More metrics added from App Annie, as well as its chart.