A lot of kid’s reading apps are a take on the traditional storybook and Amazon already has a Kindle for kids, but Amazon’s Michael Robinson who headed up the project, noticed his own kids were already using the phone to chat via text with their friends and family.

“We wanted to see what authors and illustrators could do with an app that told stories that way,” he said.

Kids can choose from hundreds of stories in adventure, fantasy, humor, mystery, science fiction and sports categories on the platform. Each story has a text message dialogue between characters and little readers can interact with the dialogue by clicking on the next chat bubble in the story’s sequence.

The app will also help kids sound out a hard word in case a parent or another adult isn’t around. This feature supports the child’s reading confidence and the word is added to their personal glossary if they need to look it up again later. 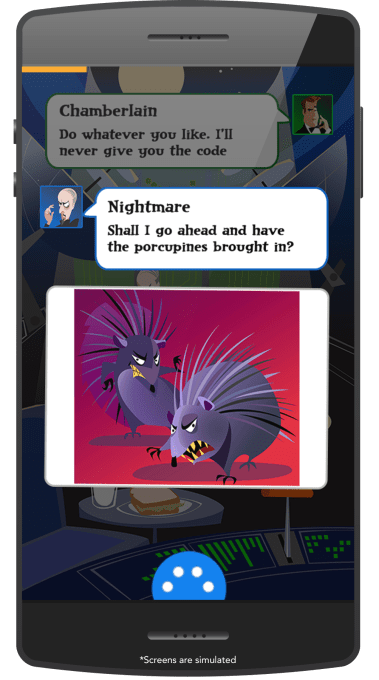 Some of the chat bubbles might ask a question to get the kid to think about a concept or to make them laugh. One story Agarwal pulled up for me was about an alien interacting with a little boy named Gordon over a strangely misdirected text. Gordon didn’t know anything about aliens and asked if the alien he was chatting with was green. The alien was put off by the question but later admitted he was, in fact, a green alien.

Humor is really important for getting kids interested in reading according to Robinson. “All the way to age twelve it’s the top thing they are looking for,” he said.

Rapids has hundreds of these short stories in its database so far and Robinson tells TechCrunch Amazon is adding “dozens more” each month. The idea is to make them fun enough and short enough to keep the kids engaged till the end.

But, should the kid not feel like reading and not be able to pull an adult into story time, Rapids has another feature called “Read to me,” which allows  a very robotic voice to read to the child. Imagine if Siri were in charge of reading you bedtime stories.

But Robinson says his own seven-year-old uses the feature and doesn’t seem bothered.

The overall idea is to get kids reading and interacting in a way that feels natural and gives them confidence to read independently — and that all starts with a good, short story on a device they’re already familiar with.

Rapids will offer an unlimited amount of stories on its platform for $2.99 a month, with a two-week free trial to start. The app is available for download starting today on all Fire Tablets, Androids and iOS devices.

*An earlier version of this story said iOS was not yet available. However, Amazon has informed us Rapids is now available to download on your iPhone.