Everyone loves a good plant in their home, but few have the time and dedication to keep it healthy over the course of the year. Changing temperatures and humidity levels paired with vacations or business trips can limit the variety of plant-life that most people can sustain in their homes.

That’s where the Grow Box comes in.

Developed by former Apple engineer Andrew Pletenetskyy, the Grow Box is a nearly six-foot box that can automate the entire process of growing a plant, whether it’s a ficus or an indoor vegetable plant or (I know you’ve been waiting for this one!) weed.

The Grow Box is the first product from 7Sensors, and has been in the prototyping phase for a while now. The company has successfully grown bell peppers and (yes!) a cannabis plant, among other things.

The Grow Box pairs with an app to let you designate the type of plant inside, and from there, Grow Box does all the work. Of course, green thumbs are able to fine-tune the environment within the Grow Box to experiment with their own plants. 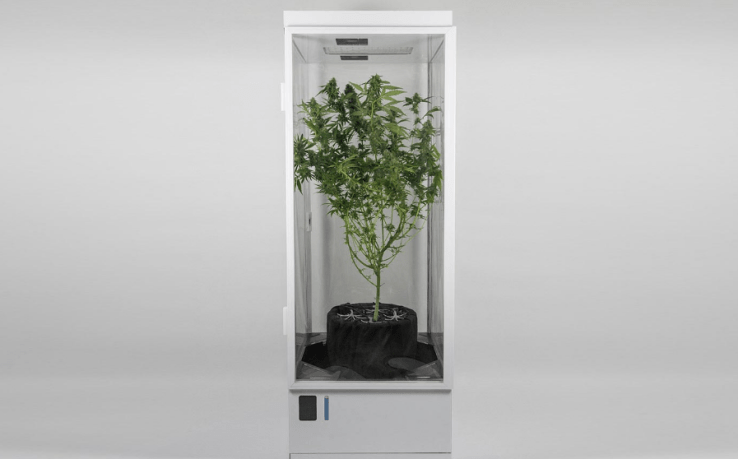 Grow Box controls environmental factors like light schedule, humidity, temperature, and air flow. Plus, the Grow Box is equipped with reflectors to ensure that the product is sustainable — 7Sensors says that the Grow Box can grow a plant with the same energy consumption of a single light bulb.

That said, I’m curious to see how many people will opt for fresh, automatically grown plants in exchange for an aesthetically pleasing home. That’s not to say that the Grow Box is ugly, but it’s quite large and will most certainly catch the eye of anyone walking into the same room.

Obviously, this isn’t the first time someone has tried to build an automated greenhouse for the home.

Leaf, for example, is a Disrupt Battlefield company that launched a plug-and-plant option for cannabis growers. Edn, on the other hand, is a wall-hanging garden that is meant to automatically grow herbs and produce without much interaction from the owner.

While the Leaf has yet to start selling, Edn recently became available for purchase for $499.

For now, we have no idea what the price point will be for a single unit of the Grow Box, but the company plans to launch a Kickstarter soon. We’ll be sure to keep you in the loop as soon as they do.