Marijuana is a sticky subject. Twenty-three states (and D.C) have legalized some form of medical use, but possession, growth and distribution are still illegal in the majority of the United States.

However, as is the case with most new industries, slow regulation hasn’t stopped innovation.

Leaf, a TechCrunch Disrupt SF 2015 Battlefield company, is leading the revolution with its automated “Plug N’ Plant” home growing system. Leaf’s device is a 4′ x 2′ box that will fit two plants, which will yield between 4-5 ounces of weed. 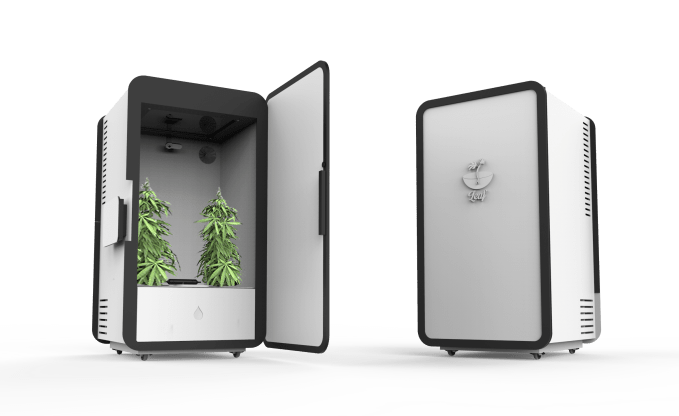 However, Leaf is much more than just a mini grow house. The system will monitor everything that your plants need to grow, including light, ventilation, nutrient levels and pH of the soil.

The system will also react to these measurements, meaning that if it senses that your plants are low on nutrients it can dispense more, or if it needs more light it can automatically brighten the environment. Users can also control these variables manually, effectively creating their own grow “recipes.”

This is all controlled from Leaf’s iPhone app, which will also serve as a social network for users to exchange recipes and share videos of their plants.

To do this, Leaf has incorporated a built-in HD camera, which will automatically create time lapses and even let users access a live stream of their (or their friends’) grow.

Leaf has received a strategic investment from Advanced Nutrients, a major player in the cannabis nutrient space. The company will be supplying Leaf with nutrients that they will put inside individual, disposable pods, allowing nutrients to be replaced like an ink cartridge in a printer.

However, this technology comes at a cost. The device will retail for $1,499, which makes it much more expensive than simply growing your plant in the ground. However, the company says that the machine will technically pay for itself after just a few months, as the “retail value” of 4-5 ounces (one growth cycle) is around $1,200.

Additionally, each grow will cost about $150 in nutrient cartridges and carbon filter refills. However, co-founder and CEO Yoni Ofir said that eventually the company hopes to drop the price of the actual device and generate its primary revenue from refills (à la Keurig).

Today, the company is opening up preorders of its device. Leaf will be available to users with a medicinal card in any of the 23 states that allow medical marijuana, as well as in the four states where marijuana is currently legal.

Customers can put down a $100 deposit to be the first to receive a Leaf when it ships in summer 2016.